We are on our way to Sandusky this morning to meet a few friends at Cedar Point. Scott and I have been wanting to visit the amusement park ever since we moved up north, and we are excited to finally get there to check it out. It should be a great time!

First, I want to talk about a full day packed with fun in Columbus.

We had an extremely early wake up call at 4 a.m. yesterday. In the car by 5 a.m., we set out for a little less than a four hour drive down to Columbus, Ohio. As a former Floridian, it still boggles my mind that we can leave the state and visit other ones (and countries!) in just a few hour’s time. Any road trip out of Orlando used to take a minimum of six hours!

We made great time and arrived in downtown Columbus around 9 a.m.

Some of you might remember I had been invited to join a fun summer race called the Drenched 5K this month. This was it!

The Drenched 5K is an event for runners of all ages and all levels: expert and beginners, joggers, and walkers alike.

Although I was disappointed to find out there would be no slip ‘n slide this go around, it was clear that we were going to get drenched in other ways…

All race participants and spectators were encouraged to bring their own stash of water balloons, water guns, and buckets for a giant post-race water fight!

Since we drove down the morning of the race, we were unable to check in and get our bibs and water balloons the day before. Other families, however, came armed with large tubs and coolers full of them!

Able to participate in the water balloon fight or not, we both expected this pre-race photo to be our last one in dry clothing.

The race took place at Genoa Park, with a lakeside view of downtown Columbus.

There were about five hundred participants in the race, and we all started at the same wave time of 10 a.m.

Before we even started running, I got soaked by misters, buckets, and water balloon launches from their sneaky staff!

On our first big curve, we ran through a giant water hose and were on our way. Soon after, we hit a “drop zone” with water balloons being thrown onto us from the bridge.

Obstacle (or fun) races are always tricky to figure out. Before any race starts, I always ask myself the following questions:

• Is it going to be real race?

• Are there going to be obstacles with wait times?

For this race, the answer was yes, no, and no.

Scott and I naturally took off at the front of the pack and set out with a fast pace. We didn’t expect to have to keep it up very long, before hitting an obstacle on our course. Surprisingly, the first thing we encountered wasn’t until about half a mile into it, and it just required us to run through bubbles.

This is where we started treating it like a timed 5K, even though no one was keeping track of the clock.

Scott sped off (I can never keep up with his race pace!) and I quickly followed behind him for the rest of the course. It took us up, down, and around the lake and through trails of the park and on an cloudy, breezy morning, it felt great!

For the duration of the race, I was still waiting for more “drenched zones” to pop up. At the 1.5 mile mark (about half way) we had a water stop and a Foam Zone to run through. Finally!

Running through a giant pile of foam brought me back to the foam and mud run we did last month for a second. That part was really fun!

For the rest of the race, I kept up a steady pace and ended up being the third female to cross the finish line! The first one had kept up a furious pace with Scott from the beginning, and he was fourth to finish.

Waiting for us both was a group of race staff, spectators and runners who were dying to get us drenched. For our last tenth of a mile, we got doused with water from buckets, giant water guns, water balloons, and misters.

There was no mercy!

I had the extra challenge of warding off this clown, too. 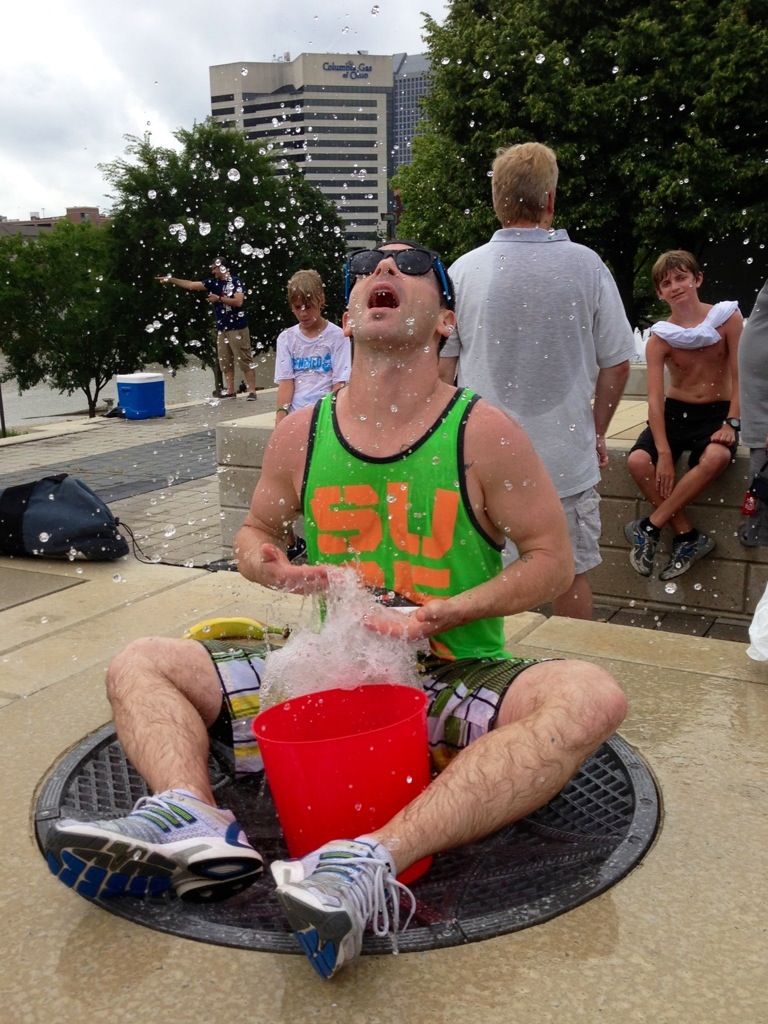 As he saw me running up to the finish line, he made sure to fill his bucket with water and drench me head to toe. When I asked to get a picture with him post-race, it did not surprise me when he did the same thing.

Sometimes you just can’t break the kid in them!

While waiting for the rest of the runners to finish and for the water balloon fight to start, we enjoyed sampling the small bites and beverages offered.

Scott was on a mission to drench, and his efforts did not go unnoticed. By the time the water balloon fight came around, he had more than a few people trying to “get him back.” Yeah… good luck with that!

Prior to showing up to the race, we expected more obstacles. While running it, I was a little disappointed to find out that most of the excitement took place before and afterwards.

Now that I know this race is one I can participate in to work on my race PR, I will treat it that way and clock my time if I get the opportunity to run it again.

Overall, we had a super fun morning! The water fights brought us back to our childhood summer days and we really enjoyed ourselves.

It appears as though several families did too!

Want to get drenched? There are still plenty of opporunities to get wet ‘n wild in the following cities!

If you sign up, remember to use my discount code just for Housewife Glamour readers! To receive $10 OFF any entry, simply enter the promo code: DRENCHEDGLAMOUR upon checkout HERE.

Now time for some amusement park fun! See ya tomorrow!

• Have you ever participated in a fun run? What is your favorite part: foam, mud, water, obstacles?

*Disclaimer: I was provided with free race entries from Drenched 5K. I was not compensated for this post, however, I will receive a small portion of any entry registered using my promo code. **#Sponsored**

Stress is inevitable, and stress as a response to

Not sure what the weather is like near you, but ju

Just in case you forgot, we can do hard things. YO

The biggest thing I’ve learned about living and

Fitness FAQs! Let’s compile some popular ones an

Are you Team Summer or Team Fall? 🌻🍂 Fall i

Consider this your Sunday reminder to fill your cu