I had been debating back and forth on whether or not to post on the next subject before the wedding, and finally decided it would have to wait until after the big day was over.  There were so many special touches Scott and I put into our wedding, it was hard for me not to share them ALL with you before the wedding day, but I’m excited to say that I can finally share it ALL now, post by post!

What the heck was that thing?!

From day 1, I really wanted to incorporate the Irish heritage into our wedding. Since Scott’s heritage is Irish & Scottish, he was totally on board with this idea.  Originally, we wanted to get married around St. Patrick’s Day and have different shades of green and white as our colors, green hydrangeas, Irish food…the whole 9.  But, timing for us & a wedding in March was impossible.

Knowing this, we both agreed to incorporate little things here and there that represented both, but mostly the Irish heritage.  So I hopped onto the computer and started googling “Irish Wedding traditions” and found several ideas right away.

My favorite Irish touch at our wedding was the unity ceremony called Handfasting.  We really, really wanted a different way to unite our lives during the ceremony than the standard unity candle, or sand ceremony and when I found this I knew it was something we HAD to do.

First, I hopped online to try to find the perfect cord for us…and big surprise, I didn’t find exactly what I wanted so I made my own!  It isn’t that difficult to make your own cord…but unfortunately, I threw our cord together literally RIGHT BEFORE the ceremony rehearsal (literally) and didn’t get to document putting it together like I wanted to.

Brides…you’ll see how fast the wedding week you took “off” of work goes and how many last minute projects to truly have! For this reason, I don’t have step-by-step pictures, but what I can tell you is what you would need to make a handfasting cord:

When I first tried to put a cord together, I started with ribbon only – I picked out 3 different types of each color (pink, green and white) and I planned on braiding those together first to create my own cords.  After a few failed attempts, I decided to call that task quits and search for actual colored cords.  I found the 3 colored cords pictured at The Sewing Studio in Maitland.  You might be able to find similar ones a JoAnn Fabrics or Michaels, but I’m not positive on that one.

Hanfasting cords have to be long enough to wrap around each persons wrist, so you should get anywhere between 4 – 6 feet of cording.  Knowing I had crosses at the bottom to hang, I opted for a yard and a half (or 4.5′) and it turned out to be the perfect length. 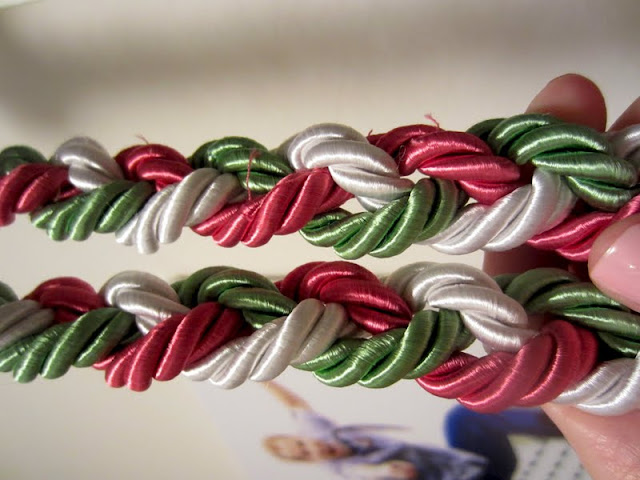 Next, I put the 3 cords side by side and put a heavy book on top of them so I could braid it together.  This was not challenging, but tricky to keep the same look throughout the entire cord…so be sure to see how much length and width you’re giving each part of the braid.

When I finished braiding, I took some clear duct tape and wrapped it around the two edges of the cord.  I wanted to add dangling crosses to each side, so this is where I put part of the pink cord I didn’t use through the loops of both crosses, dangled them on each end, and taped extra pink cording to the end of each side.

I got these beauties at Michaels in the beading department and thought they were the perfect addition! 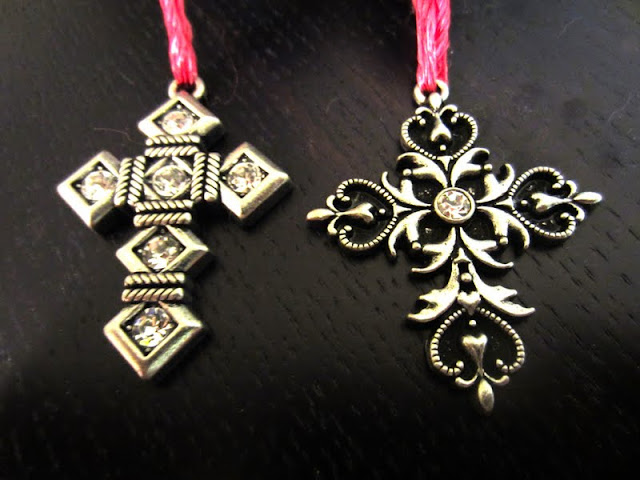 Since taped on dangling crosses doesn’t look the prettiest, this is where the ribbon comes in.

Cut two strips about 4 inches long of your ribbon of choice and wrap one around each tape gathering.  I used more clear duct tape to fasten the ribbon on the back of the cord, but ideally if I had more time I would have preferred to have sewn it instead.  And, VOILA!

We knew our guests wouldn’t really understand right away what exactly what we were doing tying ourselves together with this cord, so we decided to explain it in our ceremony program which read:

“An ancient Celtic tradition practiced when a couple could not afford a formal ceremony, or when a priest could not be found, this involves literally tying the couple together by the wrist in a sign of unifying their lives.  A couple would traditionally only be bound for one year and a day, sparking the phrase ‘forever and a day,’ although we plan to be bound for life.

They will be wrapped by a cord of three ribbons: a green one representing him, a pink one representing her, and a white one representing Christ.  The pastor will form a unity symbol around their wrists with a cord, and then he will tie it in a knot to seal the unity.  This is also where the phrase “tie the knot” originated.”

When we explained the idea of Handfasting to our Pastor, he loved what it represented but also saw it as a challenge when it came to tying the thing correctly!  Luckily, he practiced on the Groom & a groomsmen before the ceremony, so it went perfectly.

Another Irish tradition I had on the big day was incorporating things into my wedding day attire.  It is thought of to be good luck for the bride to wear blue on her wedding day, but I wasn’t too sure about that one…so we added blue a different way – in all of our bouquets!  In my bridal bouquet, as well as in all of the bridesmaids bouquets sat 2 blue pins: 1 representing me and 1 representing him, standing together.

Next, I found that it is also tradition for and Irish bride to wear her hair in a braid.  Since I wanted to wear my hair mostly down, I though this might be somewhat of a challenge.  It took me the LONGEST time to decide on a hairstyle…since I kept going back and forth on whether I wanted a flower, a broach, a headband or what…and how to incorporate a braid into it.

With the help of my bridesmaid Lauren & my hairstylist, I decided on using fresh lime green orchids to pull it half up. On that side of my hair that was back, we put 2 finely braided pieces that met in the middle at the flowers.  Not many people would probably notice this, but when pictures finally come back I’m sure it will be noticeable at least in a photo or two – and I knew it was there…so it made me happy.  Once again, the braids represented 1 for me, 1 for him and the two of us standing together.

Last, we wanted to have the Scottish heritage represented as well, so the best way we thought of doing that was having a bagpiper!  He was great, and played during our guests arrival to the church ceremony, as well as on their way out to the reception.  He was in full Scottish garb, and we got a lot of compliments on him.

Honestly, I didn’t get to see this…because I was at the church earlier than he was supposed to show up – but from what pictures I’ve seen, he looked great!  Unfortunately, I don’t have any of my pictures back yet to share ours with you, but you get the idea: 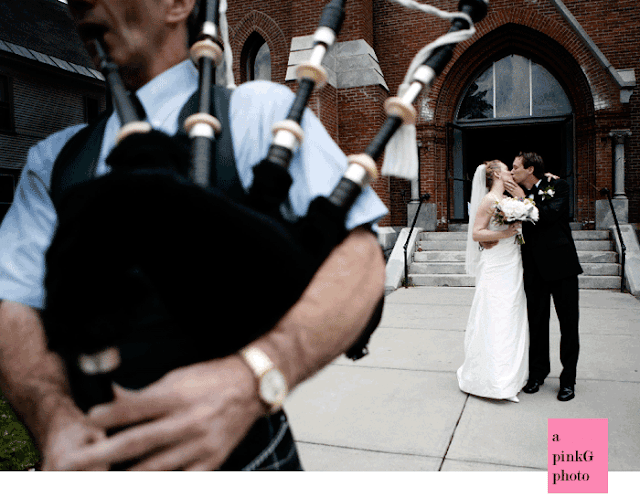 Little by little, I’m starting to learn more about the Irish & Scottish culture and next on my list for of expanding my new heritage is to learn how to cook some of their famous dishes!

I’m sure Scott wouldn’t complain…Shepard’s Pie is one of his favorites and it almost made the appetizers list.