Hi friends! This week has been a fun one for me because I have been seeing tons of photos and memories pop up from the weekend.

In case you missed it, I traveled home to Orlando, Florida for the 25th Anniversary celebration of the Orlando Magic Dancers! As a member of the team for four seasons, I was thrilled to get the invite for a special halftime performance and knew I wouldn’t miss it for the world. I was also excited to have my best friend and teammate, Alex, join me!

Day one of our trip was filled with reuniting with family, barre and brunch, laying out in the warm weather, and time out and about with friends and former teammates. 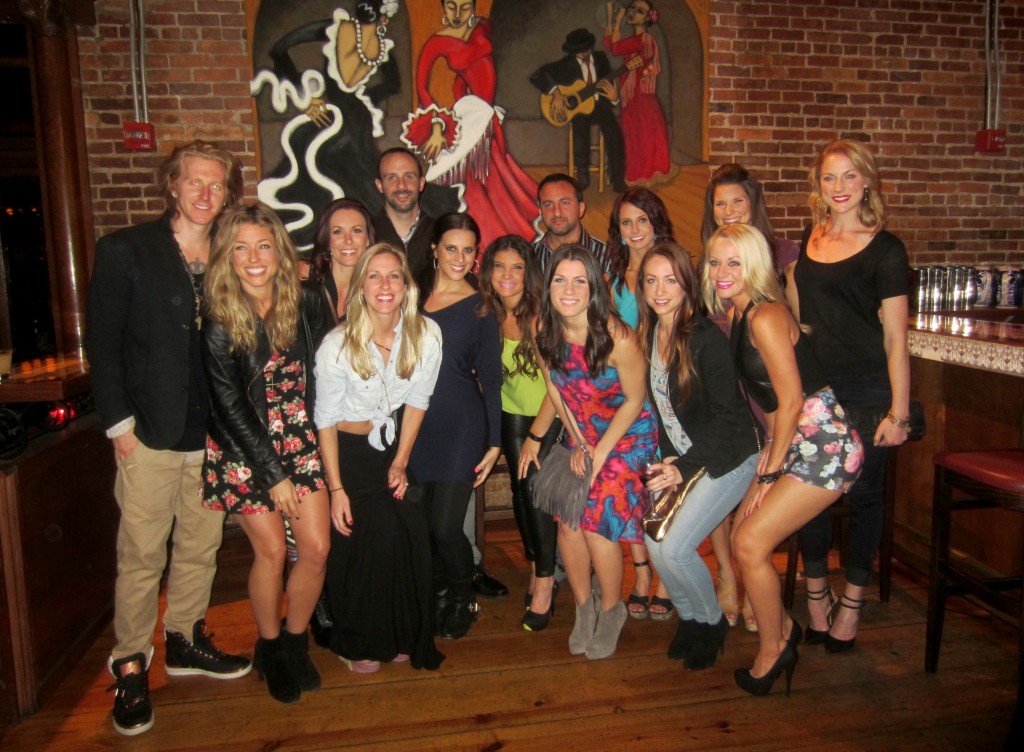 I spent the majority of this morning compiling photos for this post, so without much time to chat I am overjoyed to finally share them and details of the event with you!

Sunday was one a lot of women had been looking forward to for over six months! All former and current dancers got together and practiced our halftime routine that highlighted all of our years served on the team in segments of five years. As a member of the 2007-2011 teams, I was in Segments 4 and 5.

By Noon, a group of nearly 130 women gathered, practicing counts while getting ready to take center court. 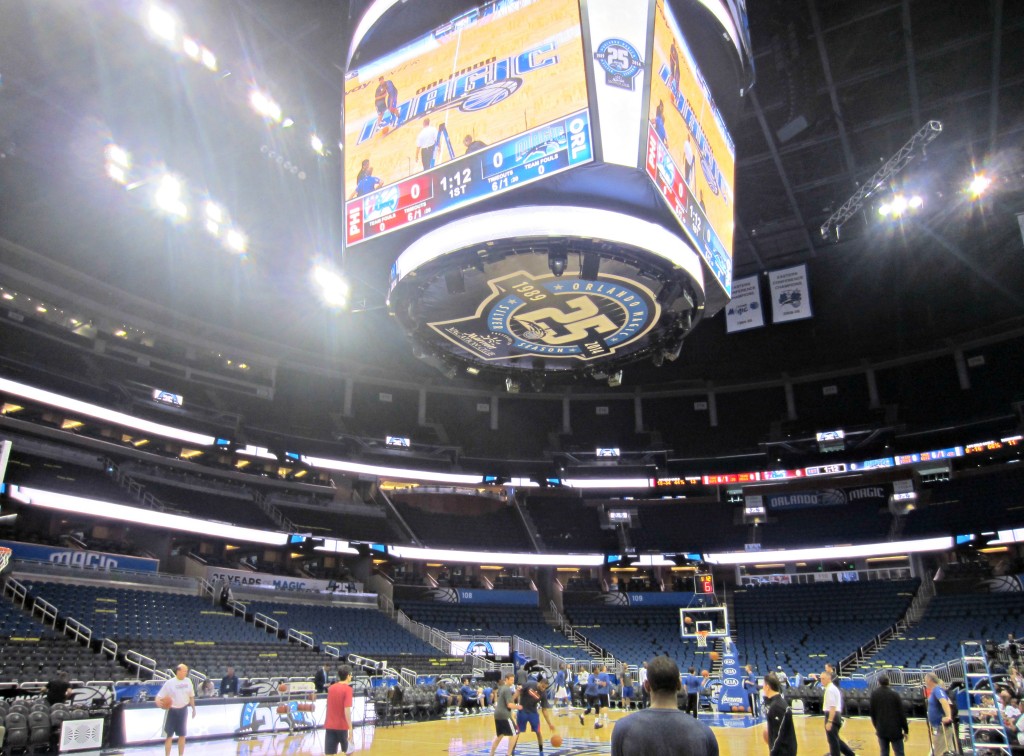 As soon as I made it through the tunnel all of the warm fuzzies I used to get while practicing on this arena came right back. I really missed this court!

While each segment got blocked on court, the rest of us (not in the section) caught up on the sides and enjoyed the pre-game environment we have all experienced before. Before long, it was my turn to take the court and I really couldn’t stop smiling. 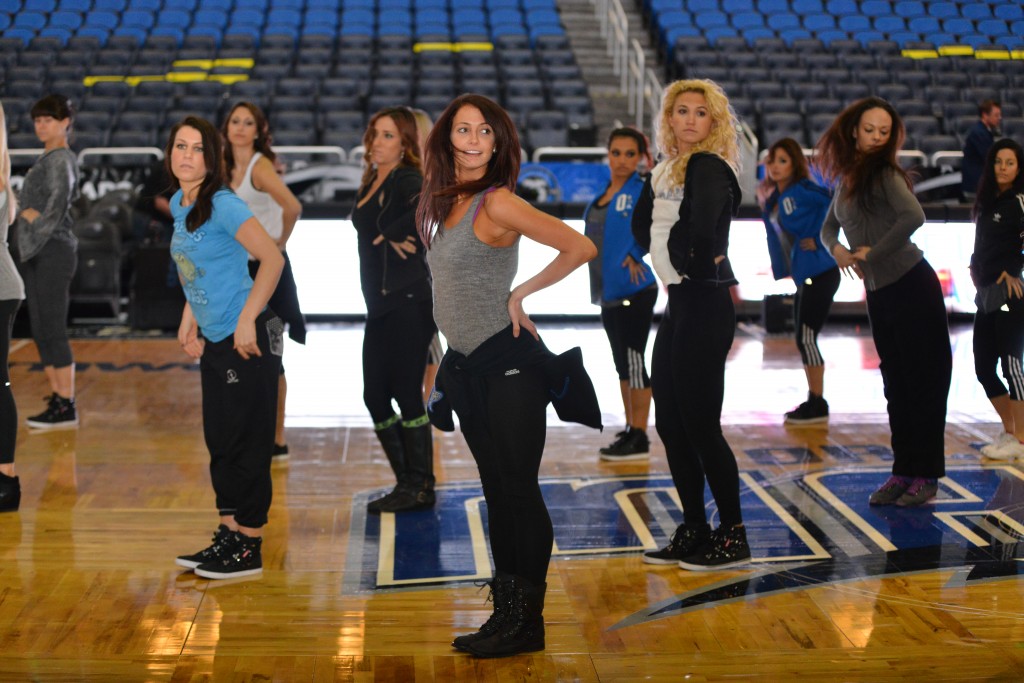 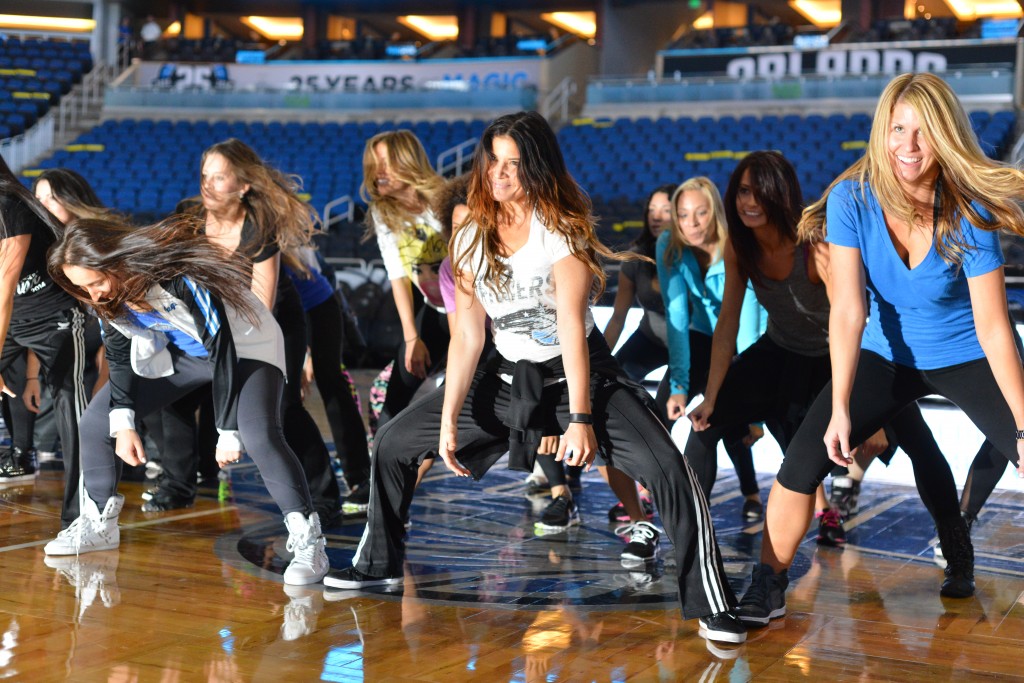 With girls I formerly danced with by my side, and a group of others I have come to know over the years just as well, we all joked, laughed, and had a ball being all together on one court again.

We perfected our movements and all couldn’t wait for game time! 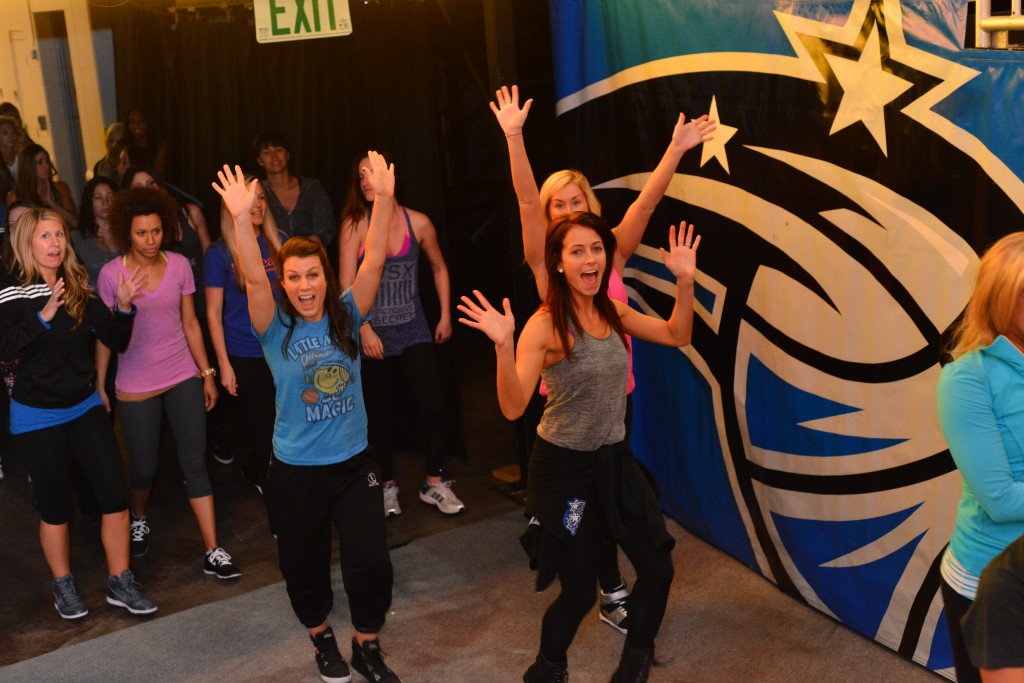 As we wrapped up our final runs, my coach, Jeanine, asked us to make our way into the stands to watch the video that would be debuting each segment. Seeing twenty five years flash by in photos had us all simultaneously laughing and tearing up!

In just a few minutes time, memories of auditioning, taking photo shoots, dunking basketballs, traveling overseas, and performing on court came right back. It was a really neat thing to watch as a group.

As we exited the court, we all found our own spots in one of the locker rooms to start getting ready. We had about two hours, but it went by in a flash while we caught up and had fun putting on our makeup and getting our hair done together.

By 4 p.m., it was time to take the court again for a group photo!

It’s always a bit of work to gather over a hundred women together, but somehow we all managed just fine. I’m sure all of those years of practice helped out!

Next on the agenda was a pre-game reception, but before we left I grabbed a few of my former teammates and enjoyed the court access.

They basically had to kick us off the court. Nobody wanted to leave!

Before heading upstairs, I met up with Alex in the main entrance to show her around the arena.

I danced three seasons in the Amway Arena, which was the team’s original playing grounds. This brand-new, state of the art arena opened on 10-10-10 during my last season as a Magic Dancer!

While walking the concourses, I found a lot of things that made my night.

This was one of them.

As we made our way around the third floor, we ran straight into the entrance of our reception. I was handed a name tag with the seasons I danced displayed on it and a goodie bag full of Magic swag! 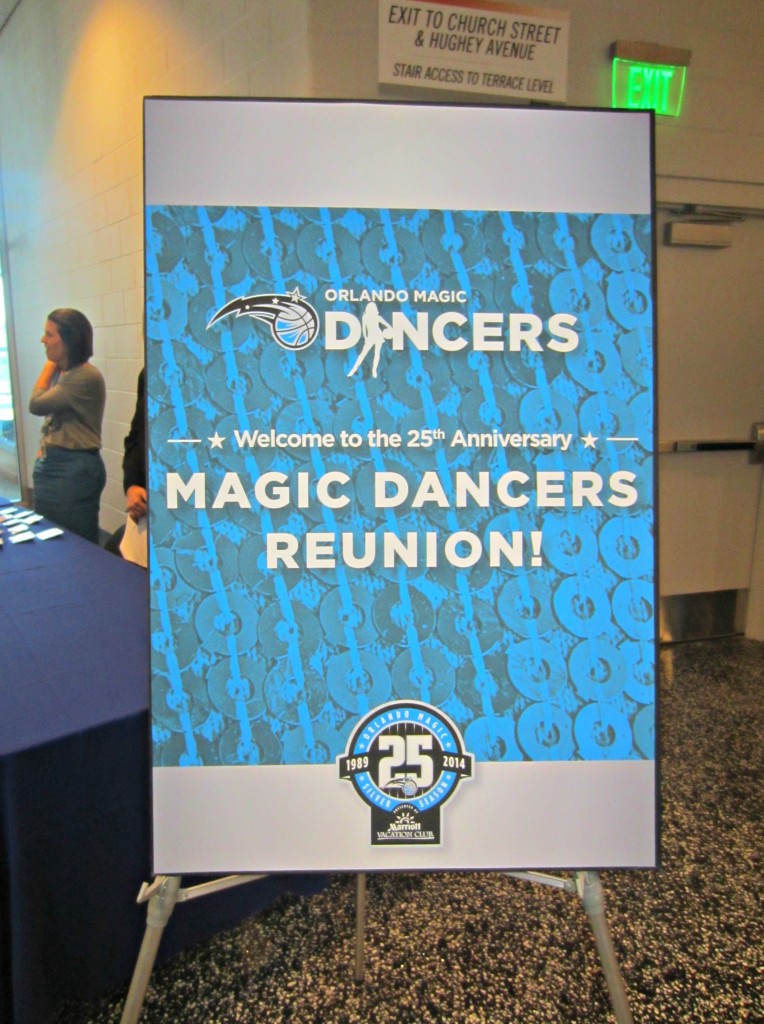 Inside, I found a very excited group of dancers of all ages accompanied by friends, family, and even their little ones! 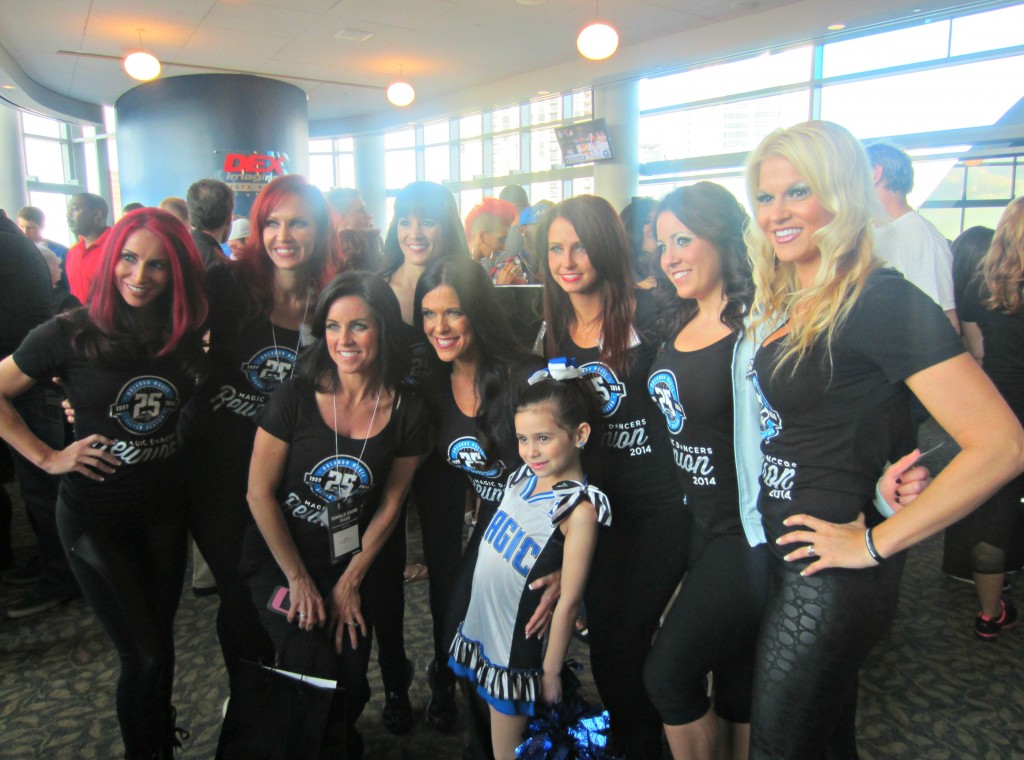 Throughout the entire weekend, I was so thrilled to see the faces of women I now call my sisters. Here is my original Big Sister, Kim, from my rookie season! 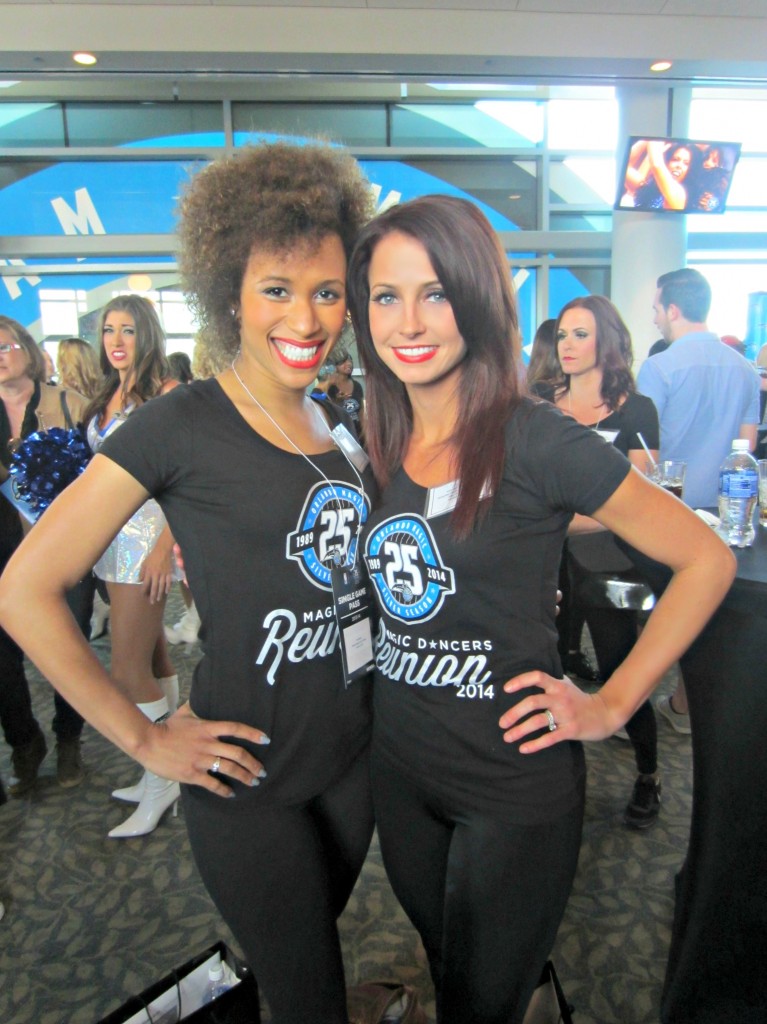 She currently dances for the Chicago Bulls, and we definitely had interesting conversations exchanging stories about dancing in the NBA again for different teams.

Throughout the reception, I kept running into more and more familiar faces. It was such a treat! 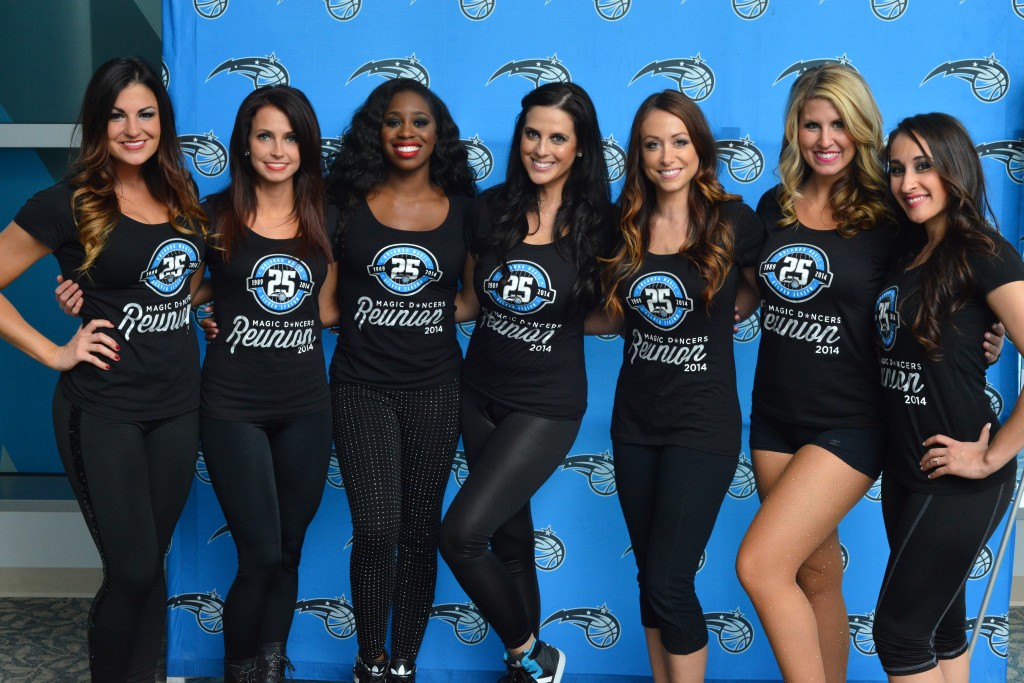 Seeing groups of these girls come together all at once brought me right back to my seasons dancing with them. Most of us stay in touch quite a bit, so it’s as if time never even passed.

One of the only things that has changed around here is Malia, the daughter of our coach, Jeanine. I remember her dressed in the cutest little miniature-sized sparkly number during my first year of  tryouts. Now she’s just shy of seven years old, up to our shoulders and dancing with the mini team!

Just like those six years, the reception flew by and it was time for Alex and I to meet up with my parents and take our seats. I’m so glad we made by intros!

There were a lot of things I remember about this arena, but a lot of new elements as well. It was neat to sit back and watch a quarter from the stands before I needed to head down and focus on halftime.

Right after the first quarter, I made my way to the locker room, freshened up, and ran through the dances again. For someone who still dances on an NBA court, I was quite nervous!

When the buzzer went off at the end of the first half, we were all lined up and ready to go in the tunnel. I don’t think one person wasn’t smiling ear to ear!

Each section got introduced along with the video we previewed earlier that day. Even though I had seen it a handful of times by then, it still gave me goosebumps. It was finally our turn to take the court again! 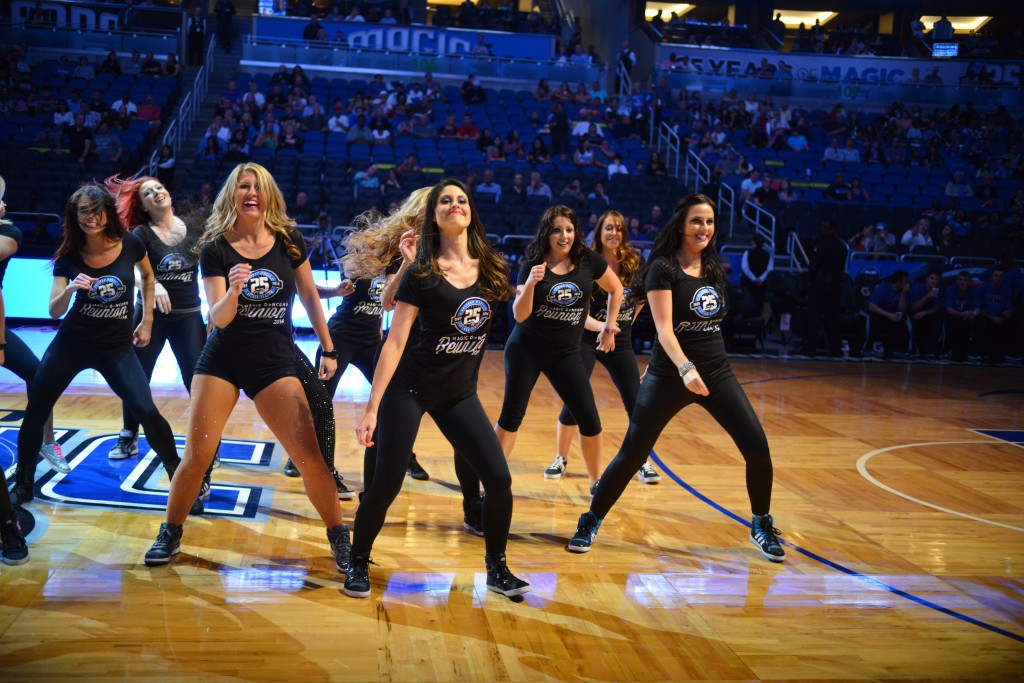 After the end of Segment 5, all of the dancers joined us on the court for a finale. Dancing and performing with all of my Magic Dancer family was such a blast!

Eventually, we got kicked off the court again, and we all made our way back to the dressing rooms. It was hard to say our goodbyes, so a lot of us continued to take pictures and pretended like we were going to see each other again in practice the next week.

Attending this reunion couldn’t have come at a better time for me. As this season dancing for the Pistons comes to a close for me next month, I am reminded of what it truly feels like to be a part of a sisterhood and family in the NBA. I still feel like a newbie to my team here, and there were a lot of things I completely forgot about my previous years in Orlando until I experienced them all over again.

I feel SO blessed to be a part of such an amazing, life long sorority of incredibly talented, beautiful and wonderful women I now call my sisters. Leaving brought up a ton of bittersweet emotions, memories of “quotes” I can’t believe I ever forgot about, and extremely sore abs from laughing so hard the entire time. 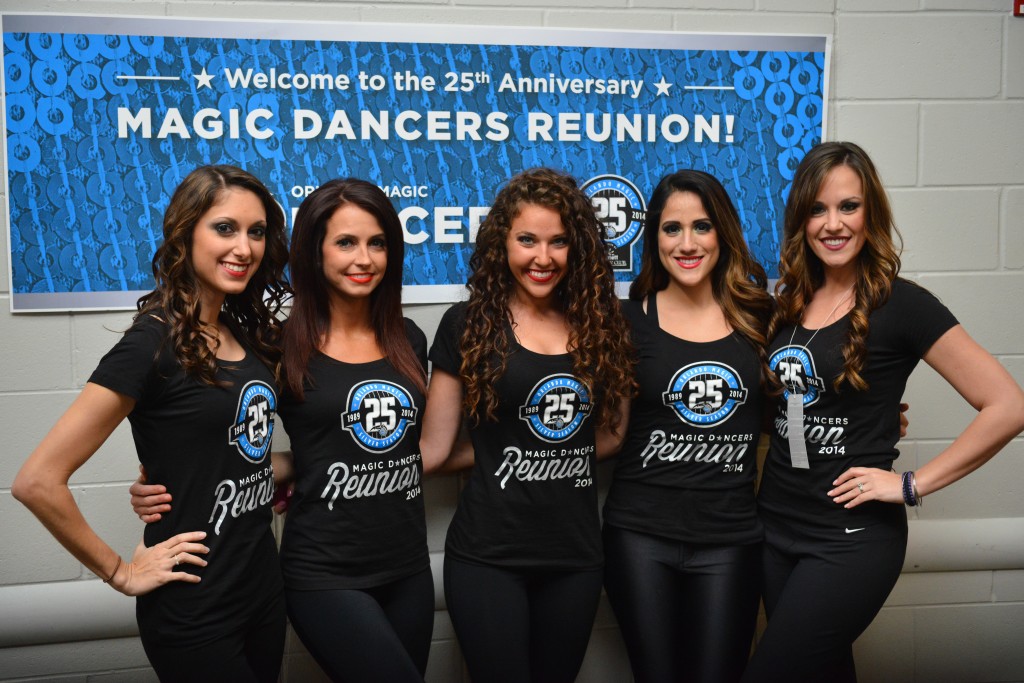 As I made my way back to the stand to meet my parents, it made me smile to look around and see my fellow alumni join the crowd here and there. I knew they were feeling what I was feeling, and that we all secretly hope to do it all again just five years from now!

After the game, I suggested we go to the rooftop bar to show Alex where Scott and I used to spend a lot of our nights after games.

Right on top of the arena is where Scott and I said our goodbyes to our Magic family just a year and a half ago. With the majority of everyone I grew up with still in town, I am very grateful to have the opportunity to visit both my parents and my friends when I come home. This time I even got to share it with a new friend from Michigan! 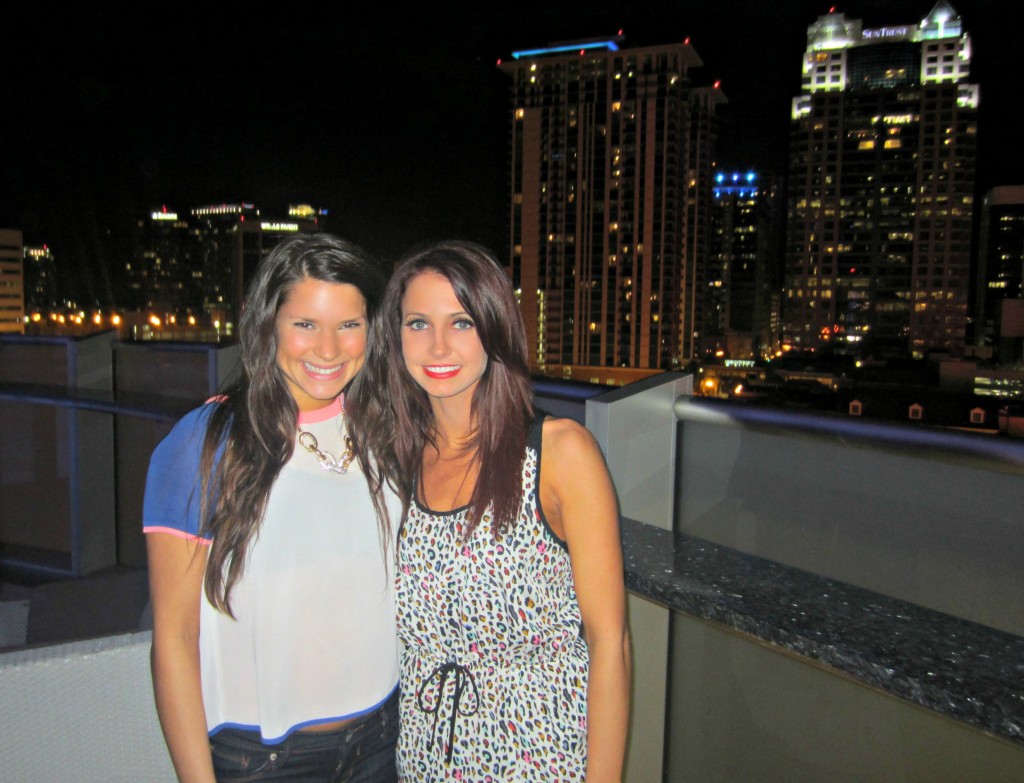 I feel like I continue to ramble on and gush about this memorable trip home, but I am going to stop there. I owe a big THANK YOU to Jeanine (my coach), Cherie (my assistant coach), and every dancer I got to hug and see make my weekend.

Here’s to the next one being just as amazing!