I’m coming to you this afternoon with an extremely heavy heart.

When I heard of the news of the two separate shootings that took place over the weekend in Orlando, my heart broke for so many. I am praying hard for the families that have been broken, the souls that have been lost, and the communities that will never be the same in Orlando. Tragedies are always hard to take in, but this one literally hits home to a city I was born and raised in, filled with some of the most kind and loving people I’ve ever met.

Stay strong, Orlando, we are praying for you.

With that said, it took me a little while to tune back in and share all of the things that made me happy this weekend. Just in case you’re looking for something lighthearted to read today, I thought it wouldn’t hurt to continue on with a normal weekend recap on the blog today.

My Saturday morning started with an upper body workout in the living room followed by breakfast and a little tidying up before it was time to get ready and head out to the City.

We had plans to meet up with a group of friends in Madison Square Park, and we were looking forward to a day of exploring afterwards!

The Big Apple Barbecue Block Party is an annual, open-to-the-public event and music festival that brings out the best barbecue in NYC and America.

As soon as we got off the subway, we could hear the live music, see the smoke surrounding the park, and knew exactly where to find the grub awaiting.

We didn’t arrive until about 1:30 p.m., but there was still plenty time and room for us to wander and taste some delicious eats.

Our friend, Erin, claimed a table at The North Side of the park, which proved to be less crowded, cooler in temperature, and a great location to catch up over a full plate of ‘cue.

Since this was our first year in attendance, we weren’t sure where to start. Some of the lines for barbecue were out of control! I don’t know much about the differences, but I will tell you that Salt Lick had the biggest line the entire time we were there. I haven’t been able to try it for myself, but we heard that there is plenty of other delicious barbecue to eat, sans the lines.

We found a short wait at Skylight, and Scott and I each ordered a pulled pork sandwich topped in coleslaw. I’m pretty sure that mine was gone about two minutes after this photo was taken. 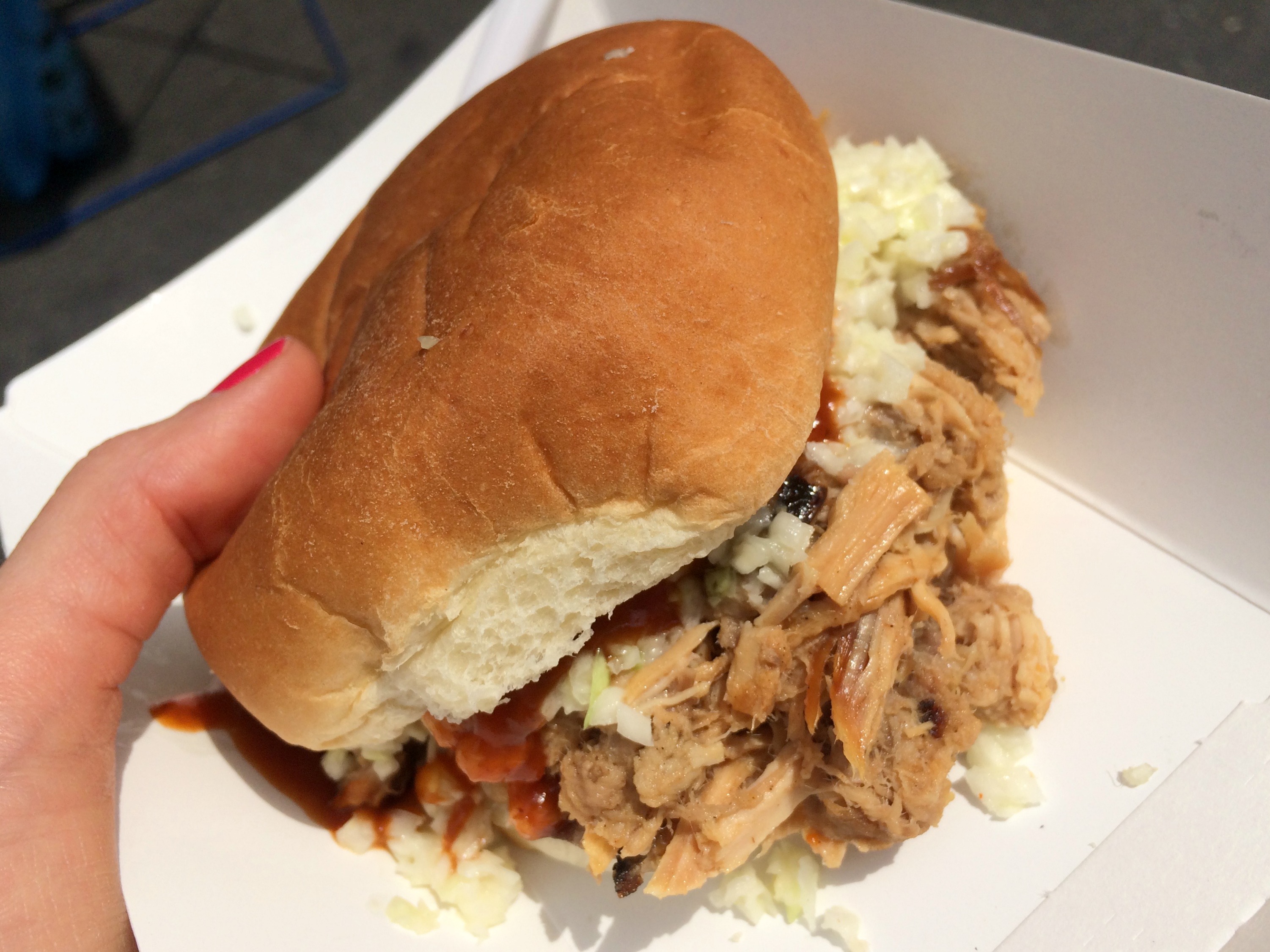 It was so good! We weren’t the best planners, and we realized that we should have split a sandwich to allow more room to try other places and menu items. Scott ordered a plate of ribs and baked beans from Dinosaur BBQ which was great, too. (I nibbled.)

We didn’t get to hear too much of the music, but it was a great festival to enjoy with friends or family. There were a lot of kids and dogs in attendance, too! We’ll definitely be looking forward to scoping it out again next year!

Since we were already close to Midtown, we decided to kill a couple of ours by walking around until it was time for Scott to go into work. We took our time walking in and out of stores, and may or may not have shared a couple of coffees and slice of cheesecake.

(It’s still crazy to us that we can walk by landmarks like the Empire State Building on a casual Saturday stroll!)

I headed back to Brooklyn around 4:30 p.m., and I had just enough time to freshen up before I met my friend Hillary downstairs for a fun night out.

After a quick change into jeans, I was on my way to Long Island with my friend, Hillary, and her friend, Sarah.

Hillary’s brother has been working with the band Rebelution for over ten years, and she scored us some great tickets and back-stage passes to attend their concert at the NYCB Theater at Westbury that night!

I have to admit that I had never heard of Rebelution prior to last week, but I’m so glad that has changed. They are awesome!

The band is based out of Santa Barbara, California and all of their music has a very chill, beachy, feel-good vibe. I wanted to be in a bathing suit with a margarita in my hand the entire time! If you get the chance to see them on tour, I’d recommend it for sure.

You can listen to all of their music and albums on Spotify. (Some of my favorite tracks are Know It All, Free Up Your Mind, Outta Control, and Lay My Claim.) I’m enjoying listening to their songs online, but they were so much better live!

We had the opportunity to hang with some of the members of the band before the show, and they are all so nice and very easy to talk to. Sarah and I became big fans by mid-show, and we all had a wonderful time. Thanks for taking us, Hillary!

We didn’t have much planned for Sunday outside of church in the City, followed by an afternoon in Astoria to hang with our friend Lauren. She randomly ran into a friend that we went to high school with on the train the night before, so the four of us met for brunch mid-afternoon at The Shady Lady.

It’s the perfect spot for a summer brunch! They have a great outdoor seating area and a lot of unique menu items to choose from. The portions are huge, so Scott and I split an order of the Astoria Hot Brown Brunch (open faced boneless fried chicken, bacon, grilled tomato, Swiss cheese morney sauce, Texas toast) and a side of cheese grits. Wow … it was delish.

It was one of Lauren’s first days off in a while, so we decided to spend the day relaxing outdoors. We walked over a local park overlooking the Hudson River and took in the scenery.

It was beautiful out!

We planned to head back to Brooklyn and cook dinner at home, but we saw a few of her friends hanging out on the patio at The Strand Smokehouse on our walk back to Lauren’s apartment.

We joined them for a drink, which if course turned into a couple of hours of chatting and lounging. Why not, right? Clearly, we weren’t going to make it home to make dinner.

Our table did a solid job at polishing off this plate of goodness. There was plenty of meat to go around, and I especially loved the macaroni and cheese and cornbread. (Isn’t that the biggest piece you’ve ever seen?) Well done, Strand Smokehouse.

With extremely full bellies, we eventually made it back to the train and took the hour commute home to Brooklyn. Who knew that our weekend was going to end up so eventful and so full of barbecue? Life is quite the adventure these days …

I guess that’s it for today, but I’ll be back tomorrow with something fitness-related to share!

» Linking these Weekend Snapshots with Erin and Katie

• What is your favorite thing to order at a barbecue restaurant?

• What (new-to-you) band are you loving right now?

Have a great Monday!

Showing you easy ways to eat healthy, stay motivated, switch to safer products, and move every day ... with littles. 👉🏼 lifeinleggings.com.