Hello, hello! I hope your Monday and week is going well so far.

This weekend passed at the regular warp speed most of them do, and somehow we went from full blown hot summer days to cool fall feeling nights. I swear, Michigan will make up it’s mind one of these days.

Actually, I don’t. After living here for just shy of two years, I have learned that the weather here is c-razy and disappointingly unpredictable. Always expect the unexpected.

Anyways, today I am delighted to share a fun and cultured outing Scott and I embarked on with some friends last Friday.

Any Michigan local is familiar with the term DIA. The Detroit Institute of Arts Museum is located in Midtown, Detroit and has “one of the largest, most significant art collections in the United States,” according to Wikipedia.

Since I had no idea just how impressive this museum was, I’ll continue… “In 2003, the DIA ranked as the second largest municipally owned museum in the United States, with an art collection valued at more than one billion dollars” with over one hundred galleries.

The architecture is notable, but sadly, I was unable to capture a picture of the outside since it was dark and raining heavily when we walked in. I’ll also spare you the pictures of me looking like a wet cat.

As Oakland County residents, we were granted free admission and headed straight to the cafe. With the same friends (Alex and Alex), I visited the same cafe (Kresage Court) we stopped by on my birthday weekend. 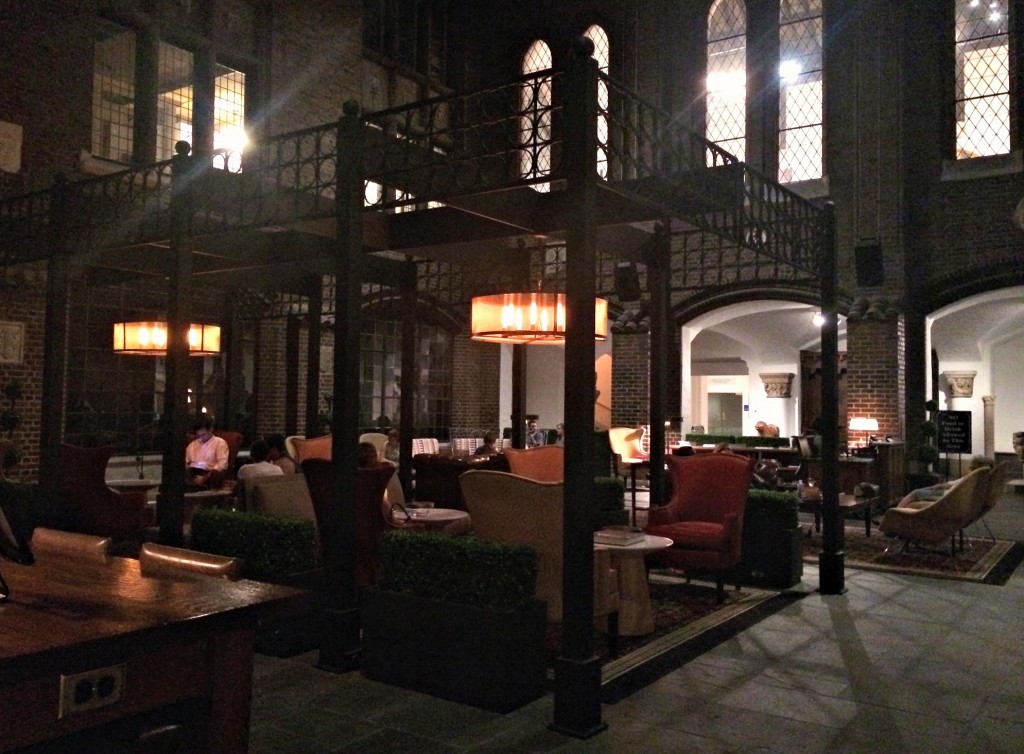 The ambiance at night turns into more of a social hour and we would have loved to have grabbed a hot beverage and relaxed for a bit after dodging the rain outside. But, with our late arrival of 8:30 p.m., we only had an hour and a half to explore the art.

After a quick lap to show Scott a neat place to return, we headed over to the main hall. I noticed the detail on the ceilings right away.

The rest of the hall was lined with medieval knight armour displays, which was quite interesting to study. Right around the corner, we saw a group hurrying over to the concert hall. You can hear live music played throughout the museum every Friday night! 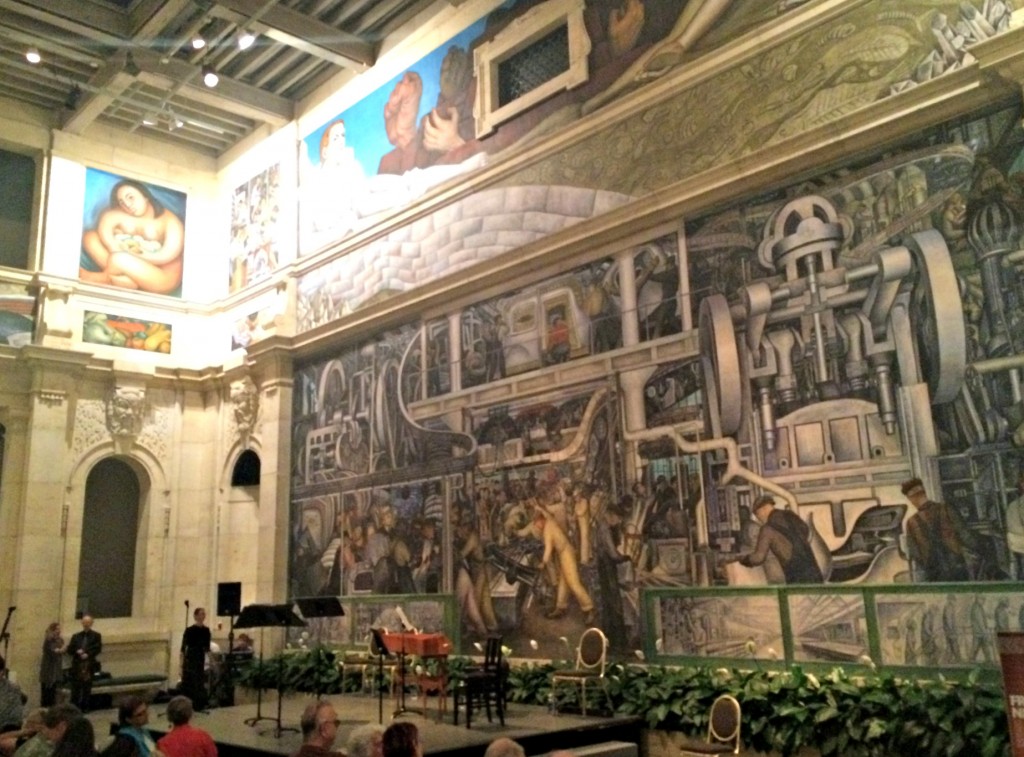 You also might notice the famous mural on the walls. This area of the museum is called Rivera Court, after the artist Diego Rivera who completed the twenty-seven panels of work in just eleven months!

The most famous piece covers both the North and South walls and is labeled “The Factory” after the manufacturing process of the automobile industry. With the home of Ford so close, it is a very well known and respected piece throughout the country!

With limited time, we weren’t able to explore the entire museum but tried to hit most of the highlights. My favorite part was seeing the originals of famous paintings casually pop up in the galleries.

And hey, check out the self-portrait of Vincent Van Gogh himself! Since it was our first visit into the art of the DIA, Scott and I kept gawking over being able to see the art we grew up learning about in our school books right here in front of us. 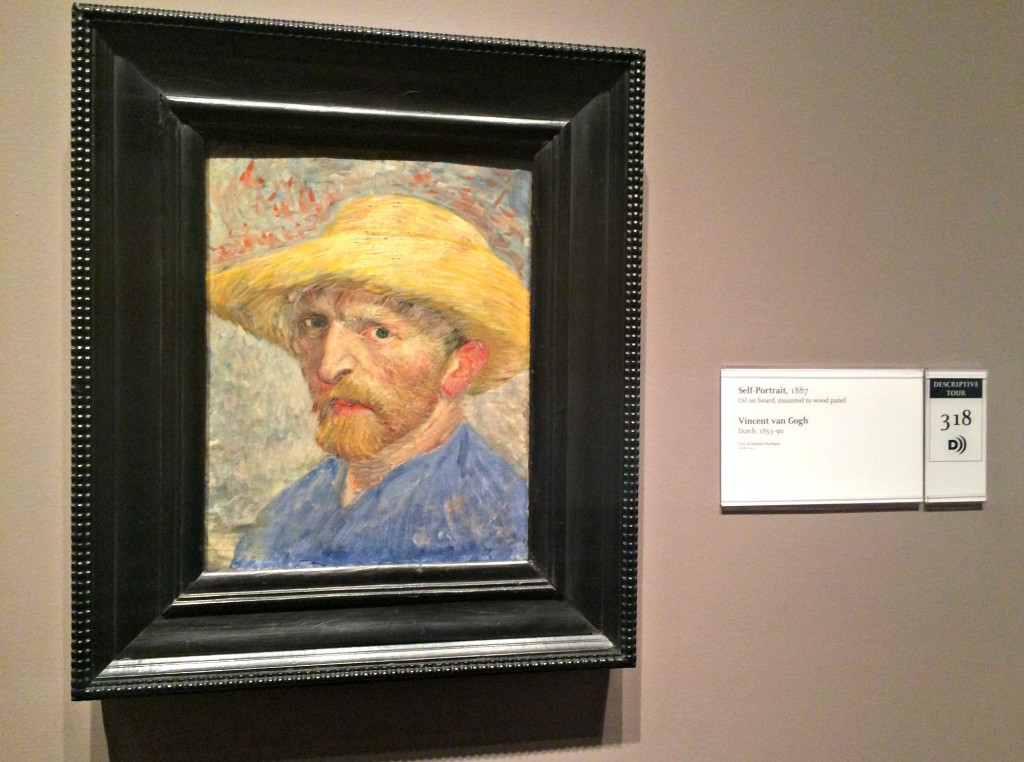 Most (if not all) of the originals are lined with a non-reflective layer of glass that was almost impossible to spot. Over and over, I leaned in as close as possible to try and spot it, and always got a little excited when I found one. That had to mean the painting was extra valuable, right?

Both Alexs’ served as our museum tour guides, since they both grew up near the area making frequent visits. We checked out early American artifacts and remakes of colonial housing.

I couldn’t get over seeing pieces from Paul Revere’s silver inventory. As in the famous “Midnight Ride” Paul Revere. 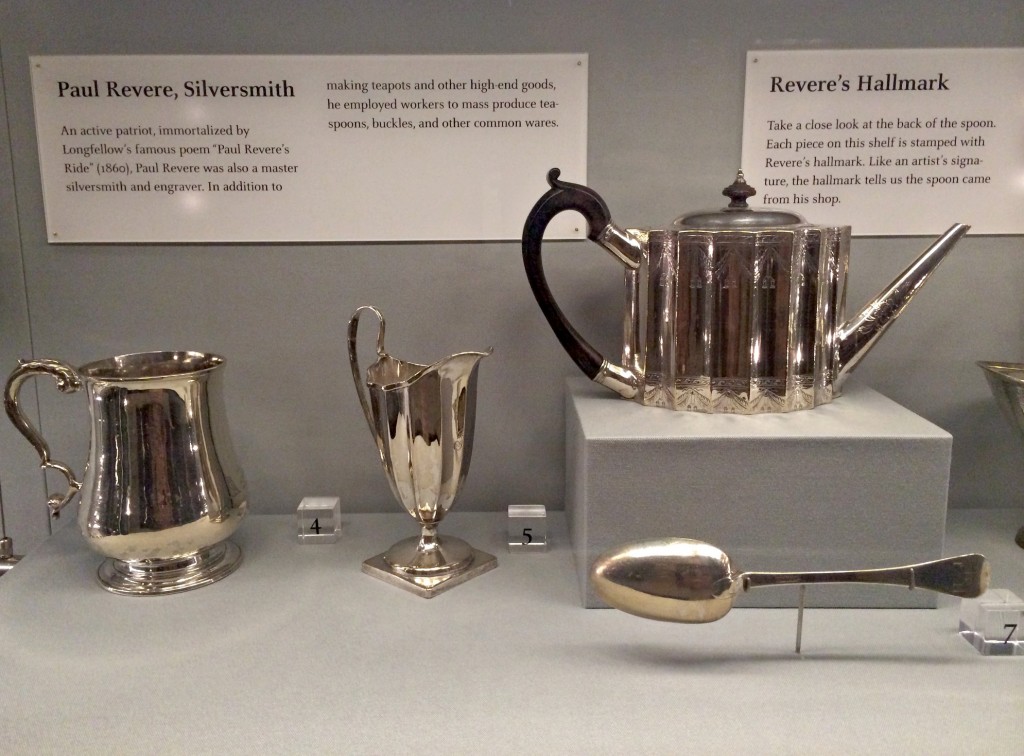 Seeing pieces stamped with “Revere” took me right back to visiting his house in Boston last year. So cool!

Slowly, we made our way through most of the wings and ended our time in the Modern room. Staying true to most modern art (in my opinion), some pieces blew my mind with creativity and some I just didn’t get.

I have a feeling this was Scott’s favorite part of the museum with all of the bright colors and abstract art.

Before we got into the next room, we came face-to-face with Andy Warhol!

That was really neat to see.

As we heard the museum would be closing on the overhead speakers, we hurried through a couple more rooms and plan to revisit again soon. 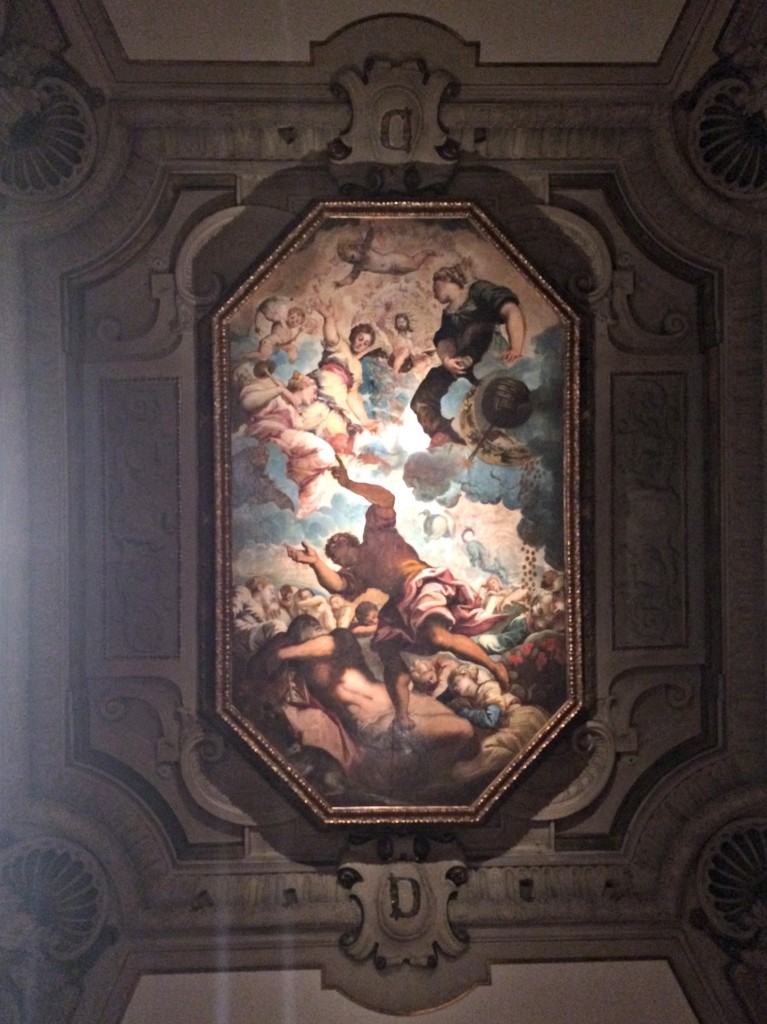 Weekend by weekend, I joke that our friends are on a mission to show us around the “good” of Detroit and help make us feel more at home. We have yet to be disappointed by anywhere they take us!

The rest of the weekend involved the regular routine of cleaning, studying and running. I start my half-marathon training today and feel great after my pre-training timed 10K distance on Saturday. 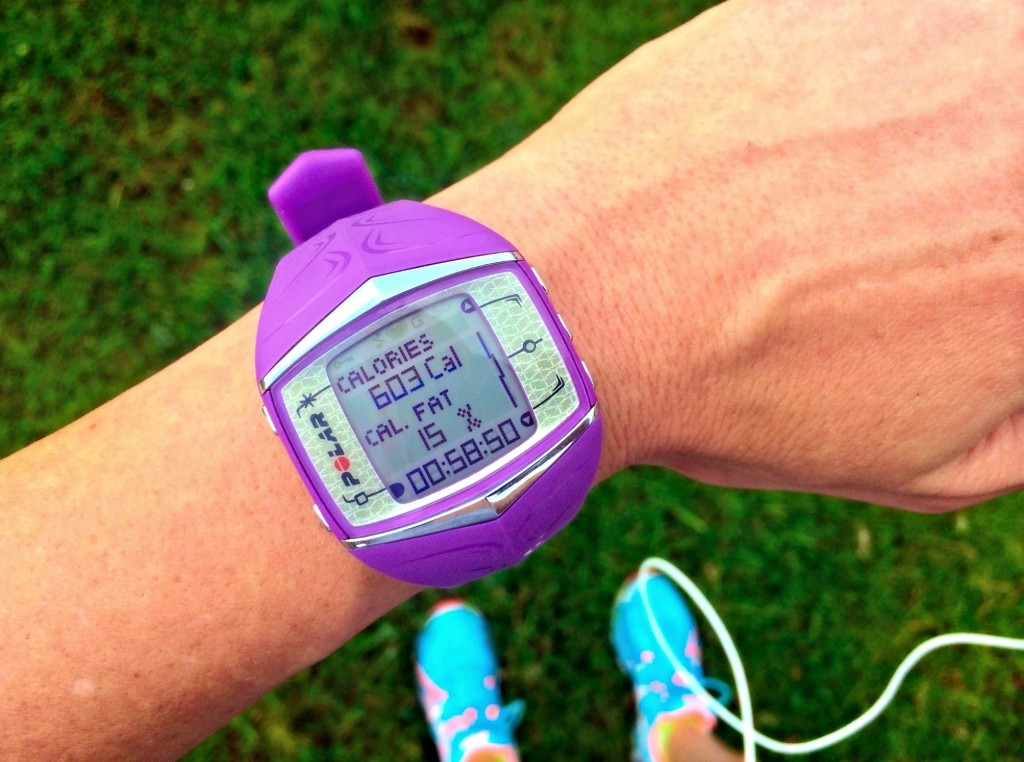 Scott and I made a return to the box office that night and saw If I Stay.

It was a great movie (actually better than I expected it to be!), but if you see it make sure to bring plenty of tissues. I was balling like a baby.

After church yesterday, I spent most of the afternoon with my main man. Roadie has been extra needy and clingy lately, so I took him for a long three mile walk followed by some play and toy time.

I think he can sense that the cooler weather is approaching and that our time on the trails won’t last forever.

For now, we have been enjoying them as much as possible! 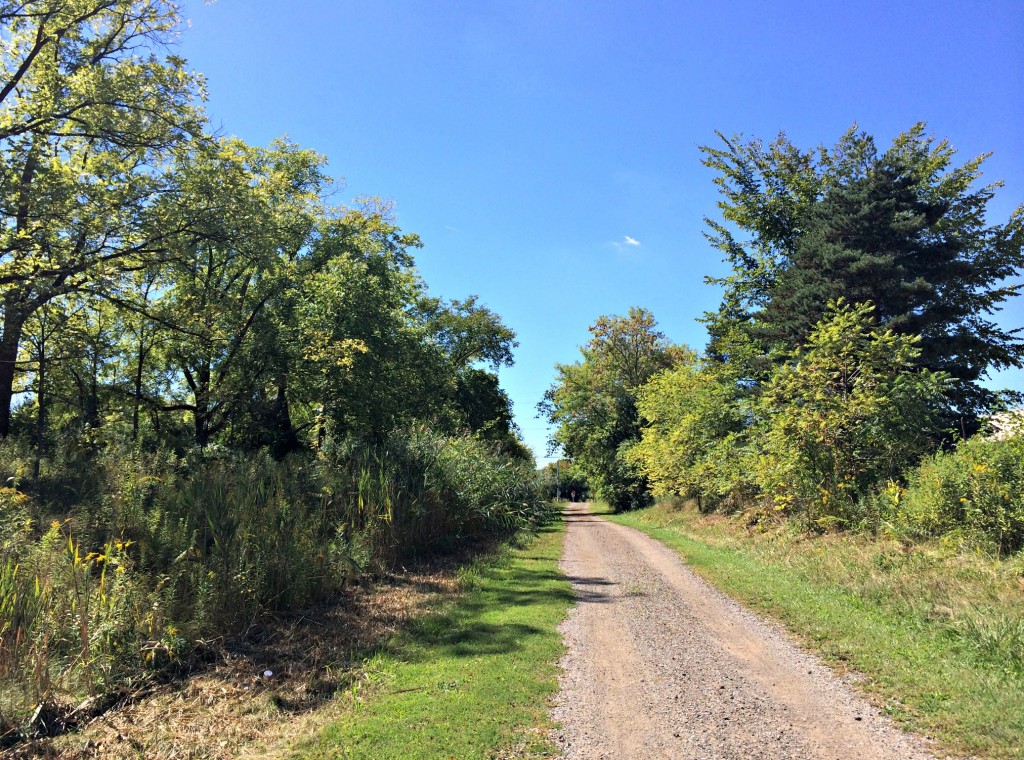 Alex is coming over later today to work on something I’m excited to share more about next weekend, but first we all plan to knock out Day One of training.  I will be sure to check in at the end of the week to let you know how it’s going.