Hello, hello! Well, today started off on a weird note… so sorry for the delay!

I actually started writing this post from Panera via Scott’s computer.

Since we are still sharing a car, I took him to work (or so I thought) and instead of pulling up to his office, we dropped the car off to get tires repaired instead. I don’t mind, but a little heads up would have been great.

Scott’s notorious for last minute surprises, so I stole his computer to chat with you all. All was good until I got kicked off of their wi-fi after my thirty minutes were up. So here we are!

Anyways, this weekend went by faster than you could say “Happy Friday!” Knowing Friday would be the only day with some down time, I took advantage of that and deemed it my weekend.

By 2 p.m., I wrapped up what I needed to do for the day and joined a friend of ours in taking Roadie to a nearby dog park.

Adam is staying with us for the month and has become close buddies with Roadie. We are very appreciative of him entertaining the pup when our weekends are busy and we aren’t around!

Even though Orion Oaks is located almost thirty minutes from us, it’s certainly worth the drive. They have a couple of huge fenced in areas for dogs to run and play around in.

Roadie gets along with other dogs great, but he tends to wander off and do his own thing most of the time. Like hiding under picnic tables. 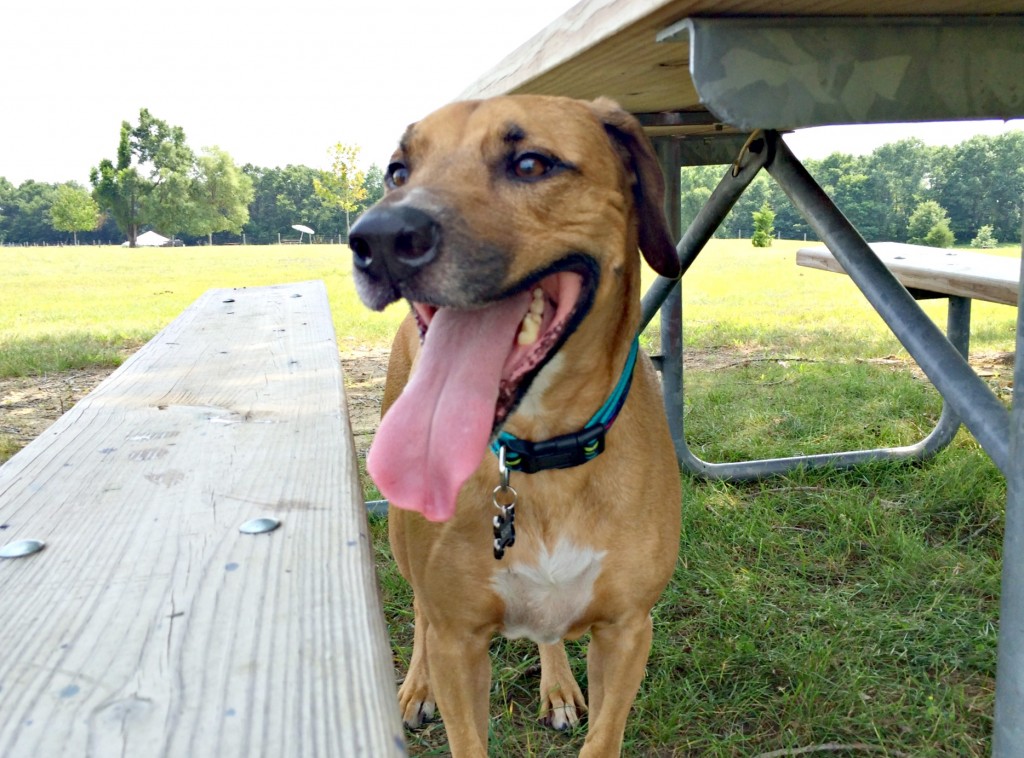 After enough play time, we took a stroll to check out the dog dock. 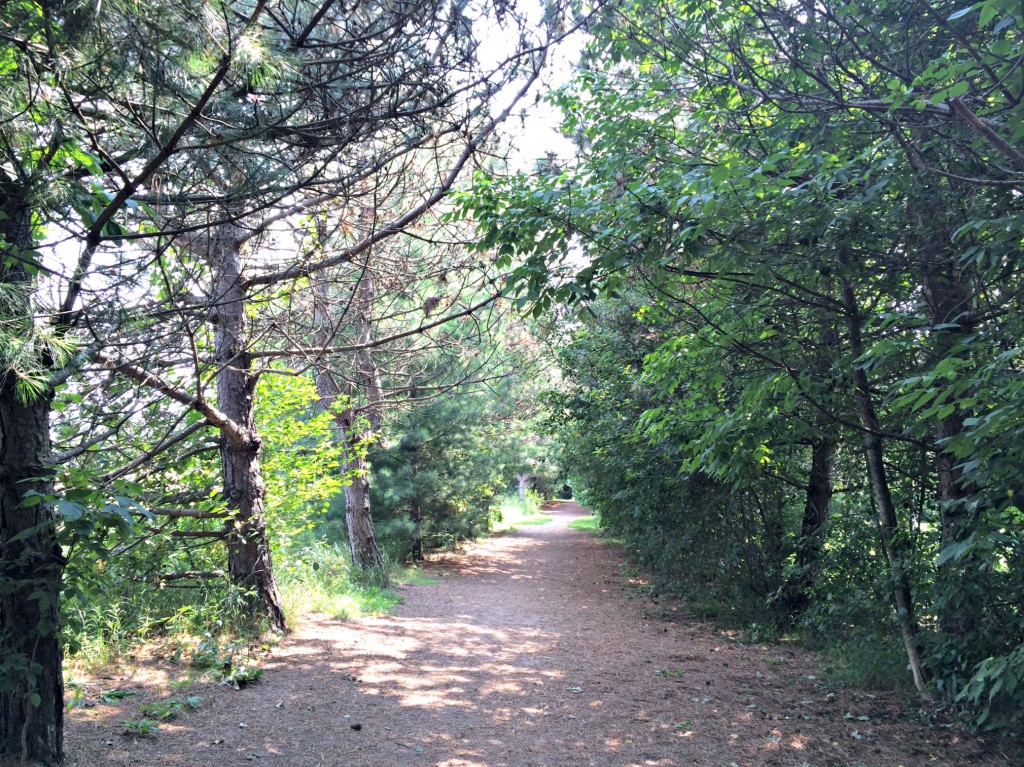 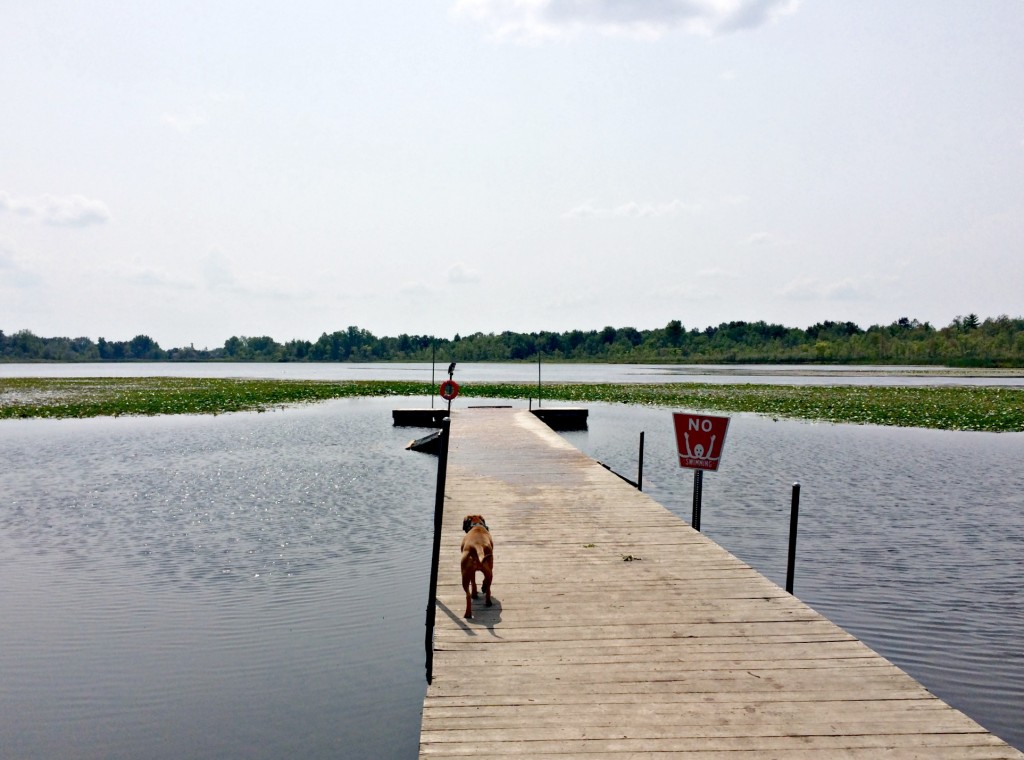 This was the first time I took Roadie near a dock, and he was just a wee bit nervous. A natural swimmer, he is not.

He will go in about up to his chest and back up to the deck before he gets any deeper. Adam took him to the dock again yesterday and said he fell in by default, so I’m kind of sad I missed that.

Swim or not, it was a great afternoon outdoors and I’m so glad we went!

On the way home, we made a stop for frozen yogurt. 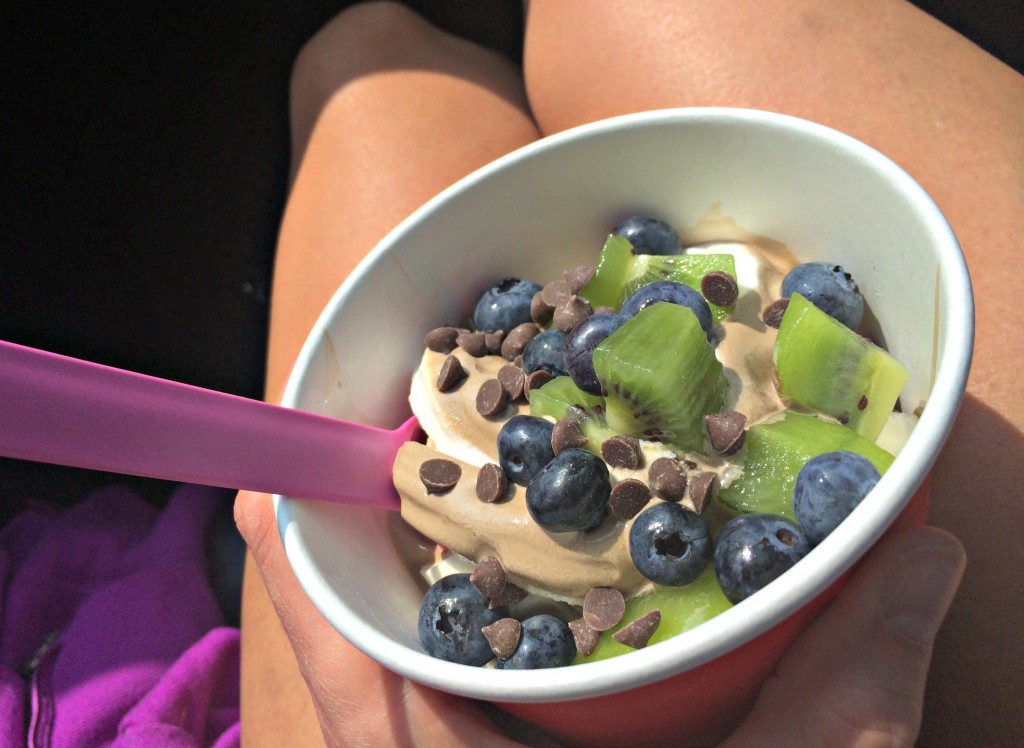 Some kind of mint cookie and coconut fro yo topped in fruit goodies and chocolate chips? Yes please.

The remainder of the weekend revolved around Pistons events, and especially with HOOPER. We started bright and early on Saturday with a 7 a.m. visit to a news station in Downtown Detroit.

We pulled up to the WDIV Channel 4 station and had a few minutes to say hello to the newscasters and staff before his segment. 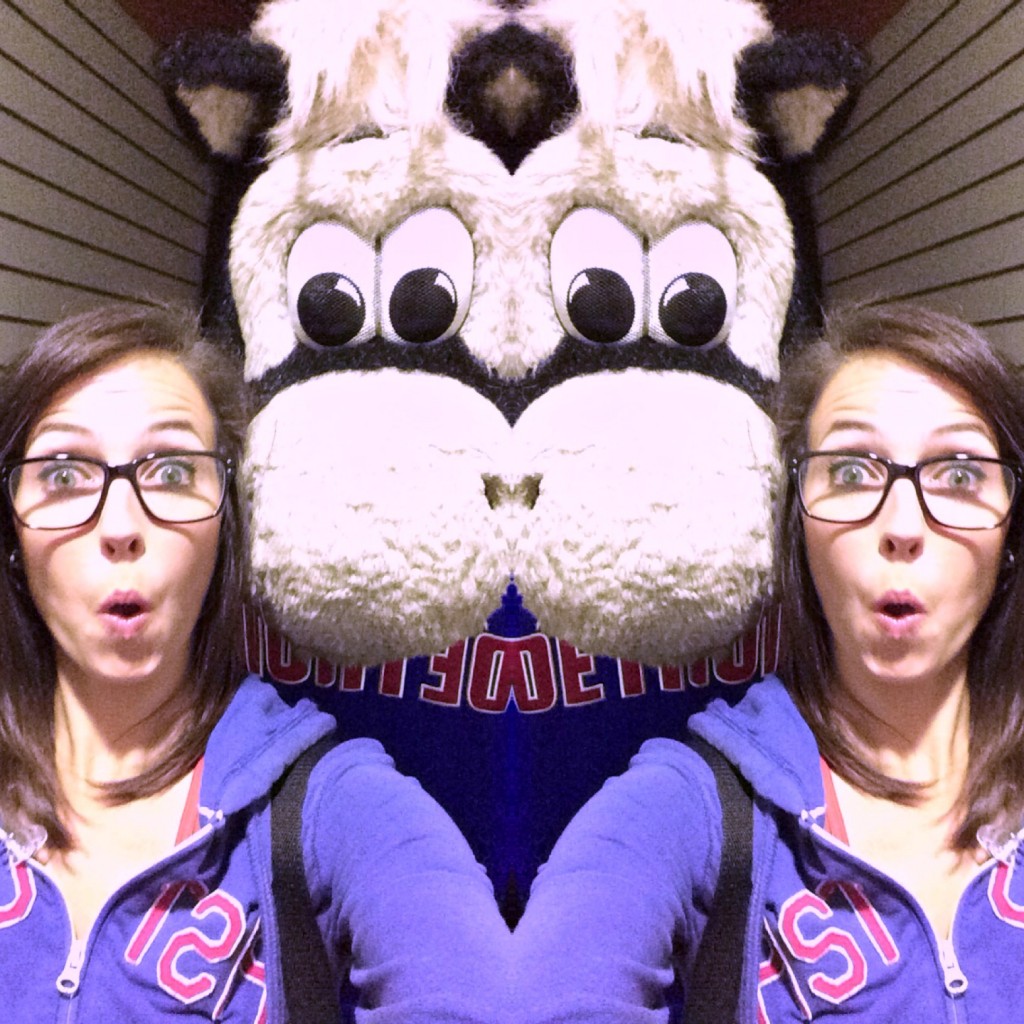 I have visited television and radio sets before, but every time I see a new one my childhood dreams of wanting to be a weather girl resurface. 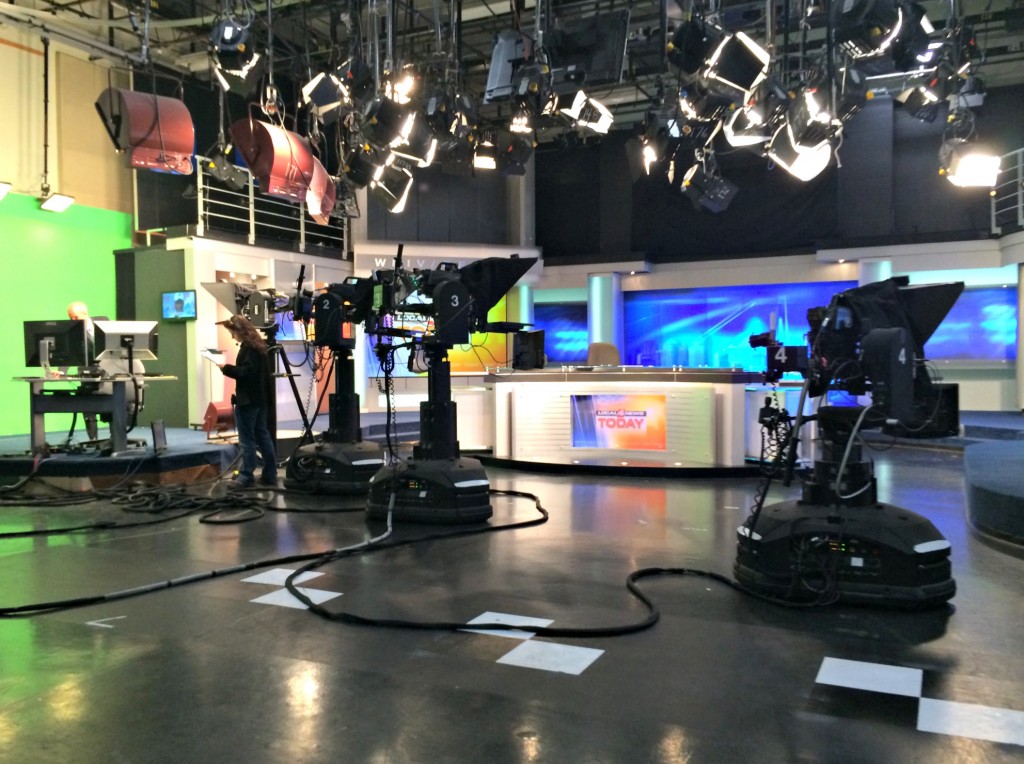 They always make it look so easy, but I know it’s a challenge not many people can do. Or do professionally and well, anyways.

While HOOPER normally causes a scene, he kept the antics to a minimum following the coverage of some serious international news. 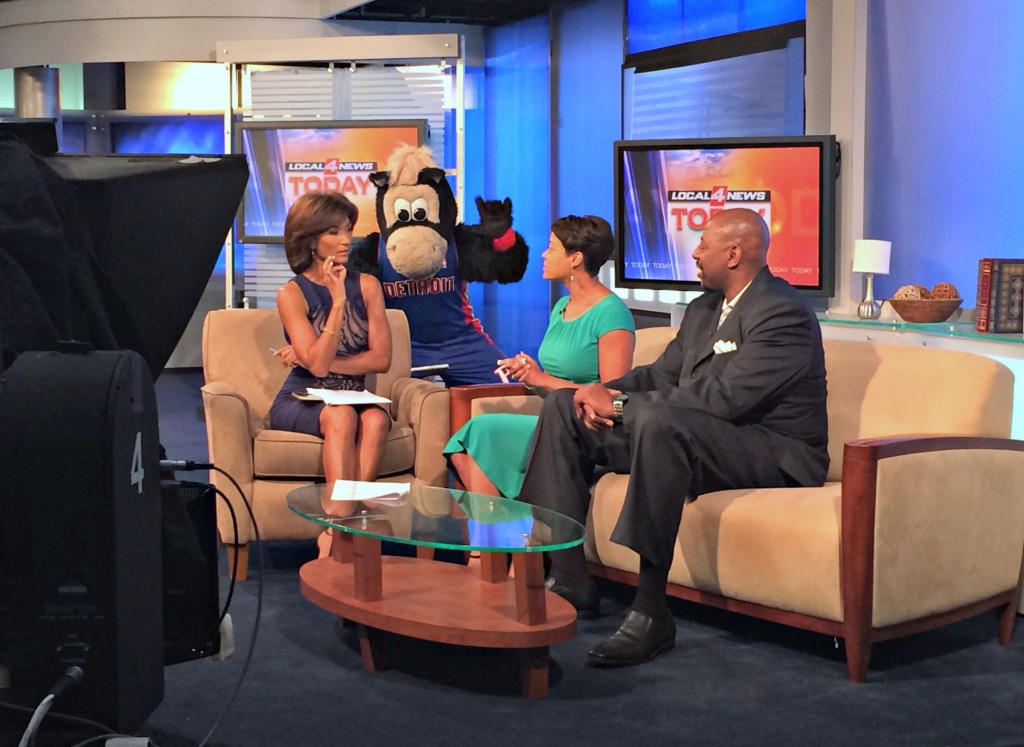 He only came out when NBA Legend Earl Cureton joined the couch to talk about an upcoming race and fundraiser called Hike from the Heart.

I really enjoyed getting to be behind the scenes and watch the live broadcast. Thanks for having us, WDIV! 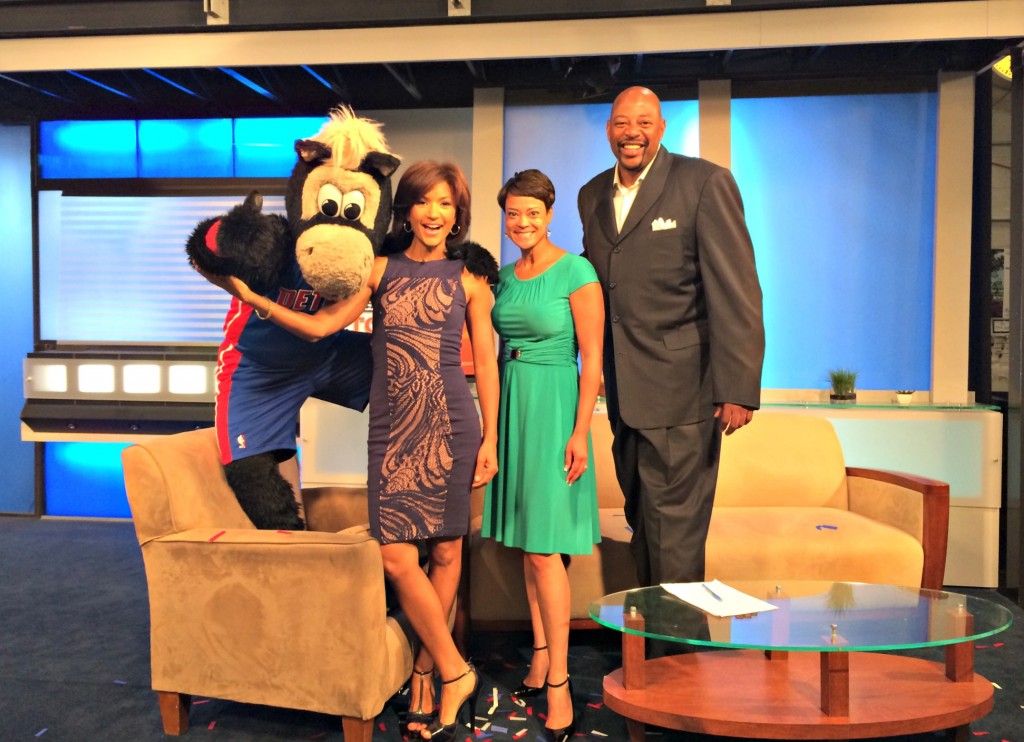 From there, we didn’t have much down time until our next event. We had a bit of a drive to get to a festival in Clarkston where HOOPER pulled out some of his most known tricks.

Dancing on his truck, spraying people with silly string, and even giving dirt bike rides to children all took place before our finale with PAWS. 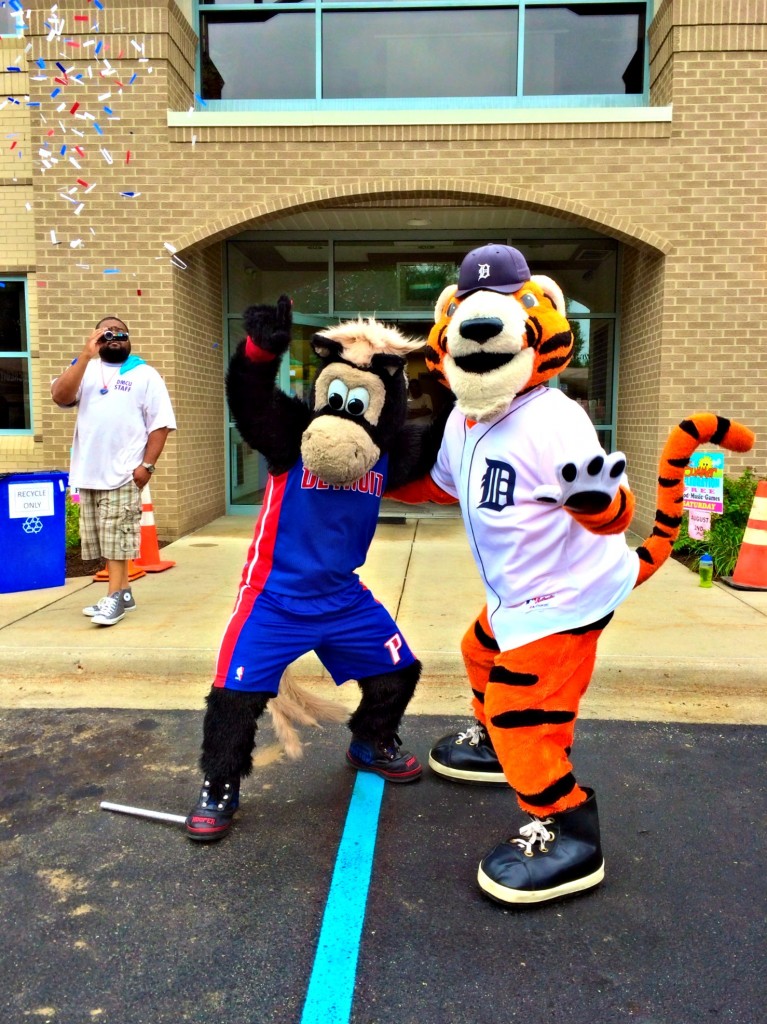 It’s always funny to see mascots interact with each other.

After that, I met Scott back at the arena and got ready to assist him in running this year’s Flight Crew auditions! I have written about the Pistons dunk team several times on the blog, and I keep doing it because I truly feel that they are one of the best in the league. 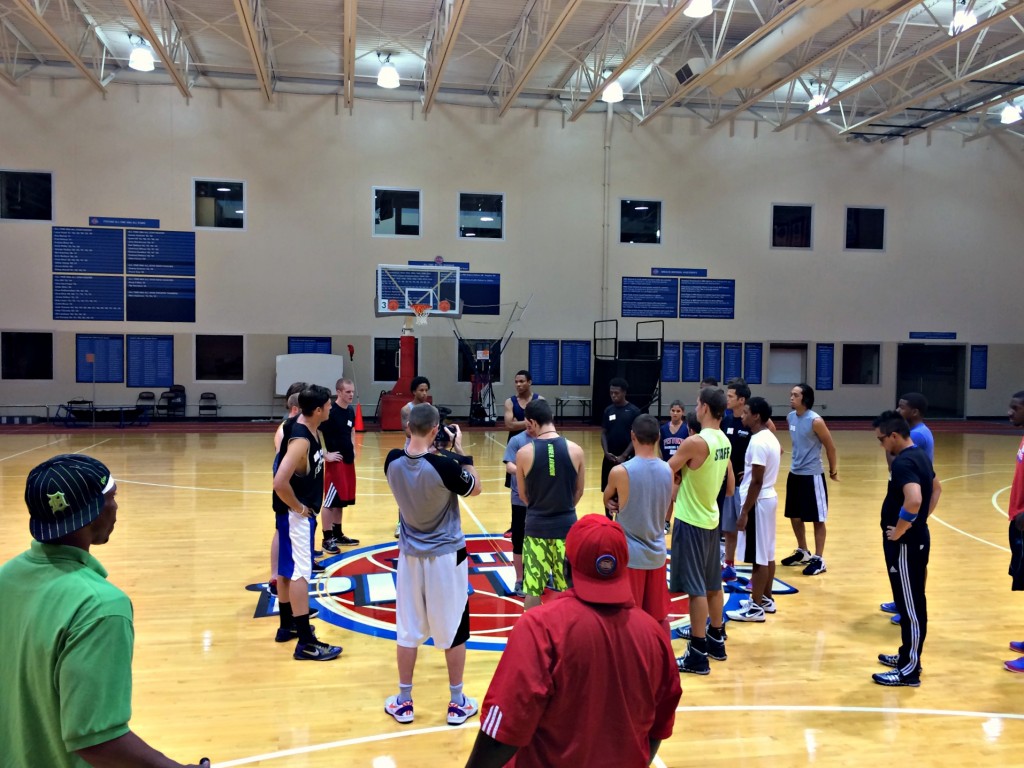 What they come up with and try, fearlessly, absolutely blows my mind and I was just as impressed as ever throughout the weekend of auditions.

We finished up for the day just before 9:30 p.m. with raging appetites, and met a few friends for dinner at Outback. Scott and I hadn’t been in years!

To kick off the party, I ordered a blackberry sangria (yum!) and had no problem helping out with the bloomin’ onion for the table.

I ordered a specialty entree for dinner of sirloin and shrimp topped in crab with a salad and sweet potato on the side.

Everything was delicious, but filling… and I’m about to dig into the leftovers!

Sunday felt like a repeat of Saturday, except exchange the morning news for a church service and the festival for a birthday party with HOOPER. Busy!

After the birthday party, I raced back over to the arena to help with the last day of Flight Crew auditions. They are currently working on putting the final team together so I can’t share too many details, but I have a feeling this year is going to be even better than previous seasons. 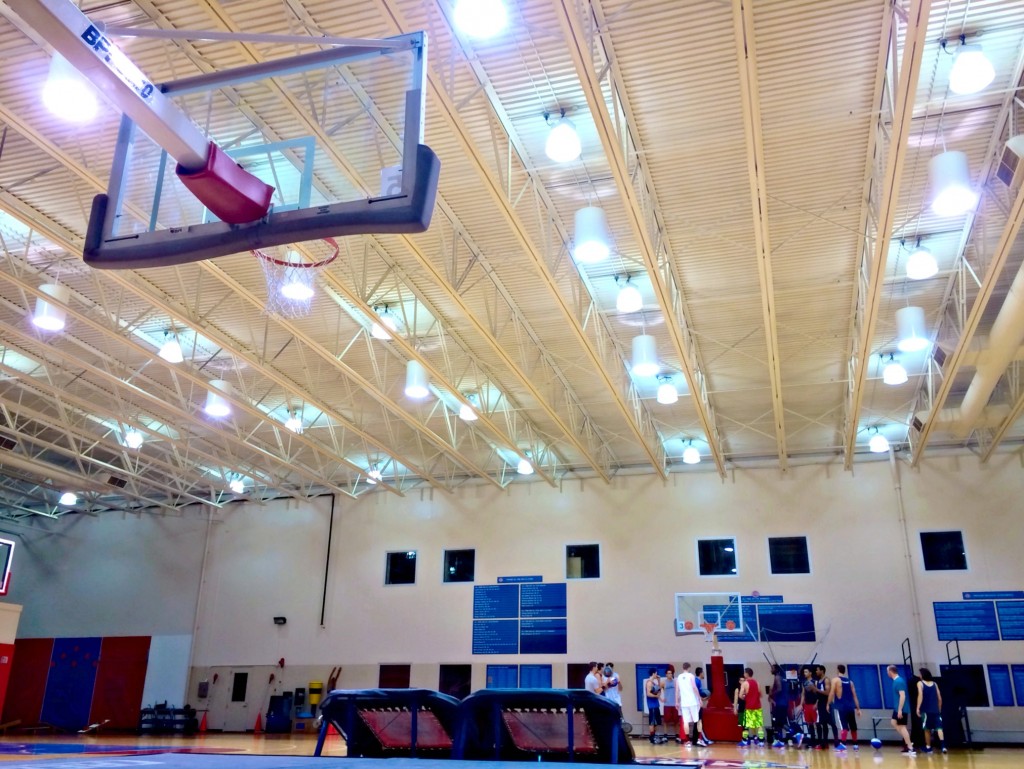 There was so much talent!

This time, Scott and I got home later and fell asleep as soon as we could. And just like that, the weekend was over. Crazy!

I woke up this morning knowing there’s plenty to do around here. I didn’t plan on spending the entire morning away from home, so I guess it’s time to get to it. I hope you all are having a great start to your week!

(Linking this recap up with Katie.)

• Have you ever visited a television or radio station? Was it what you thought it would be?

• What was one highlight of your weekend?

Like I mentioned earlier, I have had the opportunity to visit more than a few television and radio stations, mostly on appearances as a dancer. It’s always interesting and fun to see how everything works!

From the outside, it seems like the broadcasters and DJs have such a fun job, and they make it look so easy. Seeing a broadcast live, however, made it look a lot more nerve-wracking. There is no room to accidentally stutter or mess up, which is something I’m positive I would do from time to time. It’s always so cool to see the professionals do their segments, most of the time talking to air or something in the distance, flawlessly. I love it!