I remember the exact feeling I had making the team for my 2007-08 Rookie Season. I felt on top of the world and had the utmost confidence. 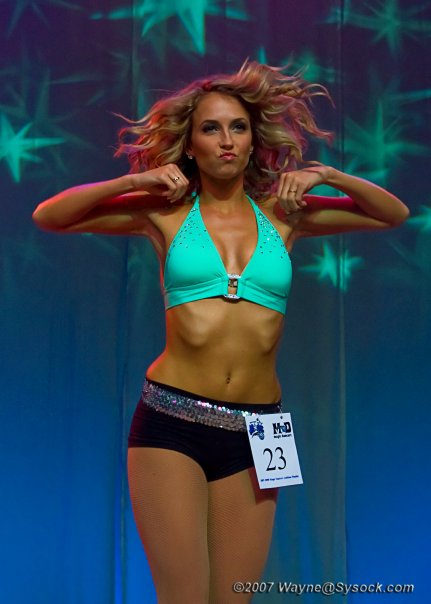 Right away, I said yes to an opportunity to travel the world and formed a close bond with a group of women I would now call my sisters. 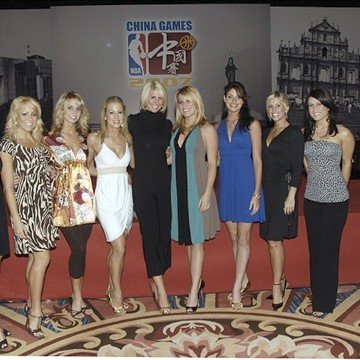 I dressed up as a zombie and performed in my own costume on Halloween! 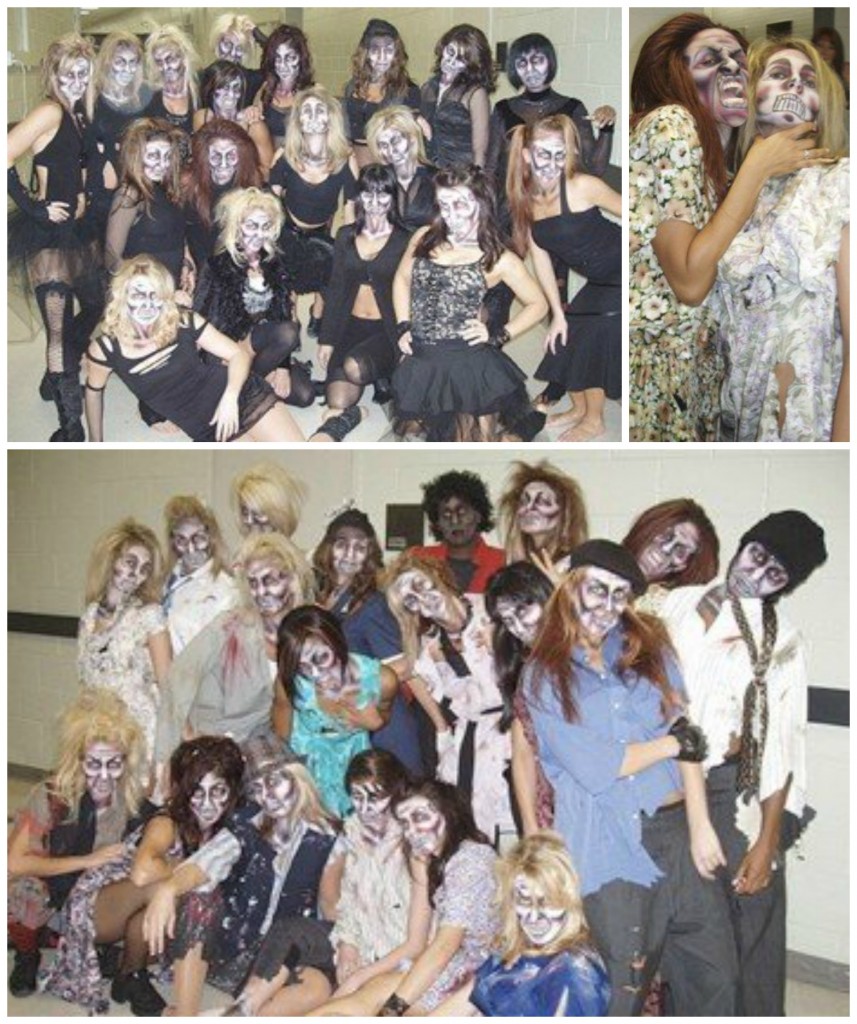 I got to belay from the ceiling during the NBA Finals (!!!) and dunk basketballs on-court and all over the globe!

I was chosen to perform overseas a handful of times including trips to China (twice!), Indonesia, and Italy! 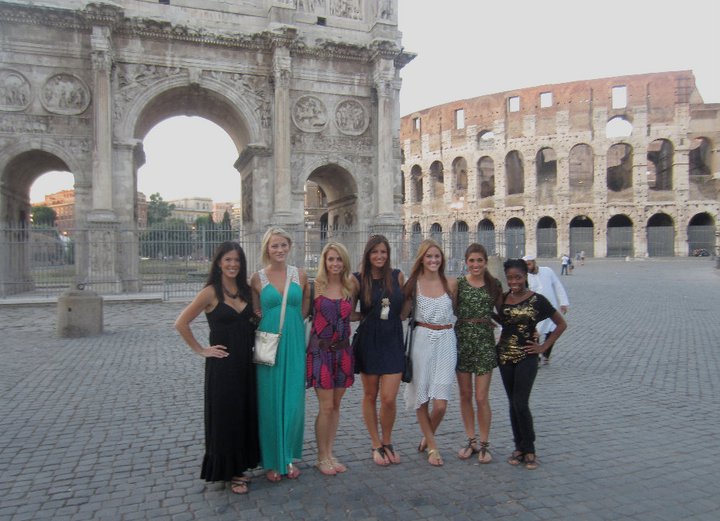 My first year was “the best.” But then again, I said that after the closing of every single season. I went into my first veteran season knowing I was in for a great year in 2008. 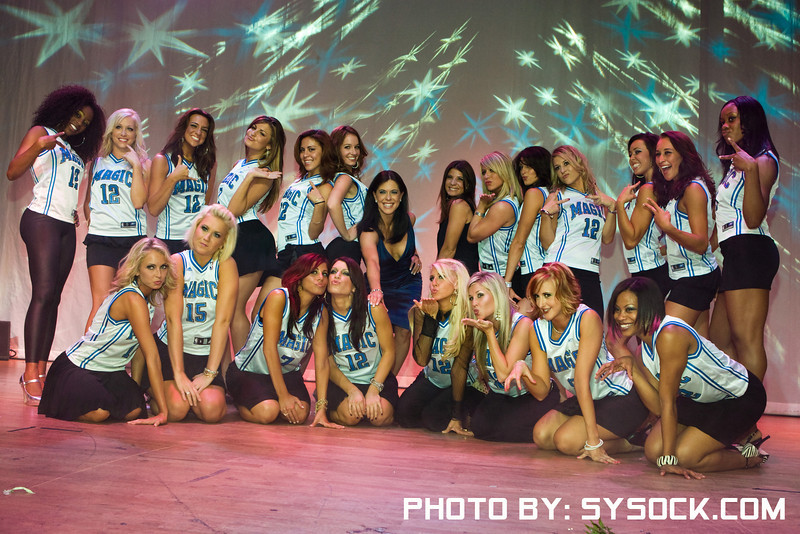 I put my heart and soul into this job, and got to dunk more basketballs and travel with the team to watch the 2009 Eastern Conference Finals in Cleveland and NBA Finals in L.A.! 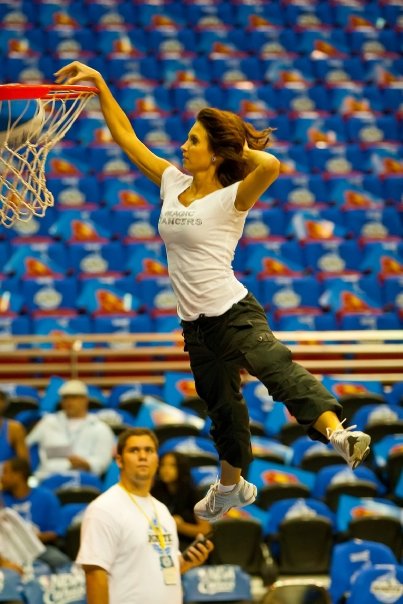 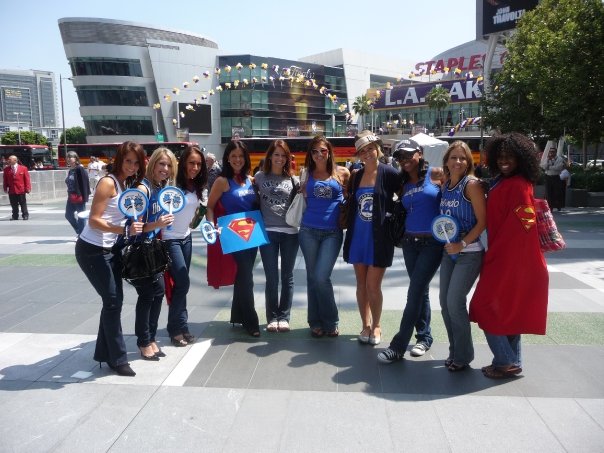 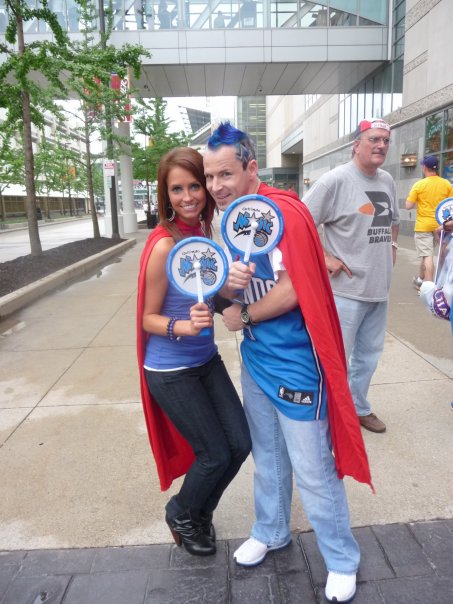 I sat on the sidelines while my dad took the court over with the 3D Dancing Dads! 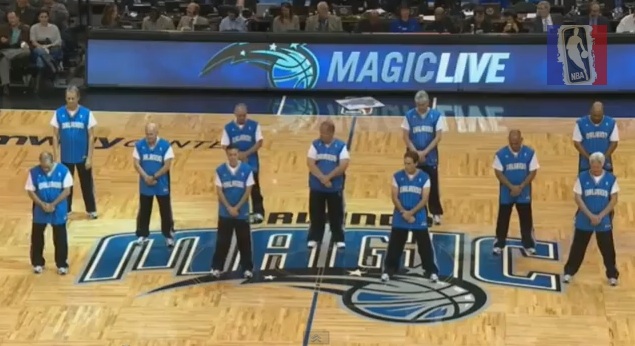 Yes, those are our “real” dads out there. The grey hair on the far right belongs to me! Check out one of their fun routines!

After searching Google for at least an hour (don’t you hate when that happens? Sucks you right in!) I found the mother load of Orlando Magic Dancer throwbacks. I remember one of our die hard Magic Fans named Jose who came to every single home game, documenting it all every time!

From intros and basketball plays to timeout routines and sidelines, he somehow captured it all. And did it very well!

While aimlessly searching, I found all of his albums for every single game, starting in 2005. Can you imagine how many photos he has gone through and edited?

I thought it was great at the time, but never realized how appreciative I would be of this super fan today. He even created Magic Dancer albums, and organized them by each game, complete with captions.

I am so, so thankful I now have a place to find the photos he so lovingly took the time to take, edit, and upload for all of those years. 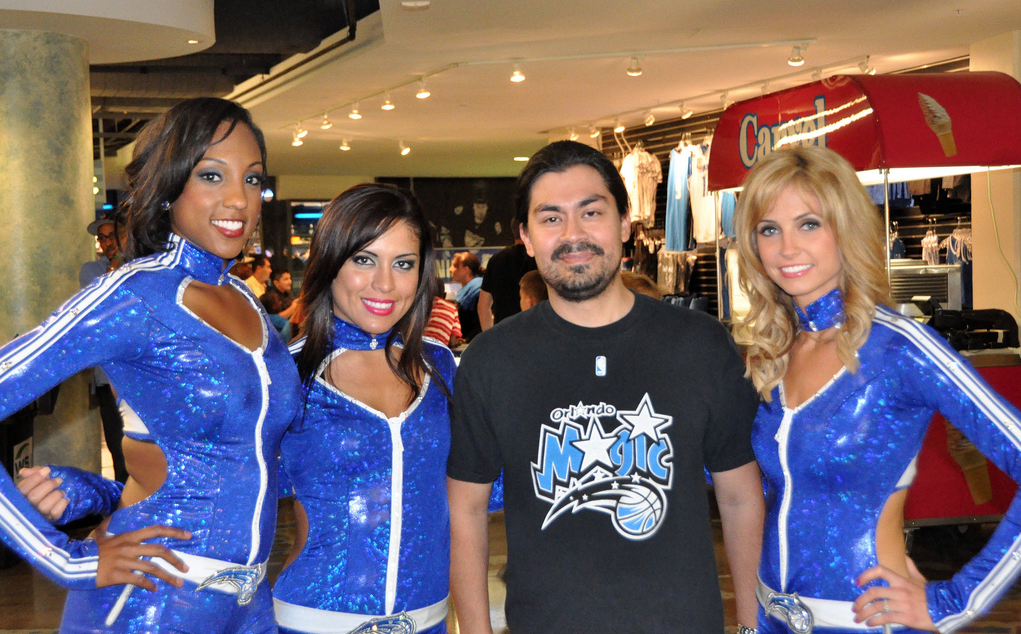 All of the following photos are from his albums. Thank you so much, Jose! 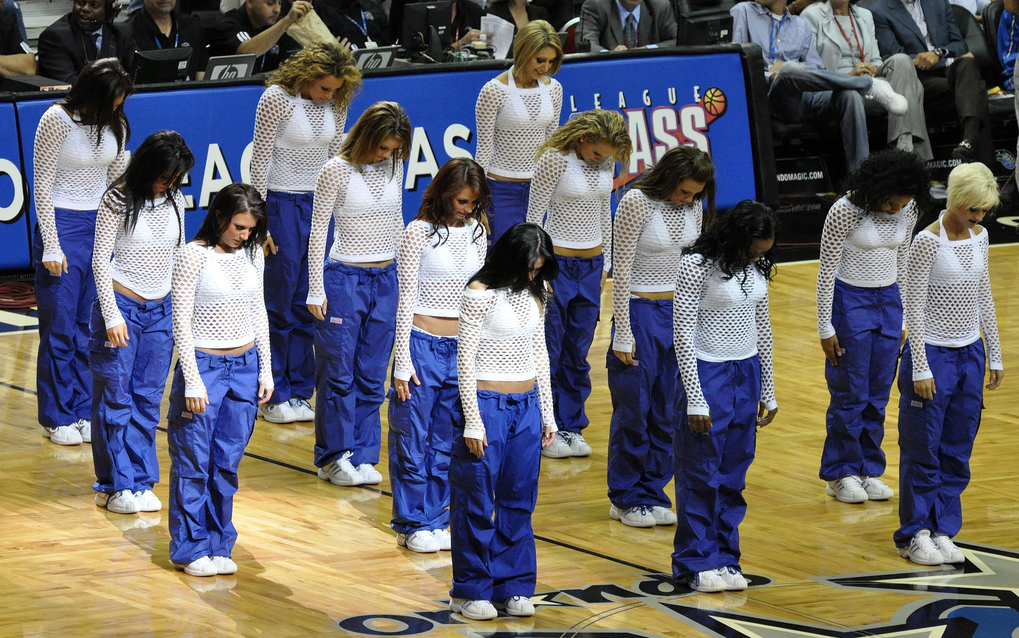 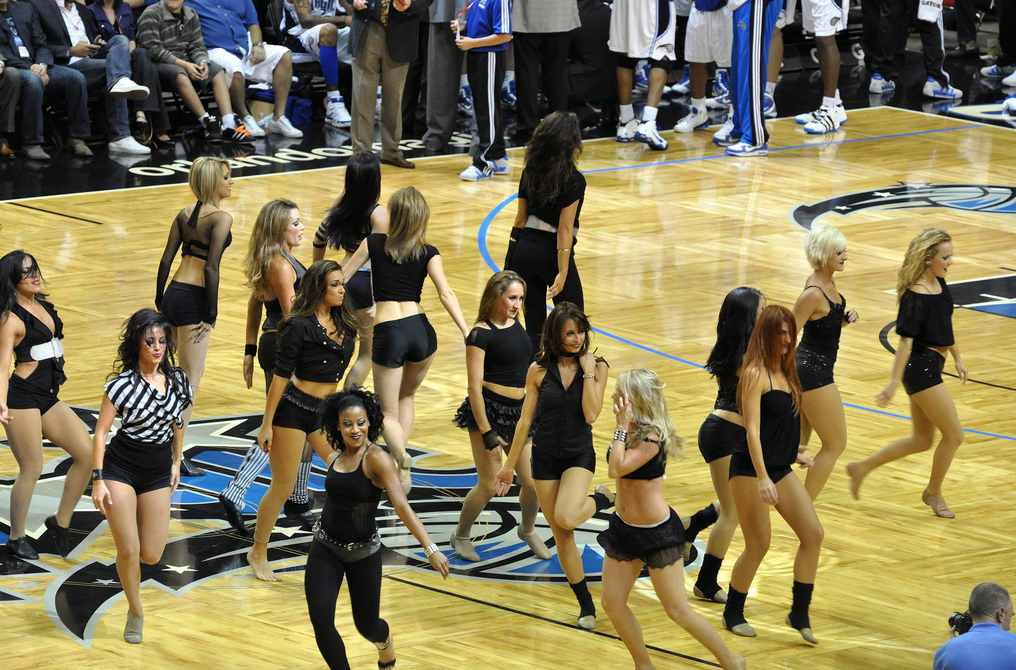 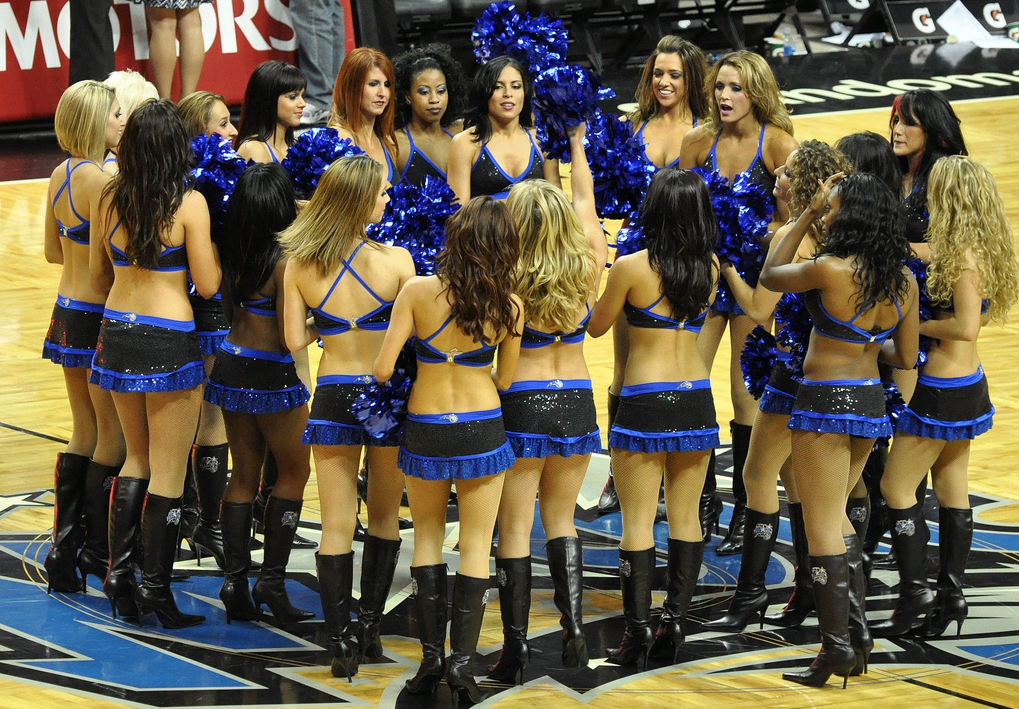 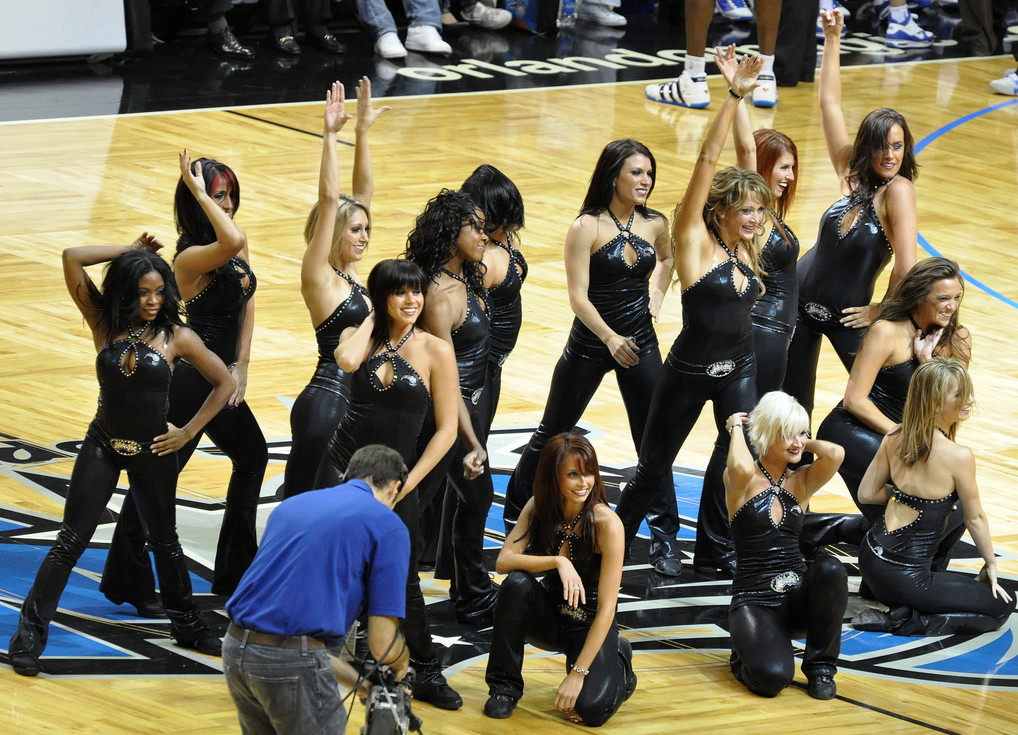 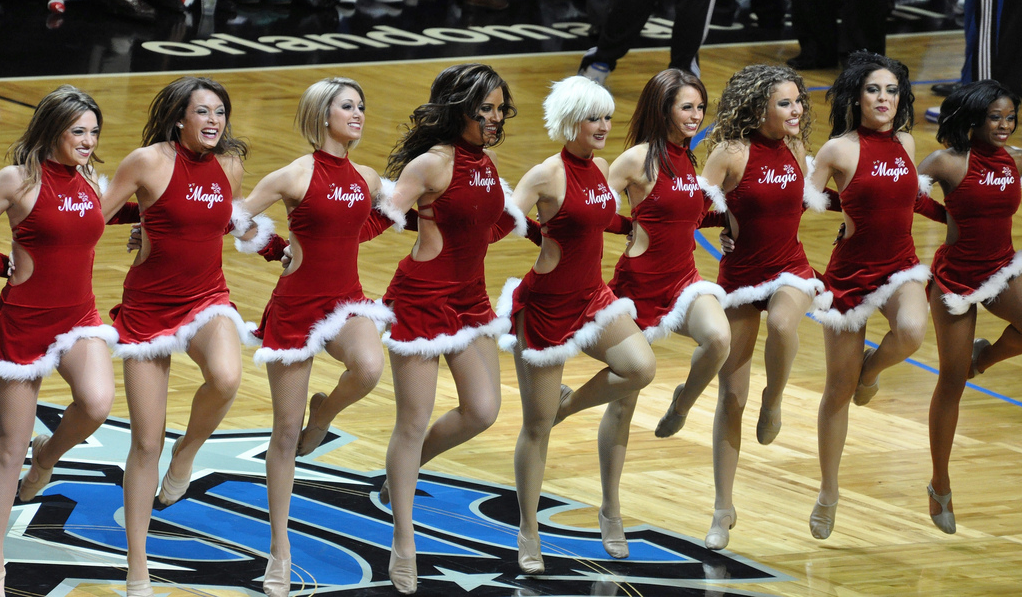 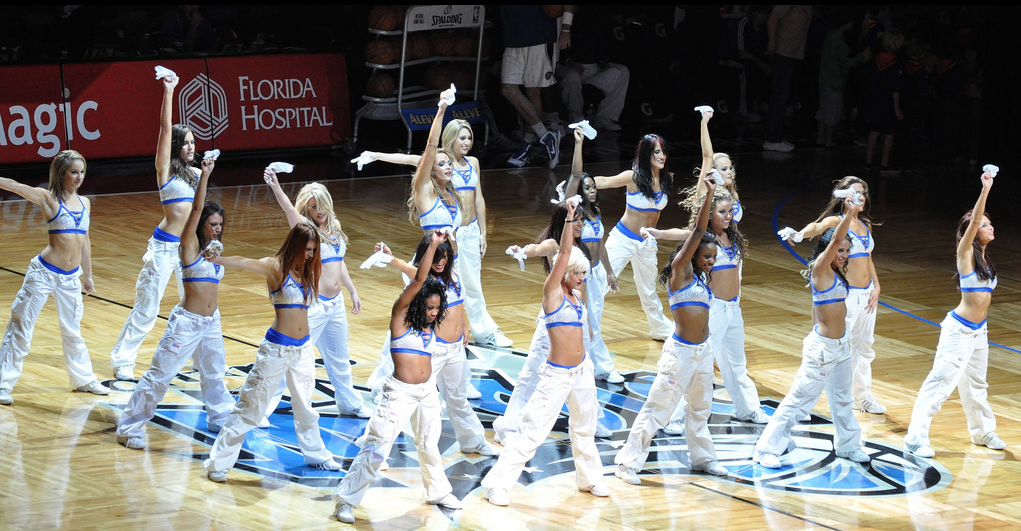 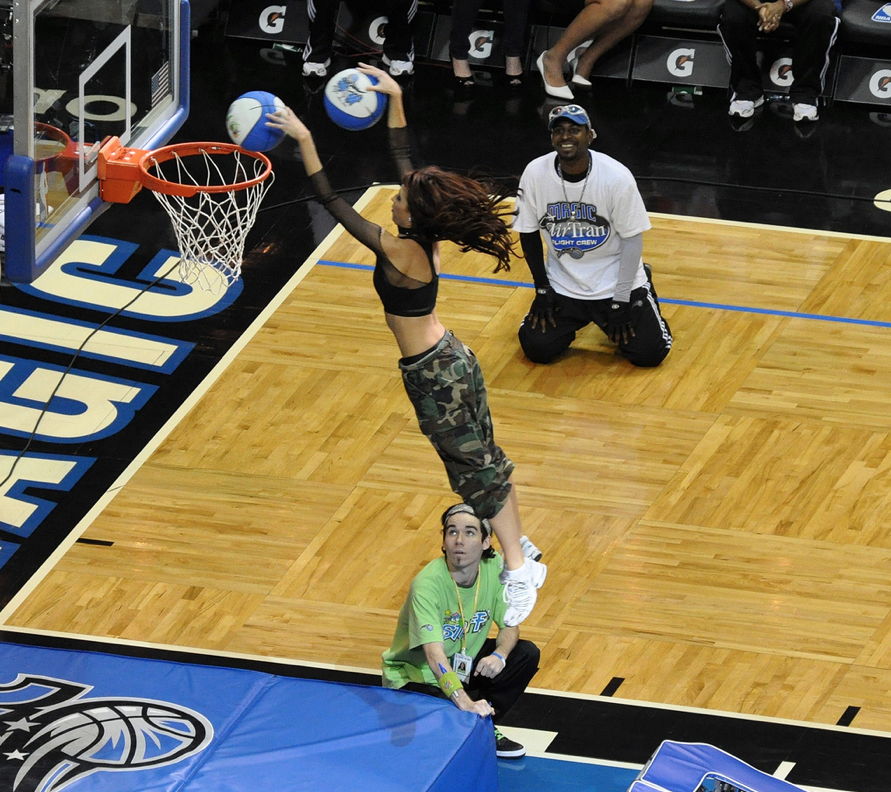 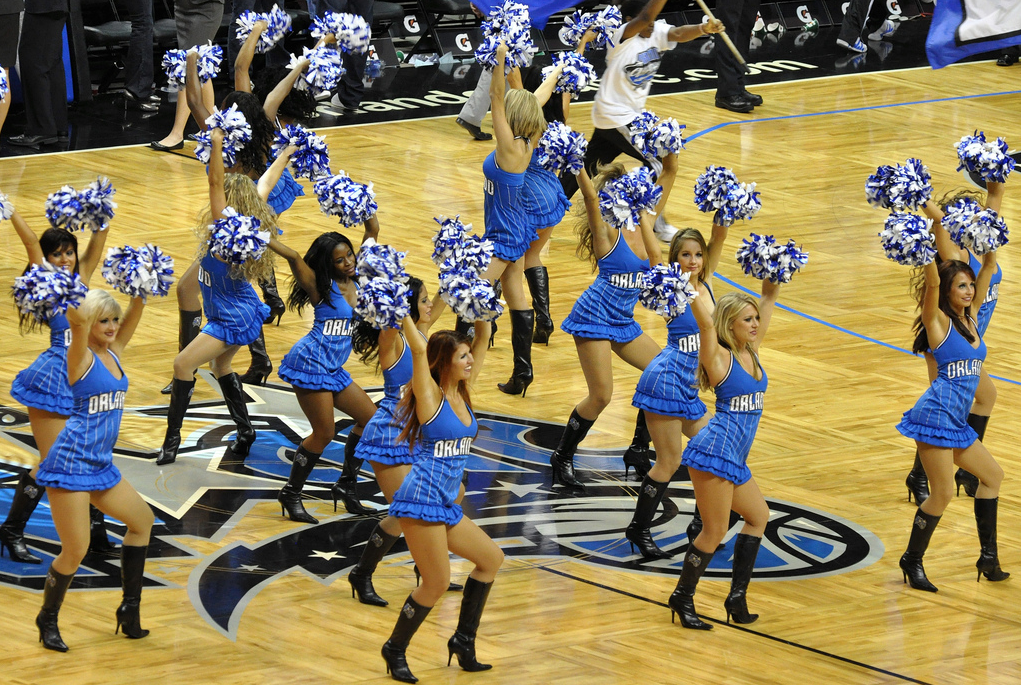 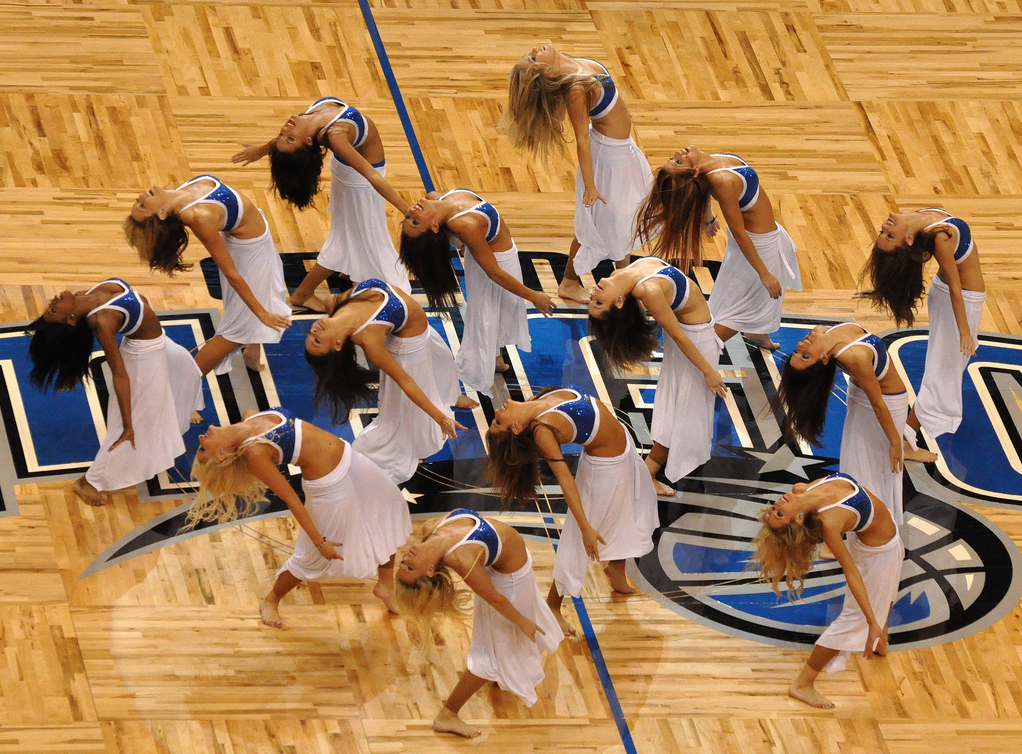 I finished my fourth season dancing for the Orlando Magic in 2011. I had every intention on trying out for one “final” season that summer, but there were other plans God had in store for Scott and I.

You all know the rest of the story. We moved up to Michigan for Scott’s job opportunity with the Detroit Pistons, and I finished my second season dancing for them in April 2014! I feel very fortunate and blessed to say I have danced in the NBA for six years and will always remember my twenties filled with these precious dancing memories. 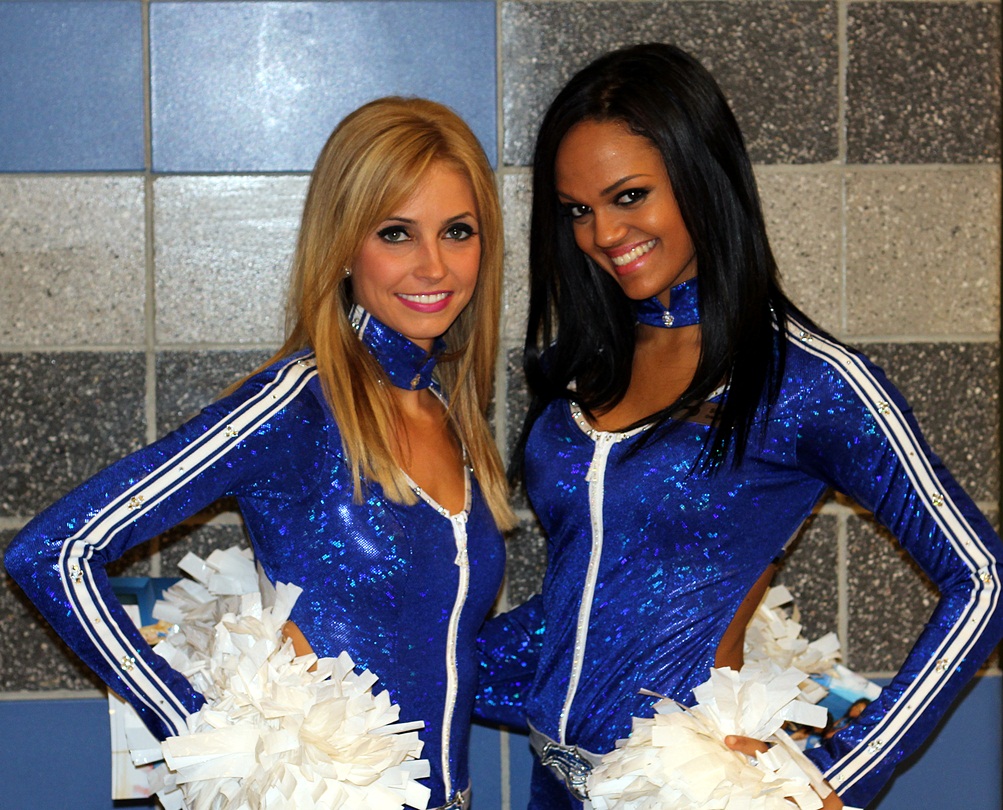 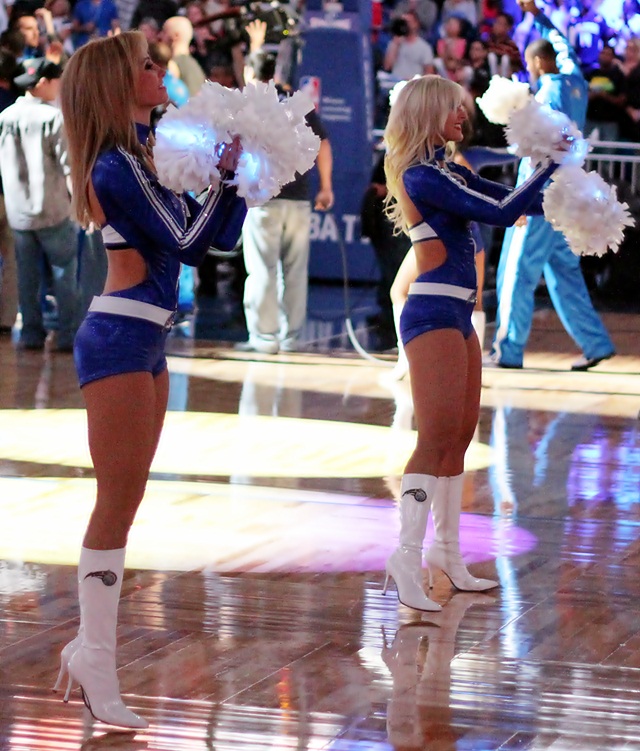 Over the course of four seasons, I met so many great women and souls I still stay connected with to this day. I went through four(ish) different hair colors and styles and felt so grateful to be able to reconnect and relive all of it as an alumni for our second Orlando Magic Dancer Reunion in February 2014. Looking at those photos still makes me smile and I can’t wait to make another trip home for the next one! • how long have you been dancing?

I have been technically trained in close to every main style of dance since the age of three. I grew up with the dance studio as my after-school care and frequently lived there on the weekends as well in my high school years. I have performed in The Nutcracker more times than I can count, but never tire of hearing that magical music.

I started dancing in sports at the University of South Florida.

After realizing I had a love for entertainment and making people smile, I tried out for the Orlando Magic Dancers in 2007 and completed four wonderful seasons. (Check out some of the highlights!) I took a little over a year off from dancing when Scott left the Magic in 2011.

We moved up to the Metro Detroit area in 2012, and I started dancing for the Detroit Pistons soon after. I finished my second season with them last April and hung up my NBA dancing boots after six years of dancing professionally in sports entertainment! Today, I still enjoy dancing for my church, taking classes, and incorporating dance movements into barre workouts.

Maintaining your fitness as part of your job (literally) can be tricky. I have to admit that I eat a bit differently now than I did when I was a dancer who needed to have abs in a two piece at all times. That said, I still never used to cut out anything from my diet entirely. I still enjoyed my desserts, pizzas, and baked goods, but definitely in moderation. That’s the key!

I never worried about my numbers on the scale or with BMI testing, and instead focused on what I looked like and how I felt in costume. If I wasn’t in the best shape I knew I could get to, I would make an extra trip to the gym that week, go for a long run on the weekend, and maybe watch the excess carbs.

I think it’s important to note, however, that I never cut out certain foods completely! My years as a dancer is when I found a love for consistently eating healthy, and I started experimenting with how to make my meals and recipes healthier. I was lucky to find a balance between it all early on, and hope you find inspiration to eat more of the rainbow too!

• do you have any audition tips?

I covered my experience auditioning for my last year on the Pistons in order to answer questions about what the experience is like. I didn’t get to finish the series, but here are the posts those of you interested in auditioning to dance for a professional sports team might find helpful:

Also, check out my audition fashion tips on Fullout.TV!

• why did you stop dancing in the NBA?

The short version? It was time to move on and start a career outside of dance. I wanted to focus more time on blogging, get back into the fitness industry, and eventually settle down to start a family.

• do you miss dancing?

Yes and no. To be honest, I don’t really miss dancing here in Detroit. Everything is just so different. I was the oldest one on the team and nothing about the style of dancing came natural to me. In Orlando, however, it was hard for me to go to a game without tearing up. Those girls were like family to me, and I still miss dancing with them on that court every day!

Overall, I am very happy with my decision to retire from dancing professionally. I don’t regret it at all. I enjoy going to the games to support Scott and am keeping plenty busy with my new job as a personal trainer.