Tuxes have been something Scott and I have been trying to get done for a looooong time.  You would think that it doesn’t take that long to go into a tux store, get the groom measured and pick out what the guys in the bridal party will be wearing for your wedding….but lo and behold here we were trying to make something simple more difficult than it has to be…for months!

After months of searching online, going into tux stores and finally making some decisions – we found the tuxes the guys will be wearing! Hallelujah. 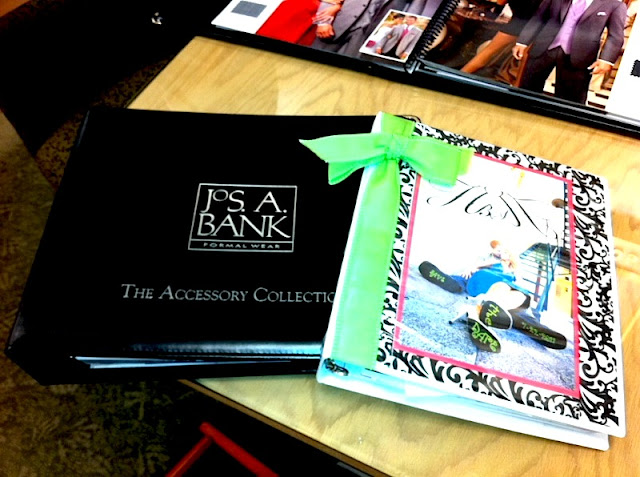 The search began a few months ago when Scott and I decided we wanted the guys to be in gray.  Although we have used some black and white in our decor, we thought the gray would be a better summery look, as well as more contemporary and casual which is what our wedding is alllll about.  So, the search began online and we searched high and low under the “contemporary gray suit” category.  You wouldn’t believe what kind of crazy stuff showed up, but finally we found a picture we both LOVED and went off of it for inspiration to dress our guys.

The first stop was Men’s Warehouse.  This is a great place to rent or buy a tux, and the service was very good, but they just didn’t have the selection we were looking for.  Bummed, Scott and I went back home to look online again at what stores would have the kind of tux we were looking for.

We loved this picture we found SO much, Scott actually contacted the photographer who took it and it turns out the wedding was from a few years back and the guys actually bought half of it from Target online and rented the rest from a tux store.  How crazy is that?!

Sounds very practical, if you ask me…I’m all about being able to find stuff for everyone that they can re-use, but at the same time that also sounds like a unnecessary headache.  Locating 9 (10 including the Groom, & 11 including the Ring Bearer) pants and jackets in the same style, all in the right sizes and altering them just didn’t sound like something we wanted to deal with…so the search continued… 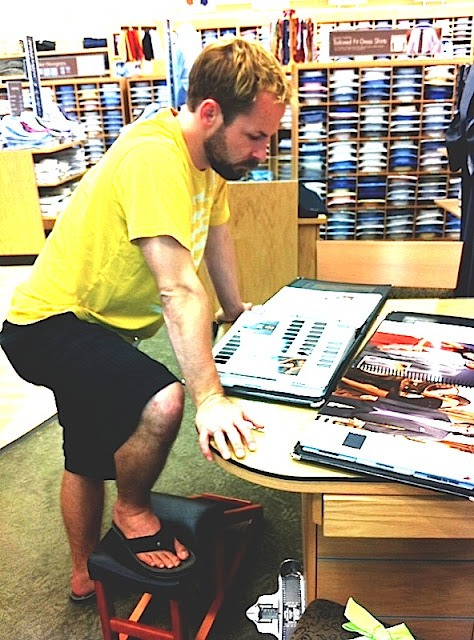 Finally, shortly after we decided to give up on the finding pieces for everyone adventure, we decided to hop back on the computer and pray to find something in a store close by similar to what we wanted.  What’s this? Jos. A BANK contemporary gray tuxes?  AHHH! HERE YOU ARE!

I can’t believe it was right in front of us the entire time!  I guess the reason I didn’t think to use this store was because my friend Britt used them for her wedding back in November, and said some of the tuxes ended up coming in in the wrong sizes and that’s just something nobody has time to deal with.  BUT, Jos A. BANK was the store that had THE TUX we were looking for….so what do you do right?  We decided to risk it, and went to the closest Jos. A BANK store next to us, which happened to be right next to the shop I got my bridal gown at – DUH. I can’t believe it was literally right under our noses this entire time, but the important thing is we found it! 🙂

Once we got there, we instantly found the tux we were looking at and signed that baby up under our names.  DONE!  Or so you might think…? Of course, Scott and I were not content with the idea of just picking out a tie from their store, and the reason for this is because they just didn’t have the color we were looking for.

Pink & Lime Green.  That color combo is not something you see everyday, especially in the shades we’re working with, and especially not at a traditional tux store!  SO….after the tux store we made a trip to the good ‘ol outlet malls.  We had already been looking at the Millenia Mall as well as online, but I just wanted to make sure there wasn’t anything we were missing out on at the outlets for design ideas, or for price.

And I am happy to report we found some great options, in fact, too many options!  Scott ended up buying one tie, but we still love 2 others from the same store and it’s going to take trying to find enough of these guys online to make the decision for us of which one to go with.  But…I think I’ve given you enough details and Scott s probably going to say I’ve given away TOO many…so I’ll just leave the rest up to your imaginations!

So there you have it – the saga of finding our perfect tuxes!  It seemed to be a long, kind of confusing, and somewhat frustrating road, but we HAVE THEM!  And I have to say, seeing Scott try a similar jacket on to what we picked instantly gave me goosebumps.  I pictured what it would be like to see him in THE tux on THE wedding day, and I got a little teary eyed.  I really, really, really can’t wait.

Now if we could just get him to shave that beard!!! 😉