It’s that time of year where we celebrate yet another year going by, and in this case, celebrating the birthday of my wonderful fiance!

This year, our birthday gifts to each other (well, Birthday, Christmas, Anniversary, AND Valentines Day gifts combined) are wedding bands! 😉 With the wedding being only 8 short months away – HOLY MOLY!!!! – we have to start being smart with where we chose to spend our money!  This year for Mr. Hess’s birthday we had a Magic home game (same as last year), so I had to get creative with how I could spoil him from when we woke up, up until about 2pm…
Before he woke up, I wanted to surprise him with a birthday suprise in the living room – wouldn’t top last year’s set up – but, still impressive I thought! When we got home late Tuesday night, here is what he found waiting for him: 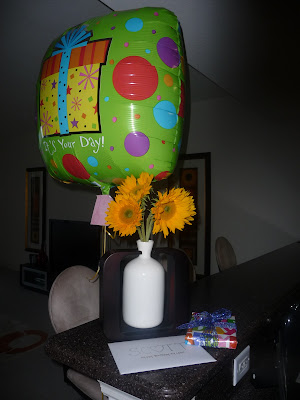 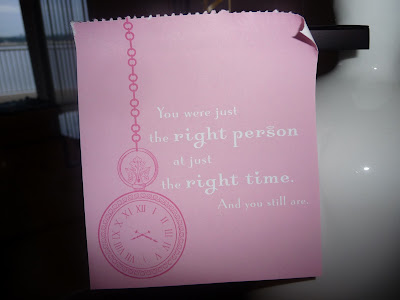 He was truly surprised, and went to bed feeling loved…but he should have known better that I had more in store since we weren’t really getting each other “gifts” this year for birthdays…

The next day was his actual birthday.  I can’t think of any better way to wake up than breakfast in bed, can you?! Originally, I wanted to take him out to breakfast, but I figured this would be better, and give me a chance to brush up on my skills in the kitchen.  So, I woke up about 8:30am, started a pot of coffee (clearly for me), and started cracking some eggs.  The day before I made a special trip to the grocery store to pick up real eggs and real bacon, since all we have here is egg whites and turkey products….I was hoping he would realize the difference, and also that I was trying to treat him as much as possible! 🙂

Since we both had to work later that afternoon, I only had a few hours to spend with him on his day. So, I figured what better way to relax than with massages? Again, saving money this year – I thought I was very clever to use the already paid for massages we had saved up…

It was good to get away from how much was going on this week for at least an hour!

Now, it was off to work – but the celebrating didn’t stop there.  One of the girls on my team made him the cutest little cupcakes!  So we celebrated with our amazing singing skills (we really should all just stick to dancing), sang him Happy Birthday, and cut the cake I made him!

After the game, we went out to dinner, and a great group of friends showed up! It was so nice to kick back and celebrate the day with my buddy! I always love to celebrate birthdays, because we get to spoil the ones we love.  It didn’t hurt that there was also some yummy goodies involved, either.
HAPPY BIRTHDAY, MY LOVE!!!!
–Presh