Our weekend was a busy one, but I’m so glad we were able to catch up with several friends!

After work on Friday, Scott and I went to the movies. He made dinner while I was working (ahhh, the best), and we were on our way to see Straight Outta Compton as soon as I finished cleaning up. I have to admit that I wasn’t excited about seeing the film, but I rolled with it since it was Scott’s turn to pick one and figured it was also an excuse to eat endless amounts of seasoned popcorn. #worthit

As it turns out, the movie was really, really good. It was interesting to learn the history behind the lives of the rap stars and see what their journey into stardom was really like. There was a lot of swearing (which was to be expected), but I really enjoyed it. I think anyone who has a remote interest in the revolution of hip hop or the group members of NWA would too!

Saturday started early for me since I left the house shortly after 7 a.m. My friend Meggan (I met back in college!) traveled up to Kalamazoo for work, so I agreed to pick her up across the state and bring her back to our area in order to spend a full day with her before she flew home. I hadn’t seen her since our last trip to Orlando, so some quality time was much needed.

I picked her up, we drove back to the Rochester Hills area, and then Scott joined us to explore our city for the rest of the day.

A Return to Yates Cider Mill

Yates is now open for the season!

Fall is quickly approaching, and there has definitely been a chill in the air to prove it. As much as I love the summer weather, I have to say that fall steals my heart year after year while living in Michigan. There is a part of me that is excited for fall to arrive and to see the autumn hues. 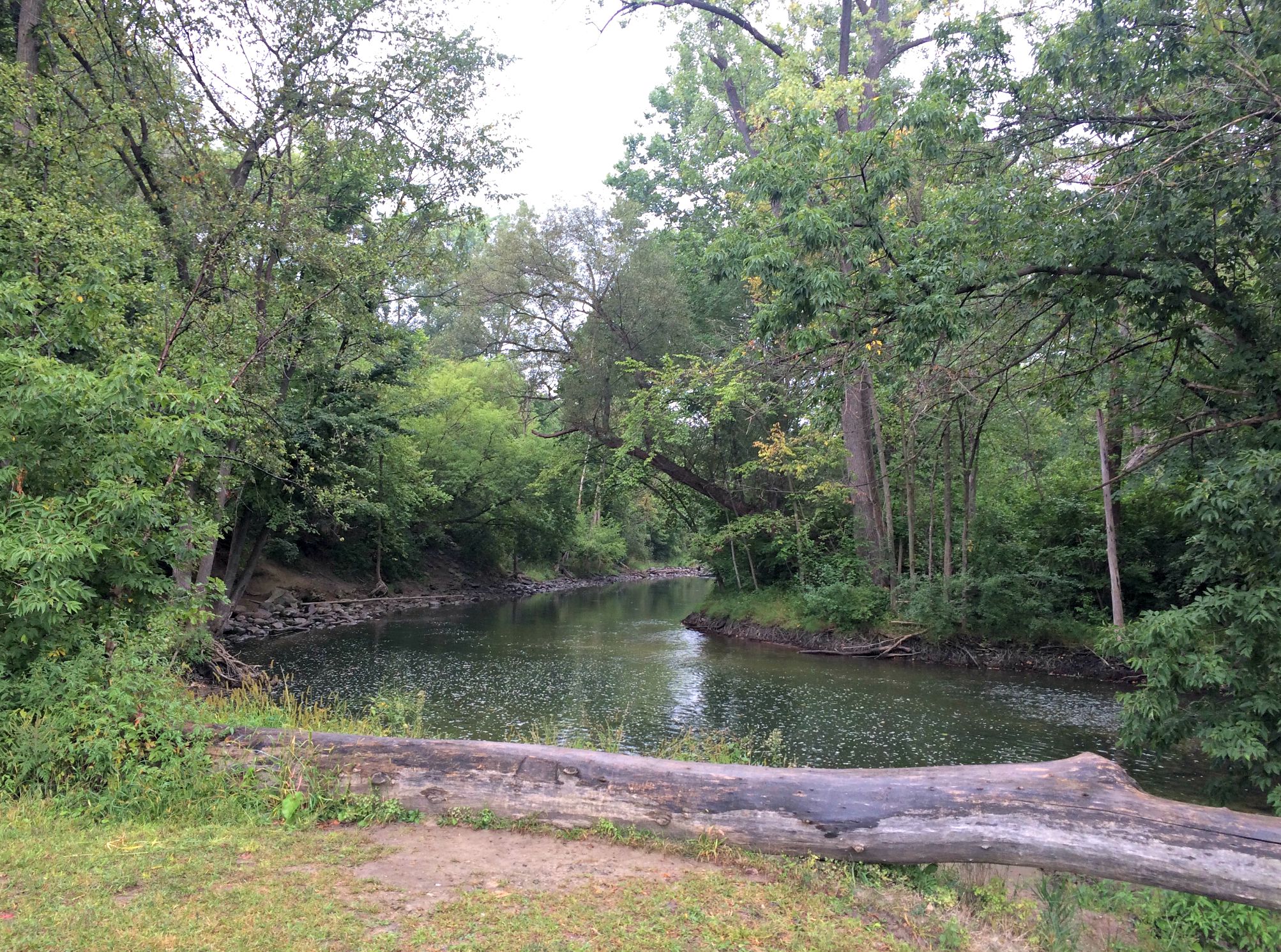 As soon as we got back in the area, we remained in comfy clothes and took Meggan to experience her first cider mill. Apparently everyone had the same idea we did because the line into the mill was the longest we had ever seen! 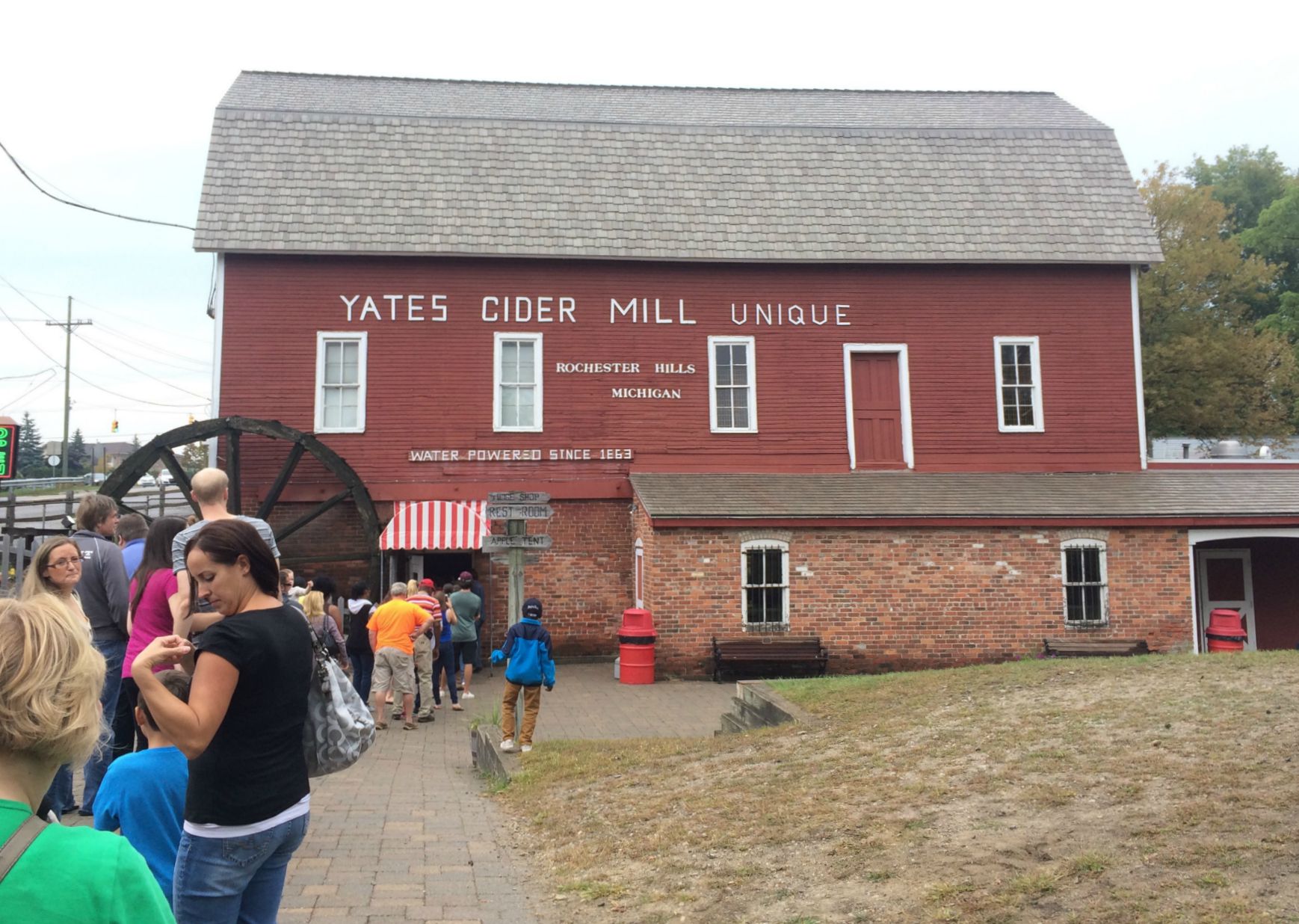 We might have considered leaving and coming back another day, but I didn’t want to do that with our out-of-town guest joining us. Luckily, the line went by relatively quickly, and we even got to sneak a peek at the apple pressing process while inside. 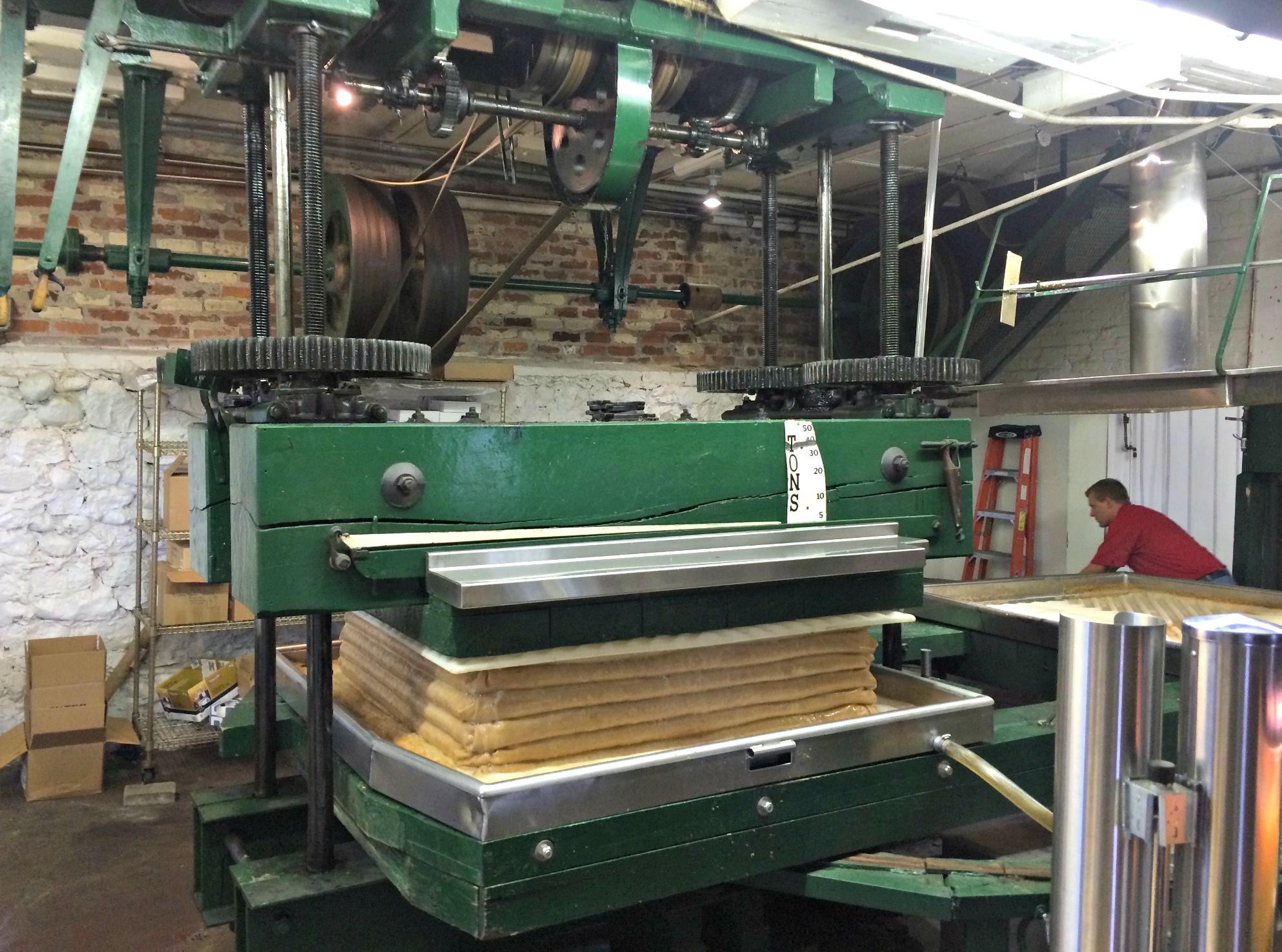 There’s really nothing like fresh pressed apple cider (hot or cold) and donuts. The three of us split a half dozen and took our ciders outside. We didn’t last long, thanks to a few bees that insisted on stalking us, but we did stop to say hello to the goats before heading out. 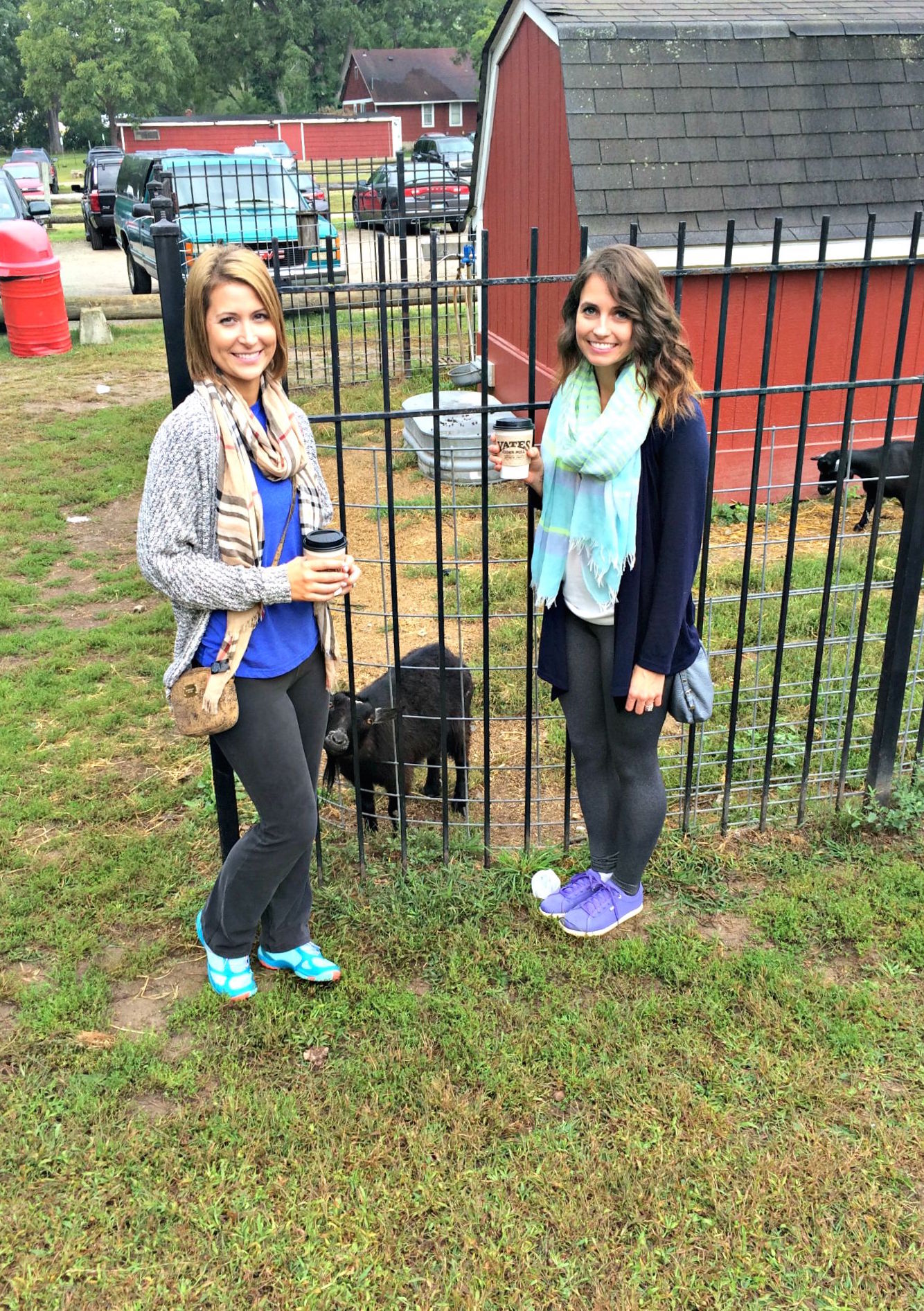 I always love seeing the animals!

Scott purchased an apple pie (<- oh my gosh, homemade apple pie from the cider mill is the best), and they did their best to try and get it through the fence! Poor babies. I totally would have shared. After the mill, we drove around the area and took her through some of our favorite stops. About an hour later, we returned home and got ready to meet friends for dinner in Birmingham.

Earlier in the week, I mentioned to Scott that I wanted to take Meggan to Birmingham. It’s one of my favorite nearby cities to visit whenever people are in town and reminds me of the Winter Park area back home in Orlando.

While there were several spots we could have chosen for dinner, we wanted to check out somewhere new, and the three of us joined our friends Alex and Alex at Streetside Seafood.

Known for its fresh seafood fare, the restaurant is a small, yet popular spot to dine. It’s rated one of the top restaurants in Birmingham on TripAdvisor! We had about a 40 minute wait for a party of 5 and took our time enjoying the atmosphere while we dined. 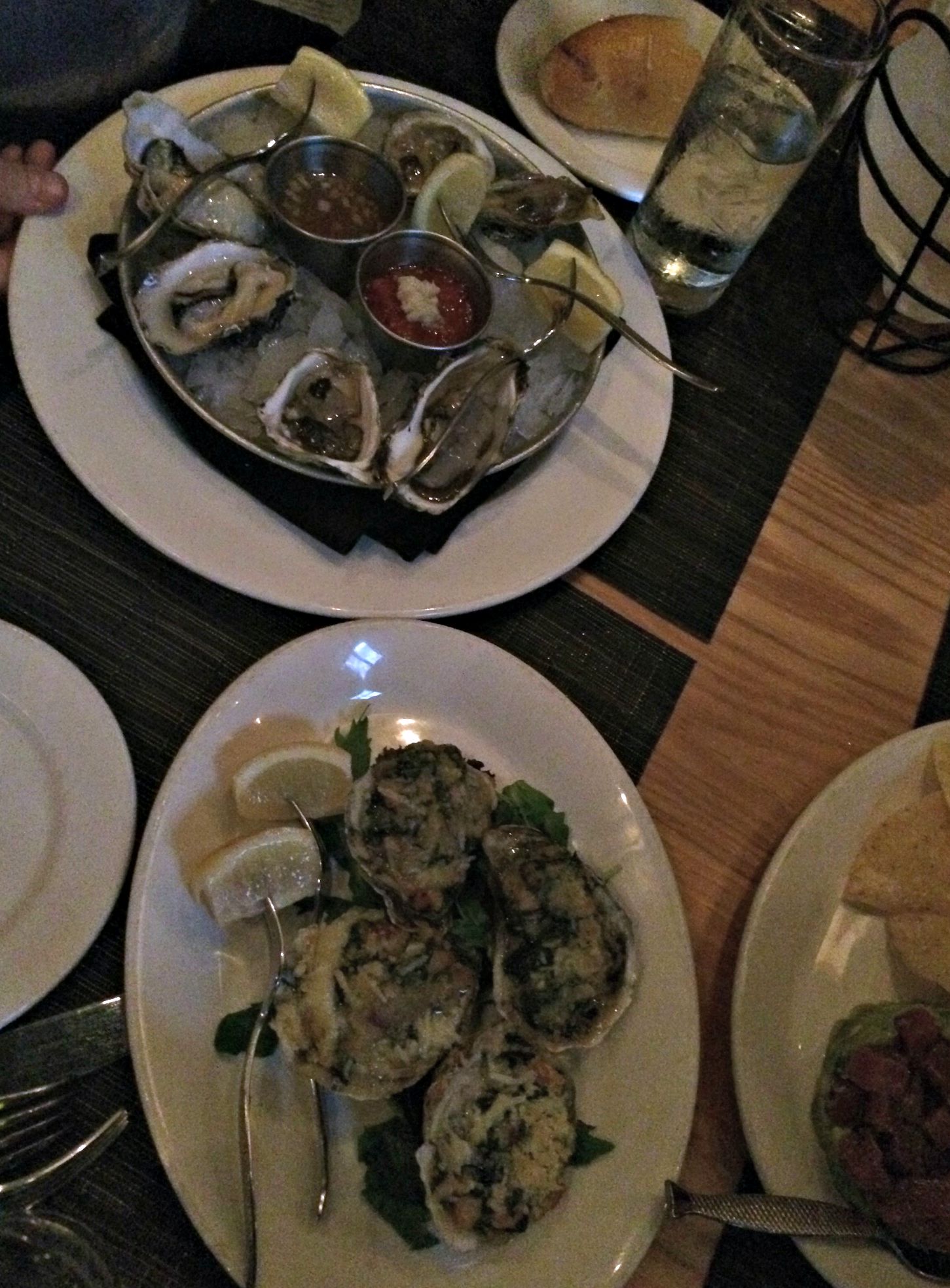 The boys ordered a round of oysters for the table, and I finally budged to try one. They’re still something I’m not fully on board with, but I can appreciate them.

Thanks to the cider mill donuts and the delicious (and filling) bread, I kept my order simple with a house salad to start. 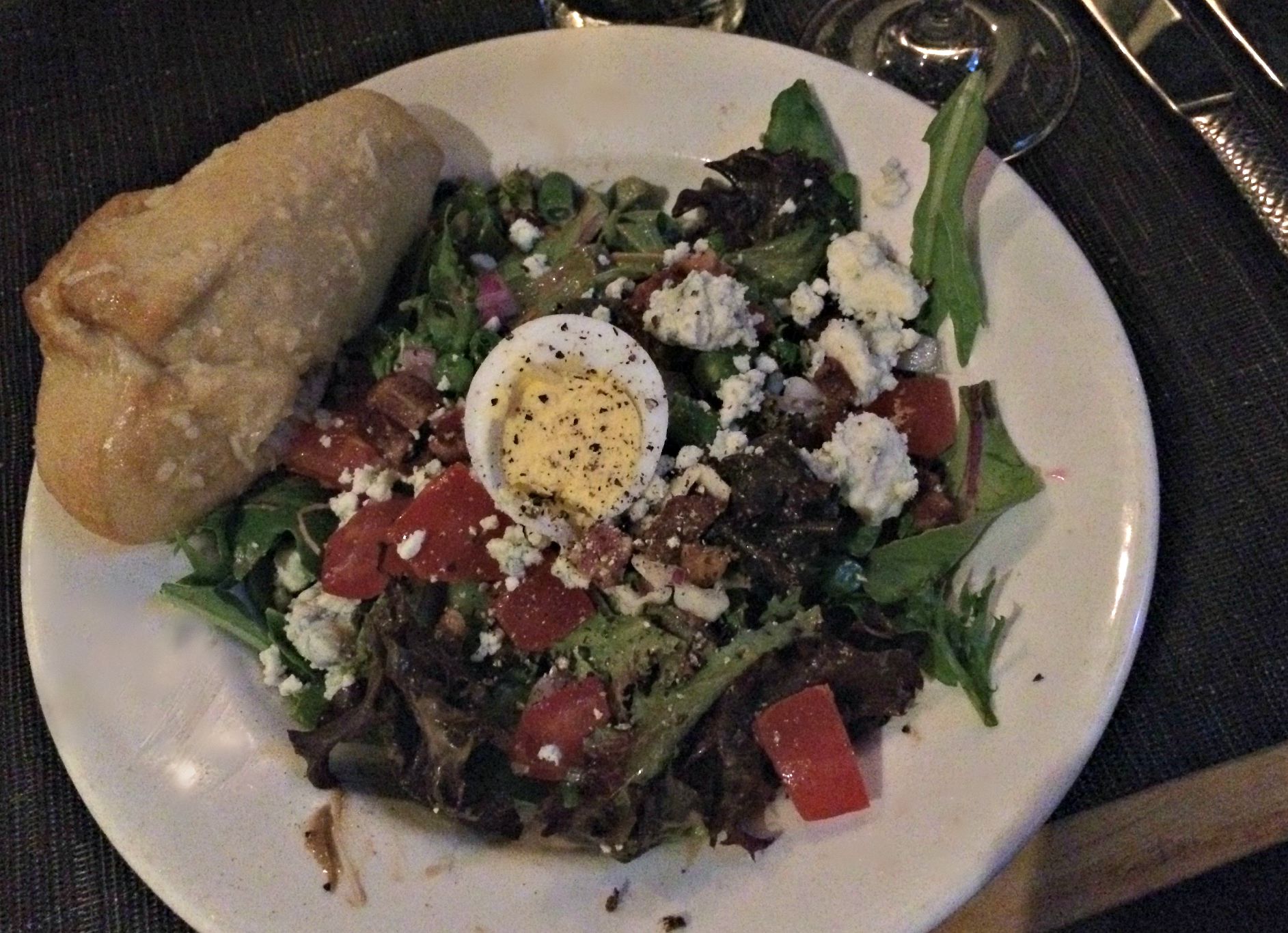 I then ordered the Crab Cakes appetizer as my entree, and also tried one of Scott’s Fish Tacos. 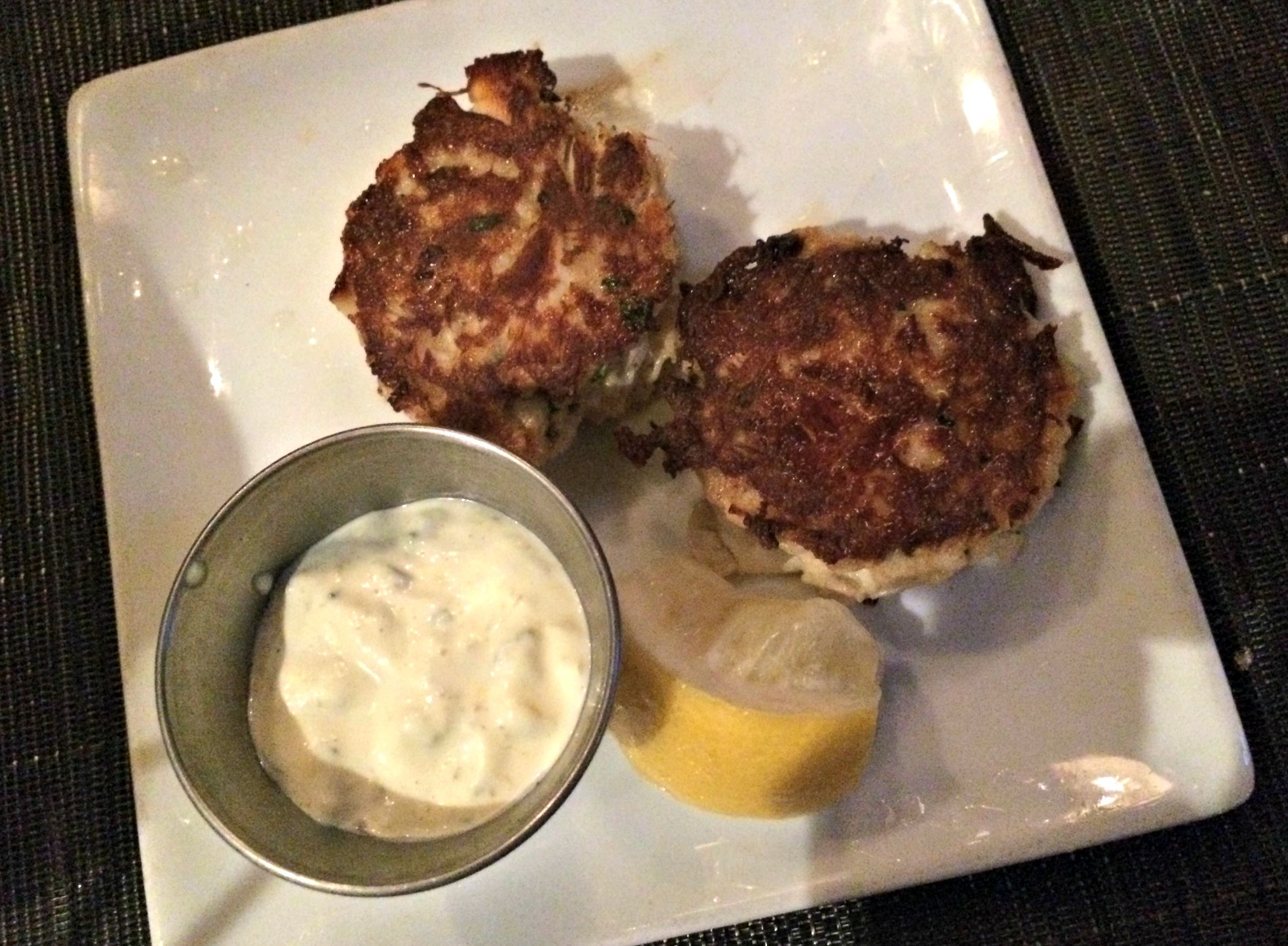 I made sure to save room for dessert, and our table ordered a few dark chocolate crème brulees and a key lime pie. I took a picture of the brulee to share, but it turned out awful. Just take my word that it might just be the best thing on the menu!

Overall, we enjoyed our dinner and the restaurant, but it was so incredibly slow. We sat down at 6:30 p.m. and didn’t leave until after 9! We weren’t in a rush or anything, but we also would have preferred to order our entrees before we finished our appetizers and sat around for thirty minutes.

The food was great, but there are plenty of other spots in Birmingham to dine, too. I’m sure we’ll return, but it might be a little while. Regardless, I’m glad Meggan was able to join and that we could show her around the area! 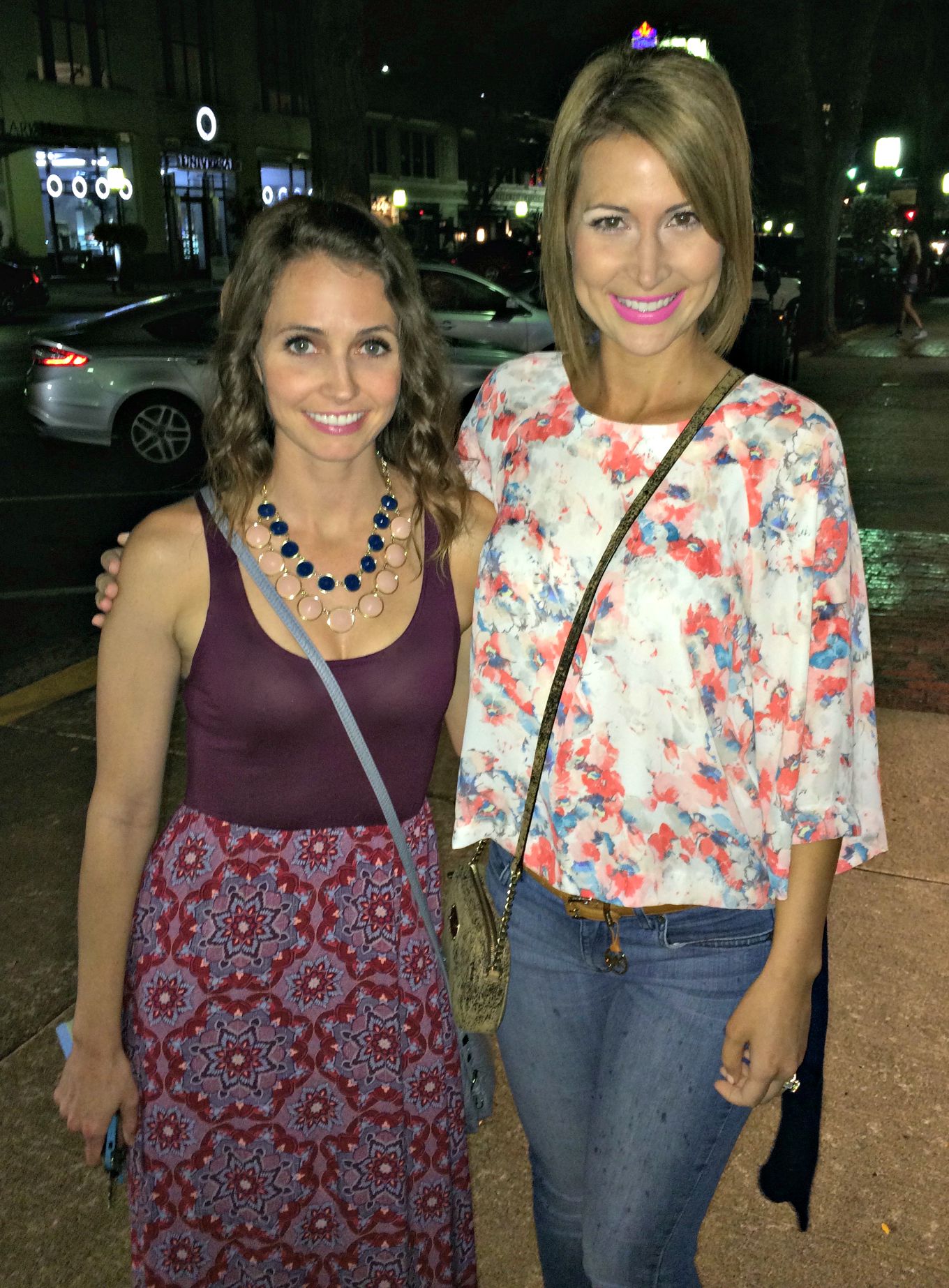 We planned to make a trip over to The Oakland for a round of artisan drinks after dinner, but there was a 2 hour wait for a table there. Crazy, right? Instead, we drove back to Rochester Hills and spent the rest of the night watching Netflix shows. (No complaints all around!) Working and working out at the gym Friday – stay tuned for a new one coming your way tomorrow! 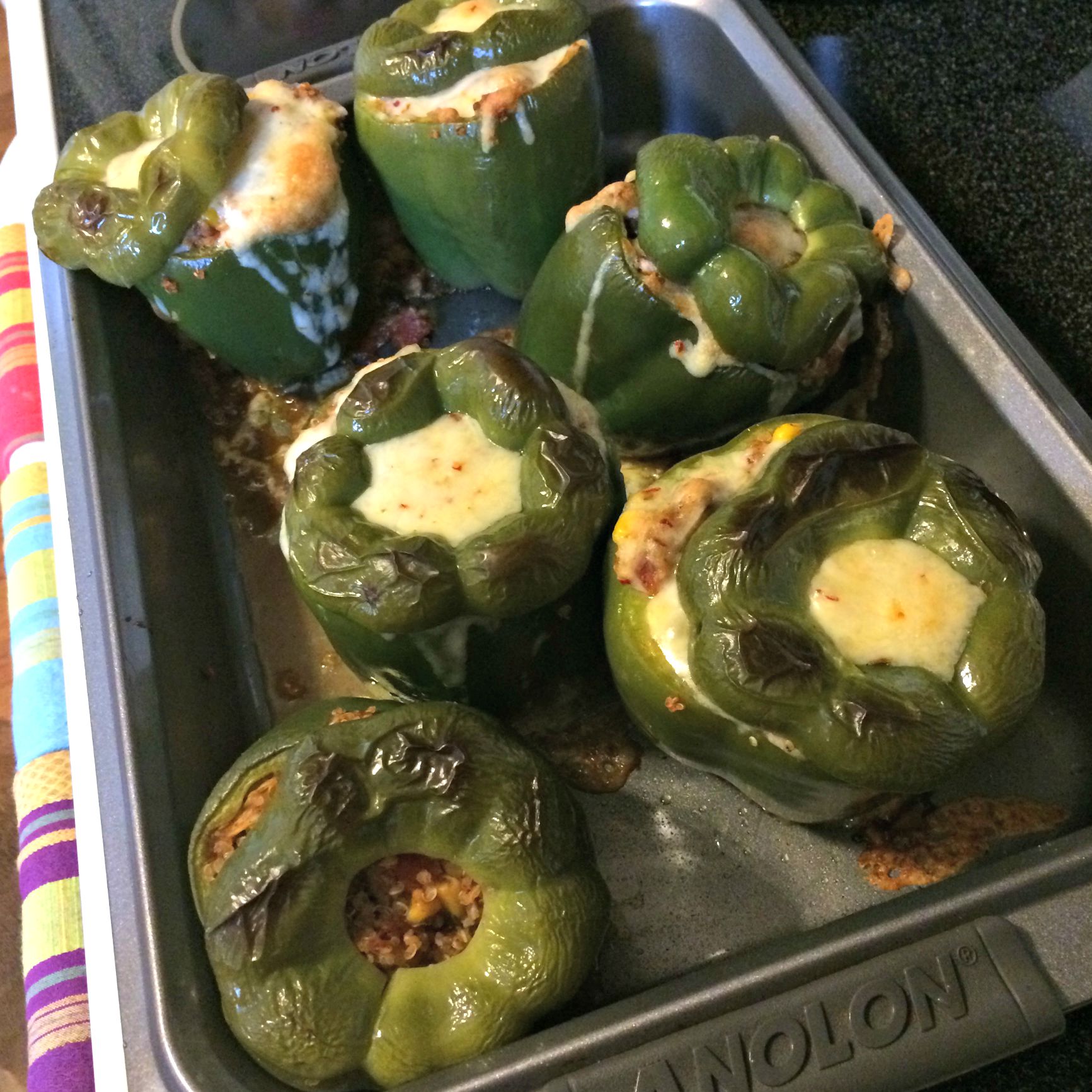 Homemade Turkey and Quinoa Stuffed Green Peppers, courtesy of Chef Scott (the recipe will be coming soon as well.) 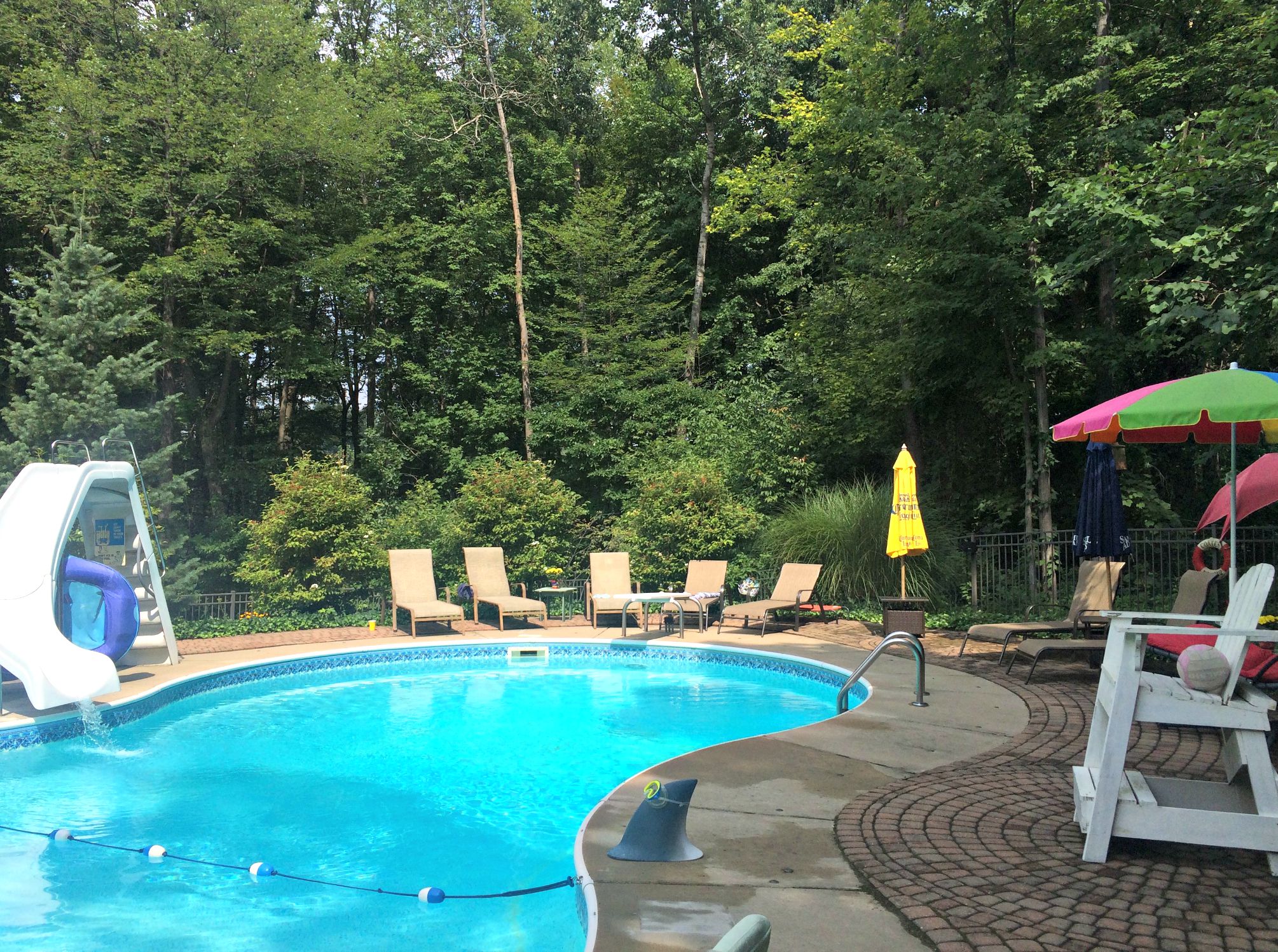 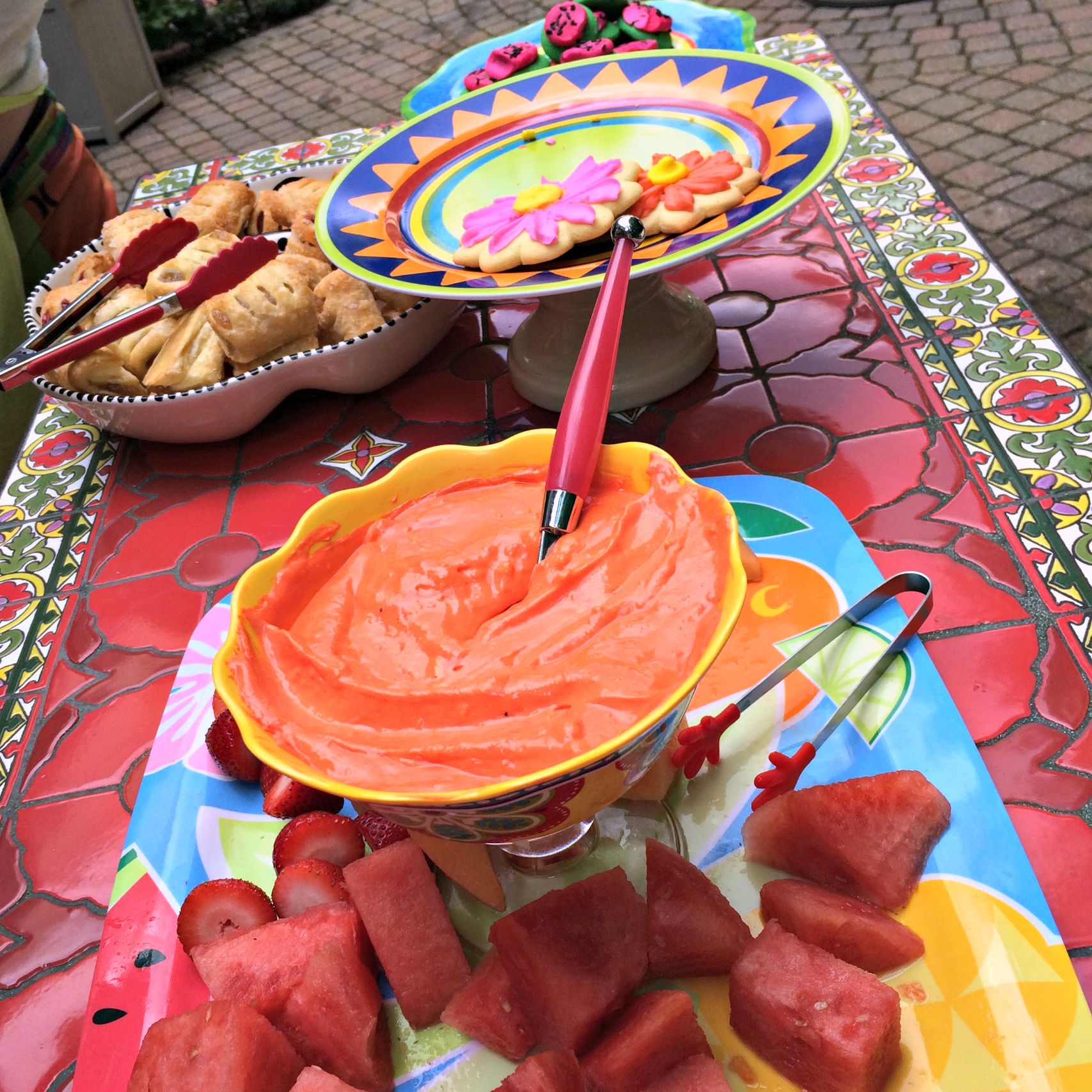 A family run around the neighborhood 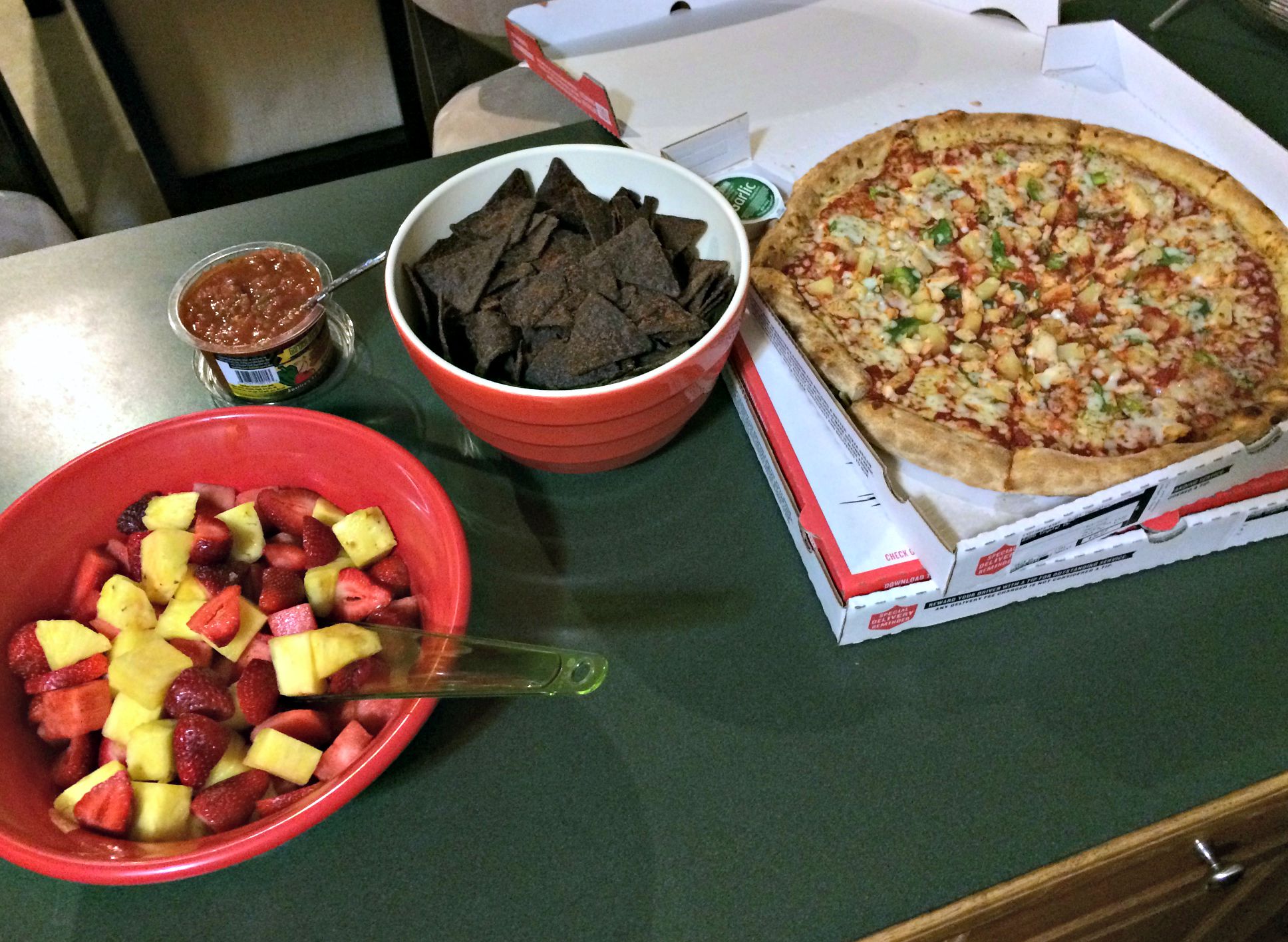 And entertaining some of Scott’s friends

It was a busy, but great weekend!

I’ve got to get going and off to work for the night, but I’ll be back in the morning with last week’s Weekly Workouts. Have a great rest of your Monday!

» Linking up my Weekend Snapshots with Katie and Erin

• What is one highlight from your weekend?

• What was on your last pizza order?

While we don’t order it often, I truly believe you can eat anything in moderation and remain fit and healthy. Pizza is certainly welcomed into our home, but it’s a treat more than a regular occurrence. Both Scott and I love to load our pizzas with everything possible. I prefer to order a veggie pizza, then we add meat to it for him. This time around we had some kind of Greek Hawaiian and it was awesome!