It may sound kind of silly, but this is one of our favorite holidays because Mr. Hess has Irish routes.  We always celebrate by eating a traditional Irish meal, usually followed by enjoying the night at an Irish pub (imagine that!) I love the shamrocks, the green carnations, leprechauns (well, the ones that aren’t creepy), and celebrating the Irish culture in general.  I thought this would be the perfect opportunity to talk about this since March is now here, and St. Patty’s day will be here before we know it!

I explain more in the video, but originally Mr. Hess and I wanted to theme our wedding around St. Patrick’s Day and have an Irish wedding.  We wanted it to be in March (OMG that would be NOW) and wanted it to be GREEN and white.  I LOVED this idea, because it kind of felt like I would be joining the Irish culture, through marriage – and I’ve never felt a connection to any kind of culture before.  Here some of my thoughts below…and oh, ignore the middle of the video where 2 random things happen: Mr. Hess asks me for directions on where we are going and then the audio sounds like it’s going to blow up! Those both will pass…lol.

Well, you’ve figured out by now, this theme didn’t happen and it’s for two reasons: 1) Timing – IMPOSSIBLE! We are only about 2/3 done with our regular work season and 2) Half of our guests or even wedding party members wouldn’t be able to be a part of it if it wasn’t during the off-season or summer.  Plus, this gave me 4 extra months of planning time….and boyyyyyyyy do we need that!!!!  So, we didn’t incorporate the whole Irish theme into our wedding, but we might throw a hint of it in here in there – so look out for it!

With all of that said, you will now understand why Mr. Hess and I originally wanted to purchase claddagh rings for wedding bands!  A WHAT?! A claddagh ring!  I’m sure you’ve seen one before…the design features two hands clasping a heart, and usually topped with a crown. The elements of this symbol are often said to correspond to the qualities of LOVE (the heart), FRIENDSHIP (the hands), and LOYALTY (the crown).

Claddagh rings may be used as friendship, relationship, eternity, engagement, or wedding rings depending on the intention of wearer, or the intention of the giver if the ring if it is a gift. There are three traditionally accepted ways of wearing the ring which may signal someone’s relationship status:

1. When worn on the right ring finger with the heart pointing to the fingertip, the wearer is free of any attachment.
2. On the same finger with the ring turned around, it suggests someone is romantically involved.
3. When the ring is on the left hand wedding ring finger it means the person is married or engaged.

Clearly, you can guess which way Mr. Hess would wear his ring, but I on the other hand had a challenge.  I have a beautiful engagement ring, and would have to wear the claddagh ring on my right hand, which would be a different meaning than his.  So, we’ve decided – we STILL want claddagh rings, but will purchase them on our 1 year anniversary.  The only way Mr. Hess agreed to this is because I threw in this gem of an idea: “How about we go to Ireland for our 1 year anniversary and purchase authentic claddagh rings there!” Perfect right? Well, he went for it….YAY! So I’m keeping my fingers crossed that we can make that happen!

For now, our next ring adventure will be purchasing our actual WEDDING BANDS!!!! How freaking excited am I?! Yup – you guessed it…pretty excited.  I’ll keep you updated on how that search is going, but I’ll leave you with a few ideas of what kind of claddagh ring I will hopefully be wearing a little under a year and a half from now.  There are SO many options – but I’m pretty sure I would go with something like one of the following…and of course, the first one is pink: 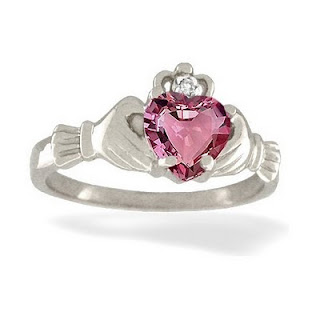 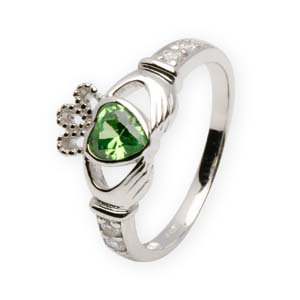 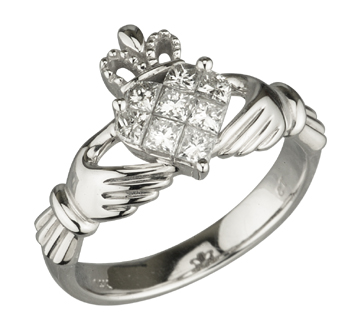 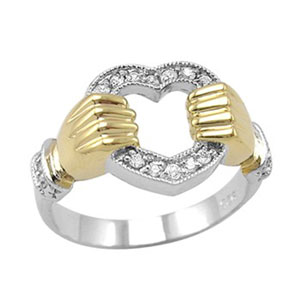 The different variations and ways you can personalize this ring are endless! I don’t know the best link to give out to find these rings, but there are some great pictures and information about this ring if you simply goggle claddagh ring.  I will have more information on this later, when I actually research on getting OUR claddagh ringhs! And like I said before, my dream would be to actually pick up a set of these babies if we actually get to GO to Ireland for our 1 year anniversary there.  It’s going to be hard not to purchase one of these before then, because I think they are adorable and I really like the meaning behind them.  I’m looking forward to learning more about the Irish culture with Mr. Hess and starting our own claddagh ring collection!

A year and 141 days until that anniversary trip happens!
Until Next Time,
Presh