Holy Monday ya’ll. I can’t believe it’s already late in the afternoon and I am just now putting together today’s post…

I’d tell you all about my day but I have plenty of other weekend highlights to share with you instead, including a fun 5K recap! 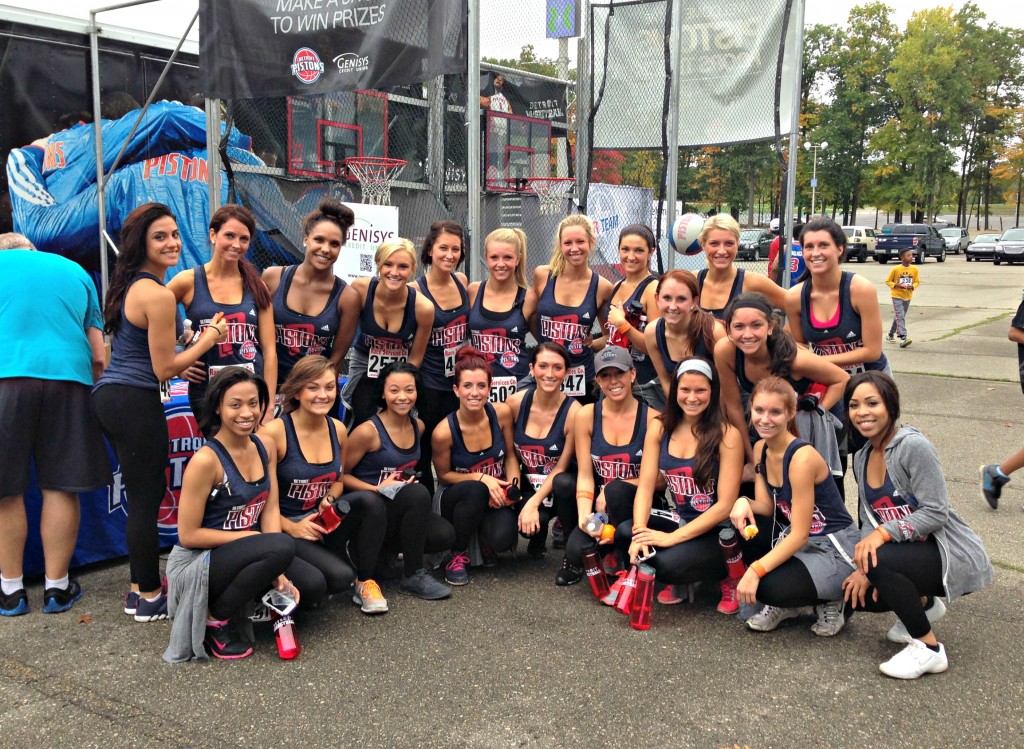 This weekend = pretty marvelous, so although I’m late, I’m linking up with Katie and others to share snippets of what made our weekends. There’s a crap ton of photos today, so let’s just get right into it!

Our official season doesn’t kick off until the end of the month, but we already dove right back to performing for an arena full of Pistons fans at Saturday’s Open Practice. 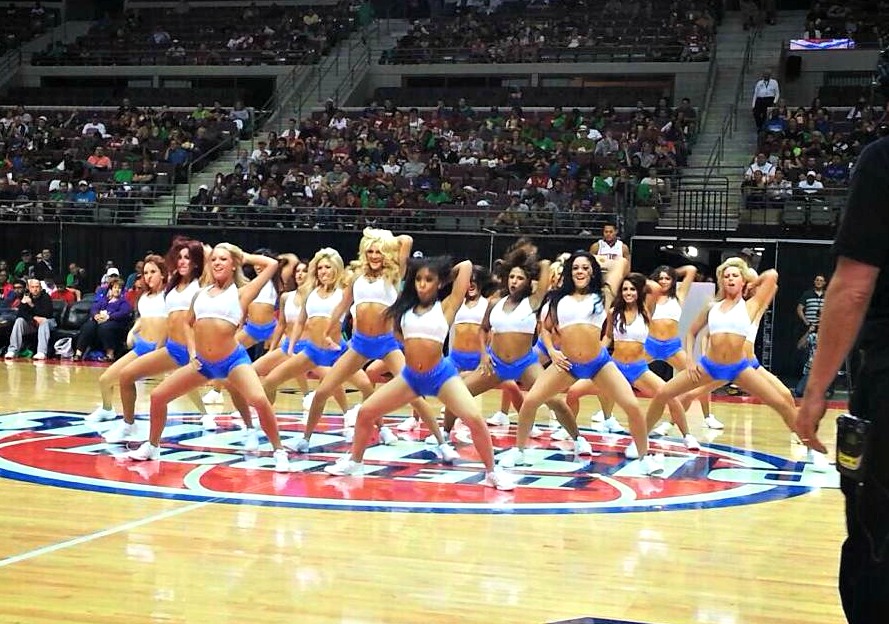 Basically, it’s a free event for season ticket holders and fans to come see what the player practices are like. A few of the entertainment teams were there to make it feel more like a game and we were all pumped to get back on the court and debut our new 2013-14 team!

Everything went really well, which makes me even more excited for tomorrow’s first Pre-Season game! Scott and I spent the afternoon eating lunch and hanging with a handful of friends, then spontaneously decided to stop by a local cider mill before heading home. 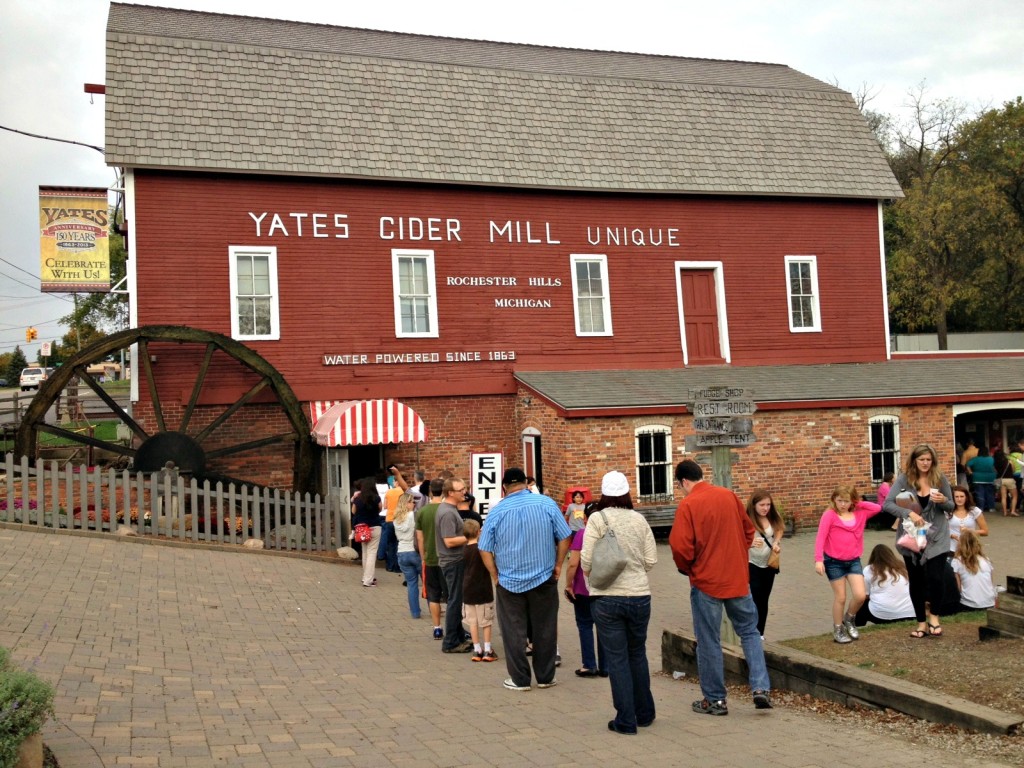 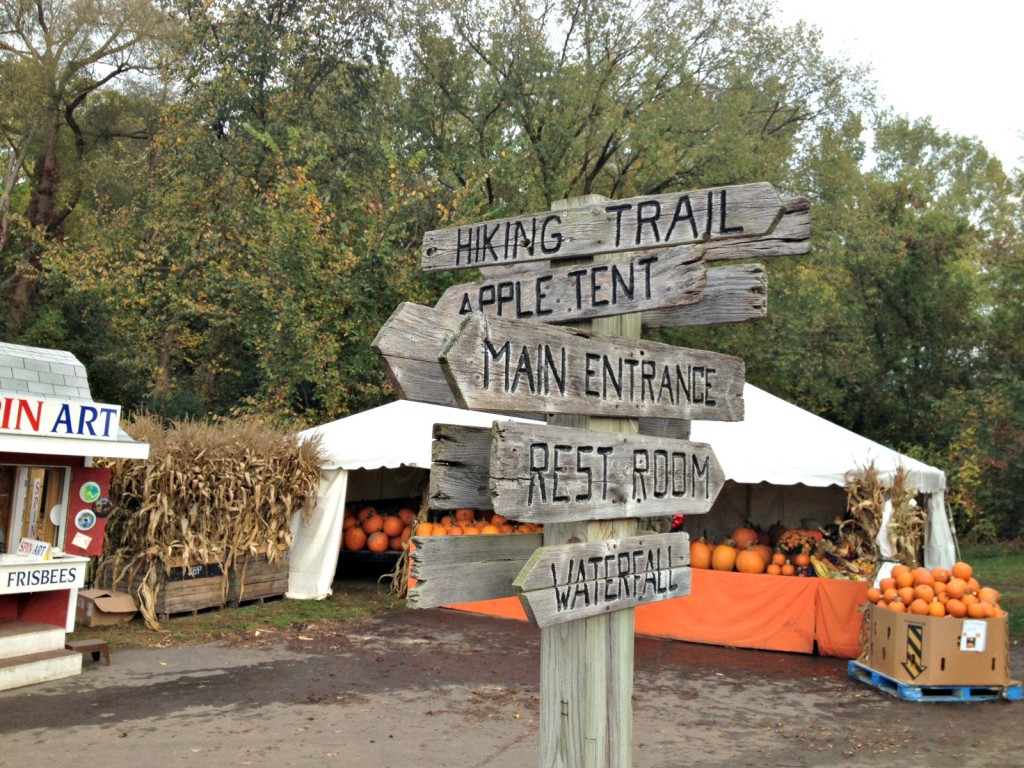 This mill has more activities and things to do than most I have been to on property, including a place to pet farm animals. Check out the white goat on the very top! 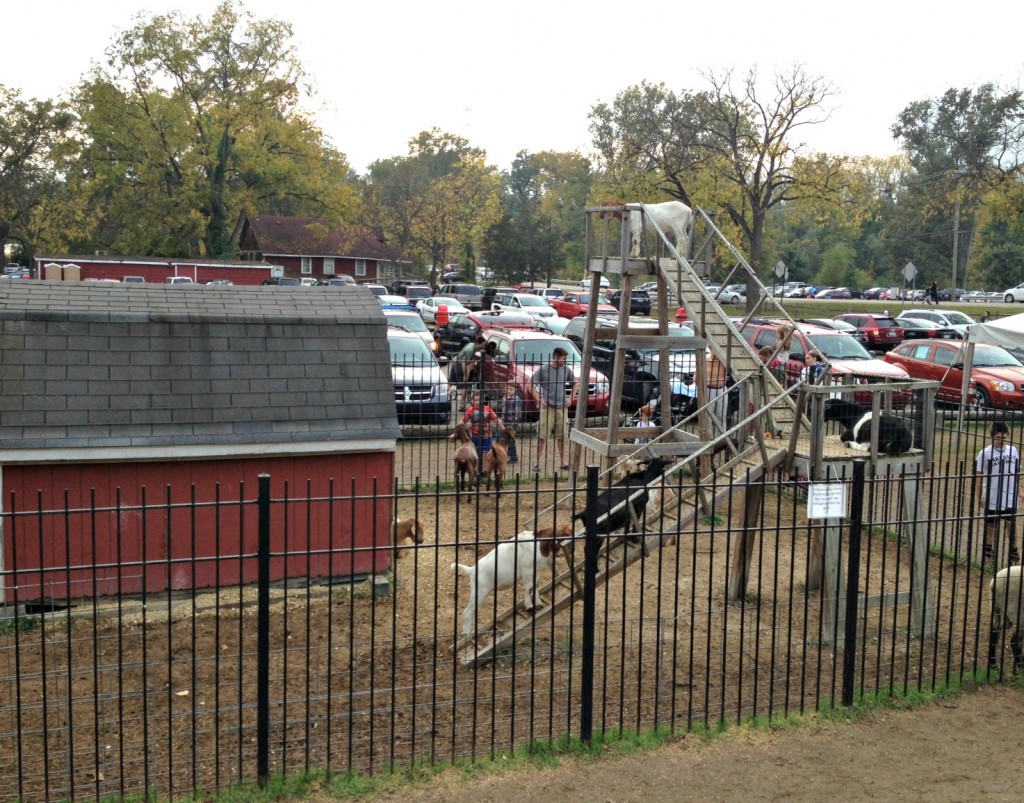 That guy hung up there for a good fifteen minutes, and Scott and I had a few laughs about the confusion it was causing the other animals. Eventually, we made our way over to the cider shop, but not without soaking in some beautiful fall scenery first.

We also may have purchased a few treats.

Scott opted for the caramel apple…

while I indulged in the cinnamon donut.

After all, you just can’t leave a cider mill without a half gallon of cider and at least one donut.

In the fall spirit, I decided to take my workout outdoors and enjoy the fresh air while it was still light out. I quickly put together a fifteen minute circuit workout for a guest post I will be sharing with you next week! 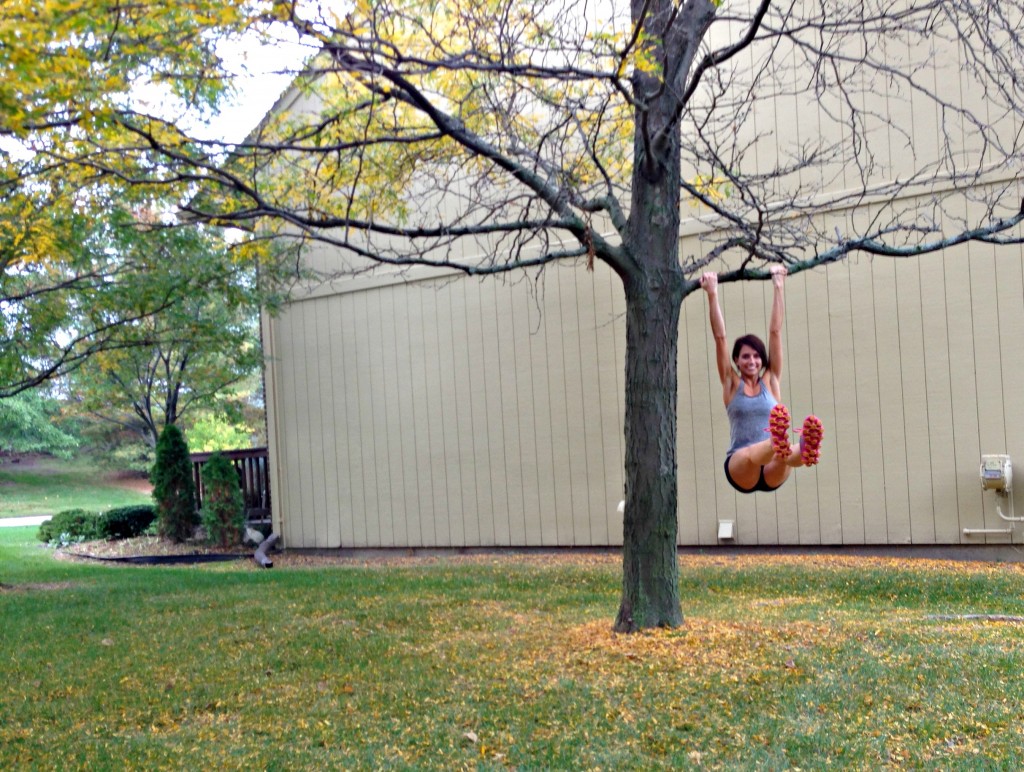 After a shower, Scott and I spent the remainder of our Saturday night curled up on the couch watching college football.

Our early turn in Saturday night helped us get out the door bright and early Sunday morning!

Both Scott and I worked (and ran!) the Pistons Fit 5K, put on buy our favorite Detroit Basketball team. I arrived a little after 8:30 a.m. and was greeted by a lot of familiar faces to cheer us on. 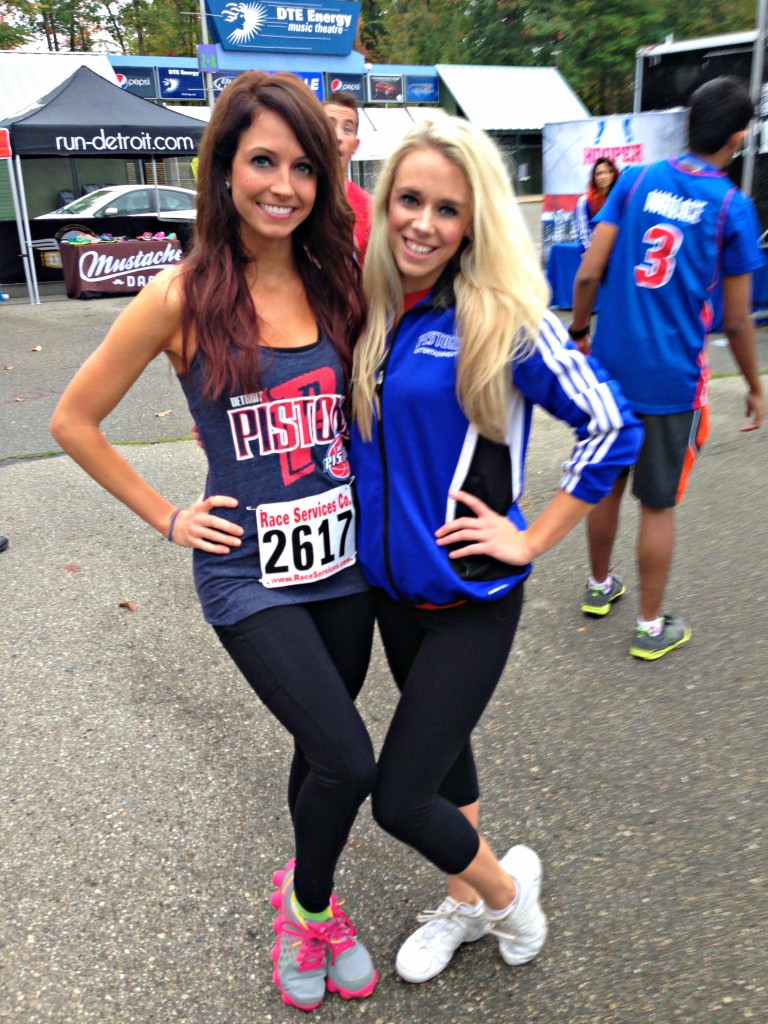 Once I signed in, got my bib, and went to the restroom, it was time to kick things off with the first race of the day: The Fun (1 mile) Run with HOOPER!

Their race lasted about fifteen minutes, which gave us plenty of time to get situated in a starting place. 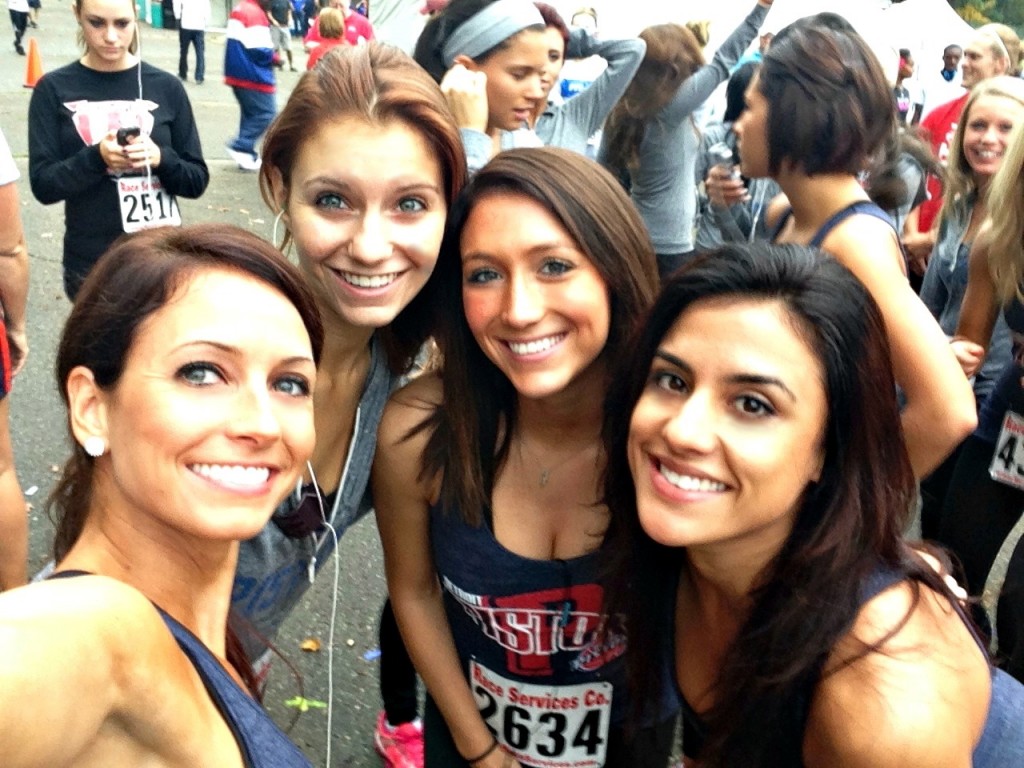 Right before go time, we cheered the kids on and got hit with silly string by the crazy horse. I swear he always pulling some kind of shenanigans.

I was excited for this race for two reasons: 1) I have never run a “real” (no obstacles included) timed 5K race and 2) My entire team was running it with me! We all started in groups at the starting line and a lot of us didn’t waste any time sprinting into a quick pace for the first mile.

Knowing I normally run at about an 8:30 pace on my casual runs, I didn’t want overdo it and get a cramp in the process, so I pushed myself to run what I thought was a 8 minute mile.

As time went by, I realized I was going way faster and out of nowhere found energy to speed past an entire group of people! There was a point at the last half mile where the track turned around, which was great to see and get motivated by fellow teammates at the last stretch.

Our director, Natalie (second from the left) smoked us all and won best overall female time for the entire day, clocking in at 20:37!

One by one each of our girls crossed the finish line and I was so proud of them. Running this race together definitely brought us closer and it was a really fun way to start the season together!

After a quick team practice (yes… my legs were jello) I met Scott and a few of our friends for lunch. I ordered a soup and salad, and since it wasn’t anything special I’ll skip right over those pictures.

As soon as we got home and showered, Scott and I were both out like lights. While I take advantage (and looooove) afternoon naps, Scott rarely ever takes them, which made it extra nice for a rainy Sunday. I fell asleep next to Scott and woke up with all three of our fur babies in between us, all snuggling together. 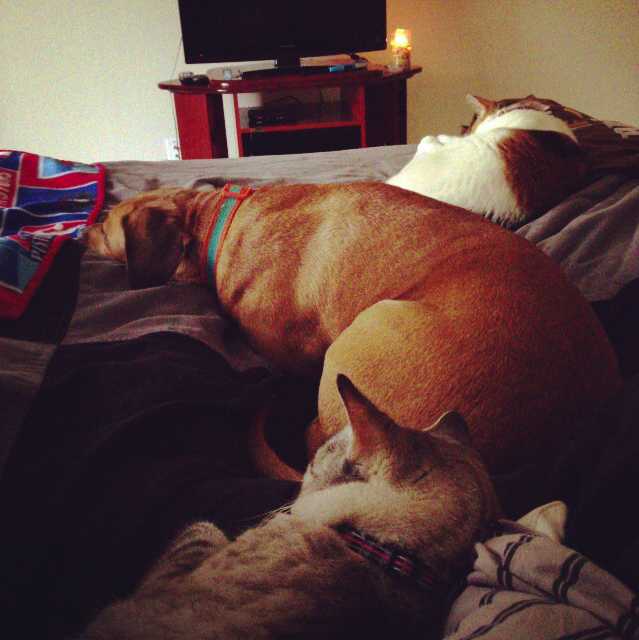 Are they not the cutest? I die.

As soon as we were up and moving my appetite had me rummaging the refrigerator, and we split Thai leftovers and a grilled chicken chopped Subway salad for dinner. 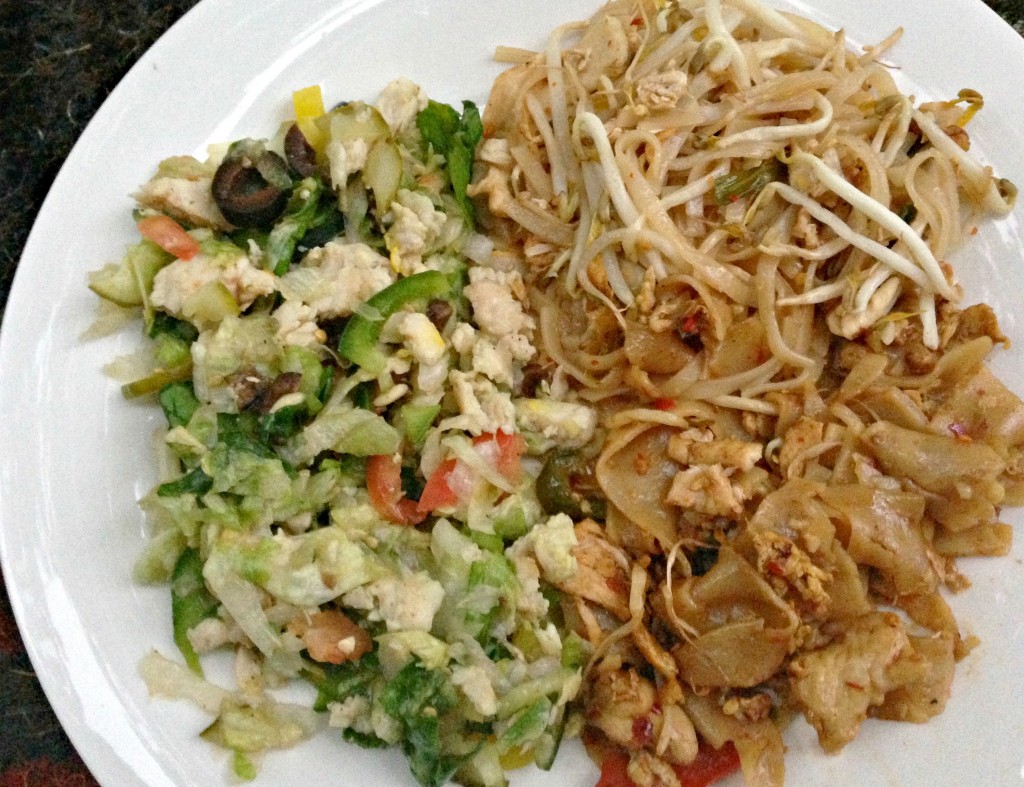 Soon after, I heated us both up a mug of hot apple cider which hit the spot.

While I wasn’t planning on doing anything else for the day, Scott wanted to get out and do something low-key. A frozen yogurt date turned into fro-yo, coffee, and a movie! 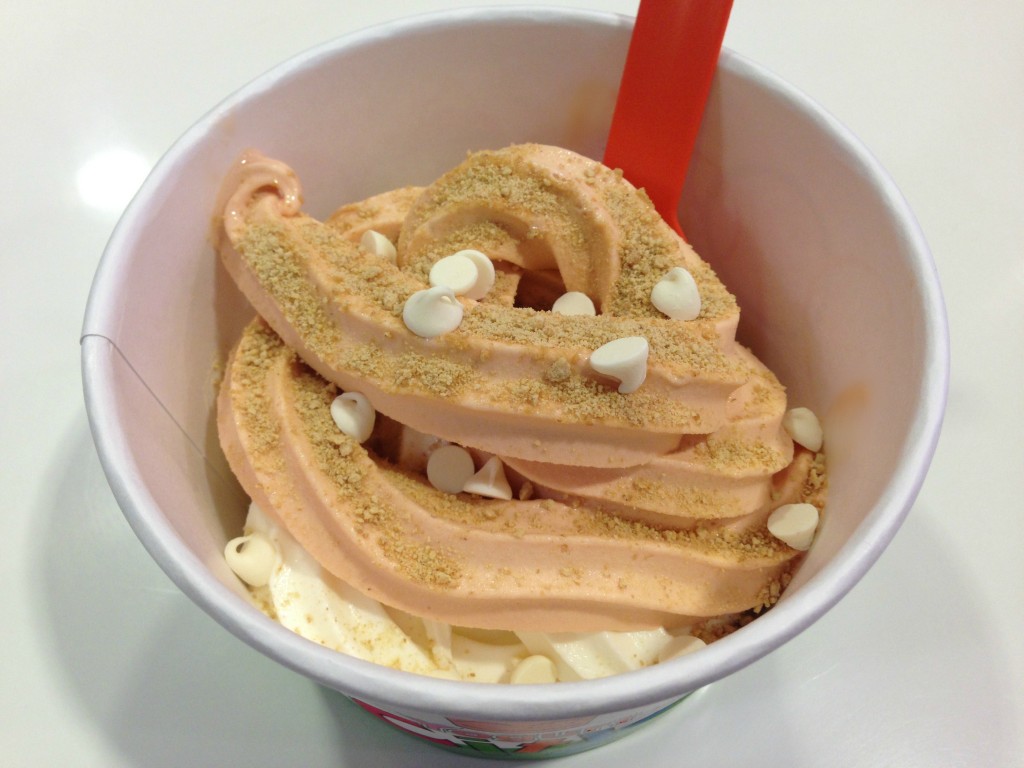 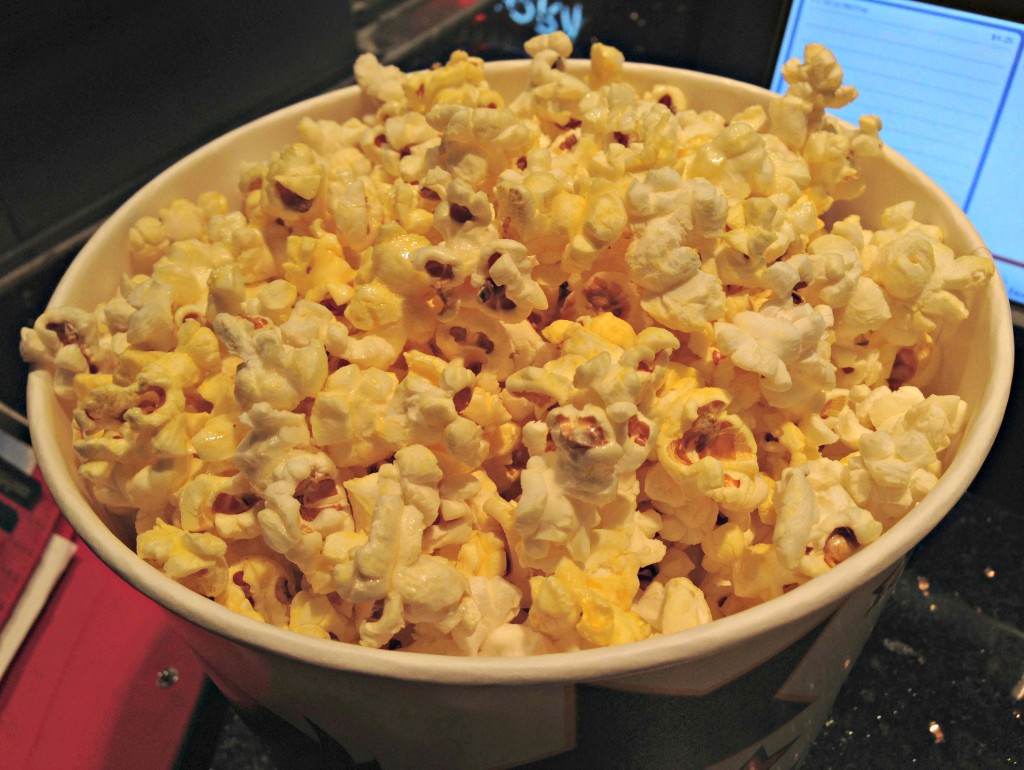 Everything (especially the fro-yo) was really good! I clearly lived up the rest of my “last hurrah” of treats before game season anddd I got to enjoy Justin Timberlake on screen for an entire movie screening. No complaints here!

Looking back on the weekend, it was an action packed one, but I’m so glad we were able to fit so much in. Little by little, we are checking off activities from my Fall Bucket List and have a lot more to look forward to in the upcoming weeks. Can’t wait to tell ya all about it!

• What is your favorite kind of frozen yogurt?

• Have you been enjoying any kind of fall activities yet?

Although I would put almost any kind of fro-yo in my belly, I look forward to any kind of seasonal pumpkin flavor all year long. It’s herrrrreeeeee! I usually fill my bowl pretty high, but keep the toppings to a minimum with this one. All other flavors, however, load ’em up!

It’s been an emotional few weeks for sure. But w

If you’re not an avocado toast person, I strongl

𝐓𝐑𝐔𝐓𝐇 💣: If you keep doing what

We are still taking things one day a time over her