Say that title three times fast. I dare ya!

Good Morning! Today is going to be an eventful one, as I’m heading out to a morning of assisting the crazy horse again.

He’s keeping me quite entertained and busy these days!

In true Wednesday fashion, I am here to highlight an entire WIAW day of eats and am also sneaking in another upper body + core superset workout in the middle of it.

Very similar to last week’s, yet changing it up for those who like variety. Lets get right to it!

What I Ate Tuesday

I wanted to mix it up for breakfast yesterday.

Good thing Kashi Cinnamon Harvest cereal was calling to me, because that’s all I really felt like putting together!

I attempted to make it “fancy” cereal by adding sliced bananas and a couple of spoonfuls of almond butter.

I took the first photo before I added the unsweetened almond milk, which is weird. But the point in posting the close up is to share that, along with the fact that any kind of butter on top of cereal tastes incredible!

A couple of hours later, I took a peek into the refrigerator and made myself a bowl of fresh watermelon balls for a snack.

Except they weren’t anything close to melon-ball shaped. That’s a melon baller fail if I’ve ever seen one. Yeesh.

That seemed to keep me content until lunch rolled around just a little after 1 p.m.

With an unsweetened iced tea on the side, I enjoyed the rest of this loaded veggie salad I put together the night before.

Yup, I said pickles. I guess I can thank Subway for introducing me to that concept. They have them right there cut up and ready to put on sandwiches, so every time I get a chopped salad, I have to include them.

I just love that stuff.

Not a cottage cheese fan? What is it… the texture? Hey, I won’t make you eat it. That just means there will be more for me!

A few hours later, I pulled out my most predictable snack ever. 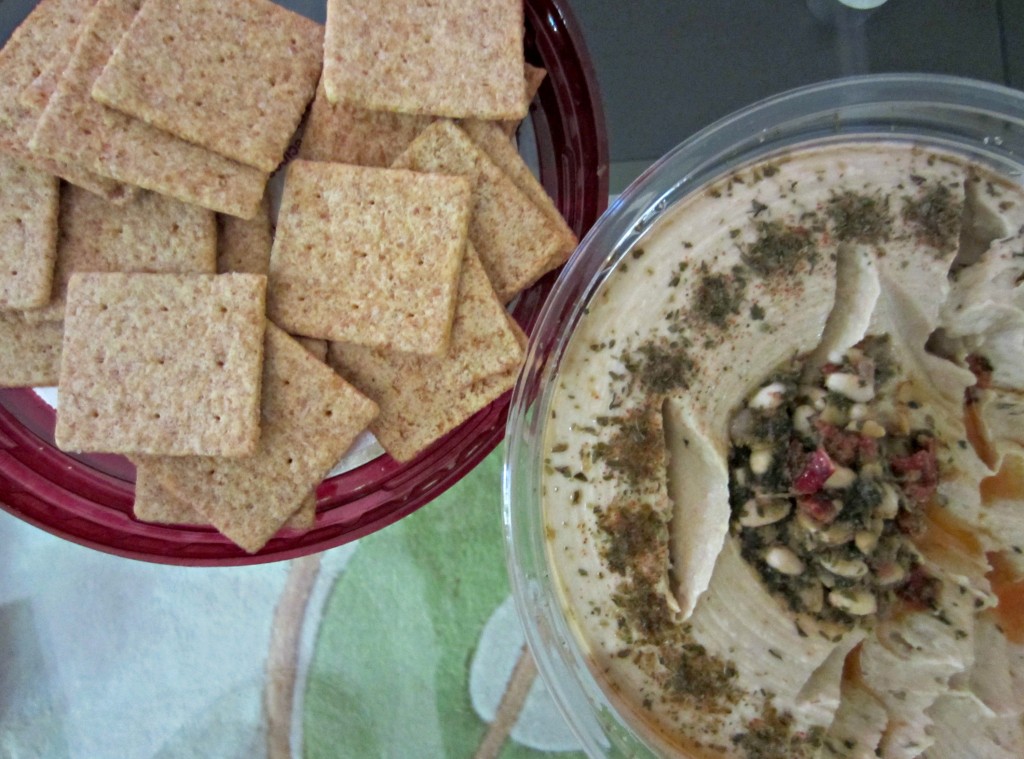 I kept busy the rest of the afternoon by finishing up my work on the computer, then getting to work around the house.

I tidied up for a bit, but spent the next few hours organizing the pile of mail and receipts that has been stacked on our kitchen counter for months. Okay, maybe even a year.

That turned into organizing the files and pictures on my desktop computer which felt like a huge weight lifted off my shoulders when I was done.

Majority of the time, organizing is the last thing in the world I want to do. Oddly enough, that wasn’t the case yesterday. I threw some music on and actually enjoyed myself! Weird.

Sometime during the cleaning spree I grabbed a pickle.

I then went downstairs until Scott got home from work. Somehow, he talked me into going to the gym instead of going for a run outside.

Good thing, because I have the workout we came up with and completed together to share with you. It’s a good one that should only take about thirty minutes to complete!

Very similar to the Upper Body, Core Superset Workout I shared last WIAW, this one has the same muscle group(s) focus with a slight change up in order and exercises. Personally, I think awesome describes it accurately.

This week we skipped the cardio and hot tub, since it was nearing 9 p.m. and decided to head home for dinner.

Scott proceeded to then talk me into stopping to get slurpees on the way there. I guess he has a way of convincing me, considering that was the second arm twist of the day.

I joked that it wasn’t the best recovery drink post-workout, and my next thought automatically questioned if protein slurpees actually exist. Do they? If so, please share where I can find one… or fifty.

When we arrived home, I went straight for the freezer for dinner.

I wasn’t messing around with any type of cooking and luckily Scott was on the same page. I quickly heated up a gluten free cheddar cheese burrito from Amy’s which, I swear, usually looks a lot more appetizing.

It certainly tasted better than it looked!

We finished the night off by watching the NBA Finals and I enjoyed a mini bag of Smart Pop Kettle Corn.

And I guess that just about wraps things up.

Have a great Wednesday!

Question of the Day

• What’s one snack or frozen drink you can’t ever say no to?

• If you liked this WIAW post, head on over to Peas & Crayons to check out plenty others, or even link your own!

• Also, you can always find my latest What I Ate Wednesday posts by exploring the “WIAW” tag on the right hand sidebar.

Leave a Reply to Rachel @ Blonde with a Chanse Cancel reply

Saturdays in Brooklyn almost always include a stro

Getting home from a week-long road trip’s got me

Fall is officially here, and it’s my favorite ti

In honor of National Coffee Day, I thought it woul

How can you extend that summer tan and keep the gl

It’s fall, so you know you’re going to start s