It’s Wednesday already and I am still glowing with excitement from Dwight Howard’s Celebrity All-Star Weekend.

Scott had the incredible opportunity to be the producer of the main event and completely blew me out of the water!  I have always known that Scott is creative, talented, wacky and a bit risk-taker.  When he was asked to take on this (HUGE) project and create something reputable for the D12 brand in 11 days, I honestly wasn’t sure what he could pull off in such a short amount of time.

I had my doubts – not what he is capable of – but more of how much time he had to show what he could really do.  A few people he was hoping for fell through at the last minute, and even so produced a well-rounded, impressive show.

Having danced in the NBA for 4 seasons, I’ve seen a professional basketball game or 200 two .  I know the flow of games, how time-outs work and what an entertaining game looks and feels like.  Watching my husband produce a HUGE game sponsored by one of the biggest players in the NBA was an amazing experience for me. 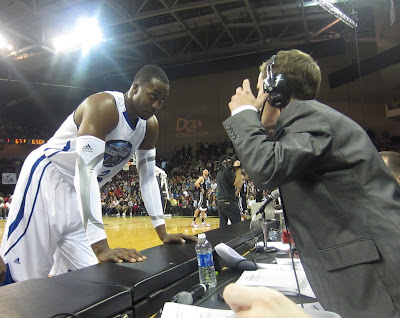 And when I say watching, I mean spending the entire game right by his side.  Somehow I managed to score one of these VIP passes: 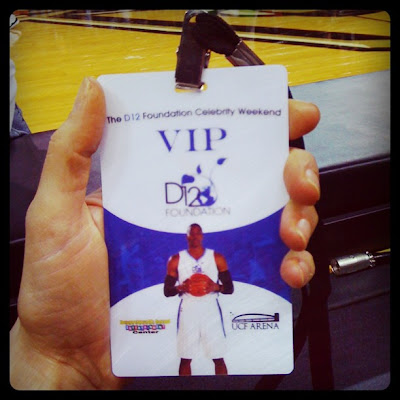 Somebody’s gotta do it, right? I felt so official, like part of the media with my pass, camera, phone and court side media seats.  Maybe it’s a preview for things to come? *Dare to dream!

Sit back and enjoy the video I put together showing the highlights from the D12 Orlando All-Star Game:

When I got to the UCF Arena, there was a D12 photo wall where you could take an official “I’m here” photo.  All I was missing was the red carpet…hey, where’s my paparazzi? 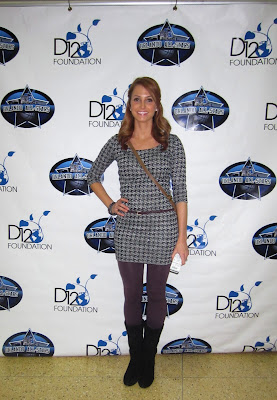 Right away, Scott’s assistant Steven walked me to the producer himself.  When I walked towards him, my heart skipped a beat because he was all dressed up (with a bow tie no less) and really made this happen. 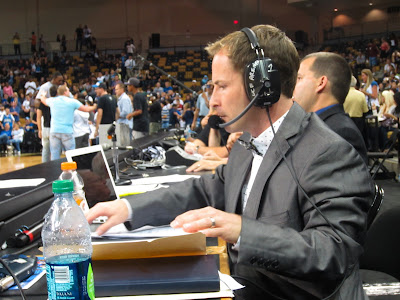 Hello, there Mr. Bowtie…nice computer you have there.
You look really busy and important, so I’ll just sit over here, drink your Gatorade and enjoy the show!  Before the game even started there was a pre-show filled with entertainment.

Right after I sat down, I was excited to see ROCK DeMarco paint a fabulous player painting. 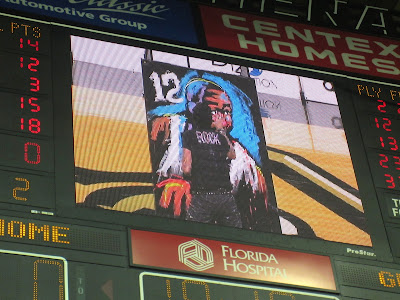 Seriously, how does he create this in 7 minutes?
“Superman” powers? 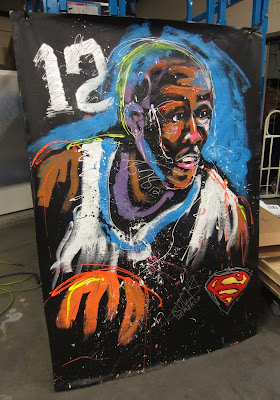 After the ROCK show a few of the entertainment acts gave us a preview of what was in store for the game.  See a full list of game entertainers here.

Even though I had front row seats to the show, I didn’t get to take as many pictures or take as much video as I wanted because of all the press and staff walking in front of me, constantly. As we got closer to the National Anthem I spotted a very familiar face out of the corner of my eye.  It was Gina Marie Incandela, known to the Orlando community as a “good luck charm”, and I was excited to see her! 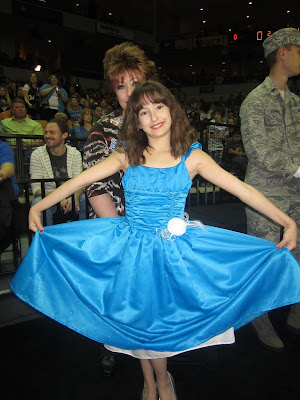 Great job, Gina!  It was finally time for tip-off and Dwight addressed the arena to show his gratitude: 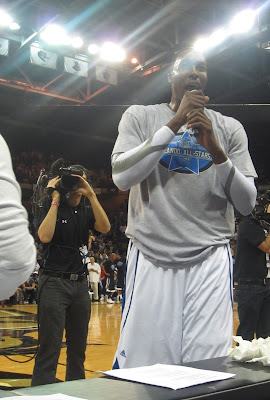 Radio DJ’s Brian and Brody from XL 106.7 were there to emcee, but Dwight took it upon himself to do player introductions.  It was funny to hear him put his twist on all of their bios. 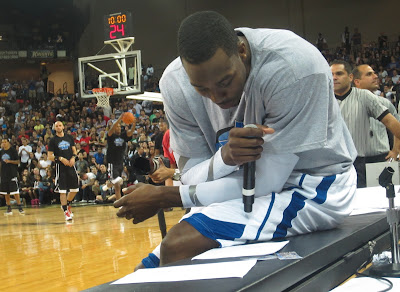 I’m not exactly sure if saying “And if it’s night time you can’t see where he is….Brandon Bass!” is the best way to describe him, but hey, it was Dwight’s night after all.

The game started and it was great to see all of the guys on the same court together.  Some of my favorites included Old School players: Courtney Lee, Marcin Gortat, Drew Gooden & Penny Hardaway.  I loved watching the New School team made up of our current players as well, with my favorites being Jameer Nelson, Ryan Anderson, Hedo Turkoglu and of course, Dwight.

Although it was well put together, the game had a relaxed feel, much like the NBA All-Star games.  Scott and I love going to All-Star every year for the same reasons, to see all of our favorite players in the same game and to see them show-off.  Since there’s no huge pressure to win, there was an opportunity for players to have fun and try dunks and plays they wouldn’t normally risk.

Like I said, I didn’t get to take many good pictures but here is one I love because you can tell they are all having fun: 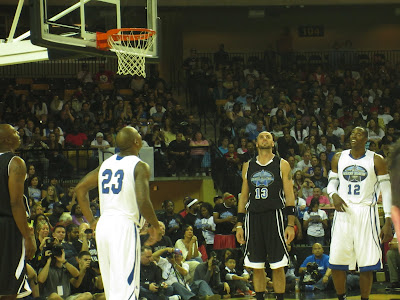 The players weren’t the only ones having fun…all of the entertainment acts seemed to be loving the event too!

Oh, and did I mention Lil Wayne and Floyd Mayweather were the coaches? I was literally sitting less than 10 feet away from Weezy and was secretly freaking out about it. 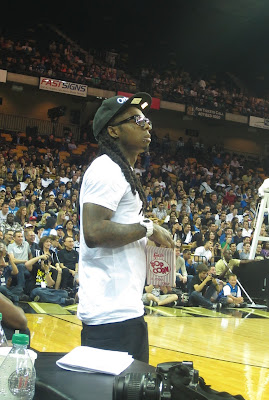 I knew I liked him – he’s a total snacker (like myself).  When he wasn’t eating popcorn he was on Sour Patch Kids.  Nervous maybe? 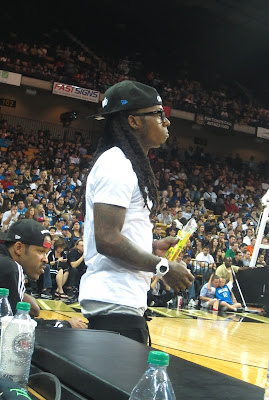 The Old School team won, but I don’t think anyone was keeping note of the score.  The entire event was fun, entertaining and raised a great deal for the D12 Foundation.

After the game was over I got to sneak back-stage and meet some of the performers:

Right when we got past the tunnels Scott was approached to answer some questions about the event and what the D12 mission is.  He stayed cool and calm and walked them through everything. 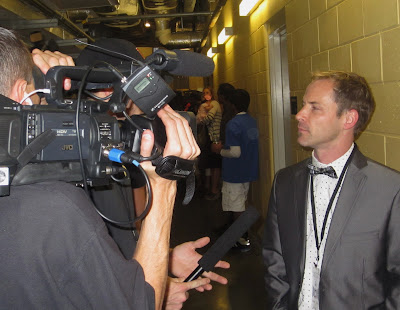 That’s my husband… 🙂 I’m having a lot of proud moments here.

I guess our prayers were heard, because getting involved and producing this event sparked something in Scott and his ideas and creativity haven’t skipped a beat.  I think producing the D12 All-Star Game is just what we needed.

Thanks to all of the performers, the D12 Foundation Staff, Dwight and all of the other All-Star Weekend staff!

Proud of you, Mr. Hesington.  Can’t wait to see what’s next! 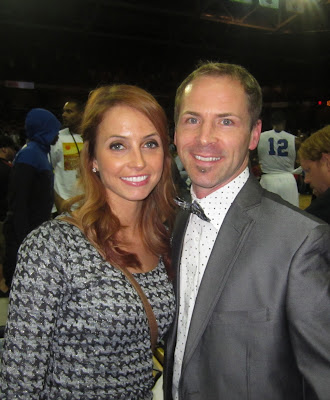