Well everyone, it finally happened.

If you would have asked me five years ago if I thought I would EVER willingly get a tattoo permanently inked onto my body I would have bet money against it.  I’ve never been one who’s into anything THAT permanent and had to triple-think something as removable as a piercing.  And, for the record, I have only had my ears and my navel pierced before… so don’t get any crazy thoughts in your heads.

Then I met Scott.  A sweetheart in a goofball’s body complete with multiple tattoos and piercings.  You can imagine my first reaction when I found out about each one, with an “oh, great” kind of response.

At first I wasn’t really into it, but I learned to look past it… learned the meanings behind them and actually became open to the idea of them.  Don’t get me wrong, I’m not going to be getting a tattoo for every big event that happens in my life.  In fact, I plan for two to be my max.  So I guess from all of this you can guess how Scott and I spent one of the best days together…

Scott had been out of town for five days and I was eager to wake up and spend an entire two days with him.

We started the morning off with breakfast at home, which happens to be my favorite meal to cook.  After basically living out Bruno Mars “Lazy Song,”  we decided to make a fun date day and night out of it and headed over to Winter Park, one of our favorite spots in Orlando to walk around and spend the day.

As we pulled onto Park Ave. we were excited to use our Groupon to The Bistro, but unfortunately the restaurant wasn’t open yet.  So we walked the Ave and found a nice little French spot called Paris Bistro.  Wine, crepes, pommes frites… I was in Heaven and we declared this as our official “cheat” day for the week.

Next up…why not a movie?  We drove over to Winter Park Village and saw My Idiot Brother which was decent, but to be honest all of the funny parts were in the previews.  Either way, we enjoyed spending time at the movies and went on for a drive.

During the drive it hit us….

Scott: “Hey! Want to get our monogram tattoos?” 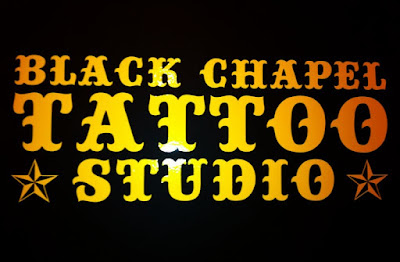 And we were off to Black Chapel Tattoo.  Neither of us have ever been to this place before, but for being relatively new it has done extremely well and they have already acquired a reputation of producing amazing work.  We walked in, showed them the monogram and were excited to get things rolling.

Of course, any good tattoo shop won’t be available to fit you in right away, so we were told to come back in a few hours.  Alright… let this crazy, amazing day continue!

From there we heard Borders was going out of business and decided to go in and see what we could find.  Scott found a handful of biographies he has been wanting to read and I found a great cookbook to add to our newlywed cooking collection.  At the store, Scott’s friend from Seattle called him and wanted to get together to catch up, and just like that we were off.  As we were pulling up to one of my favorite “wine-down” places, I joked that I am such a COOL WIFE today!  So laid back and ready for anything… I guess that’s how I am when he goes out of town and gets home on my two days off!

Catching up was great, and before we knew it it was time to head to the tattoo shop.  I was nervous because obviously this was going to be my first tattoo… but I knew I’d be okay once we got going.  Well – shocker…I forgot my ID.  I actually had been going without it the entire day and at the most important time someone finally asked for it (dang changing purses!)  Since we were already there, signed the paper work and had the monogram drawn, we agreed that Scott should go ahead and get his done and come back the next day for mine.

Of course, taking the pain came naturally for him.  He has three other tattoos so he knew exactly what to expect.  I was actually more nervous watching him than I was for mine!

I’m glad things worked out this way because originally I wanted to get HBSH on my wrist.  When we got to the shop, they wouldn’t do it small enough for my liking to be on that small part of my body.  I needed a back up plan.  My hip? My side? My foot? I had no idea where I wanted it to go now.  Forgetting my ID was a blessing in disguise because I had another day to really think about it.

Today, we spent cleaning, organizing, cooking and finally went to get my tattoo.  By this point, I was really pumped up to get it done already and was 100% sure I wanted it, and where.   Here we are on the way to tattoo attempt #2:

I decided to put it on my right foot, and I’m really happy with how it turned out.  The guys at Black Chapel were great, and I would recommend anyone looking to check them out…

Oh…did it hurt?! Umm… not really… JUST KIDDING it KILLED! Granted, the foot is a sensitive area and the closer I got to the edge of my foot the more I dug my nails into Scott’s hand.  But, it only took about ten minutes and eventually I somehow got used to it.

When I got home I couldn’t wait to clean it off, lotion it up and take some pictures.  Mind you, there’s some swelling going on…so this isn’t the final look of it, but just so you can see what I’m talking about here she is: 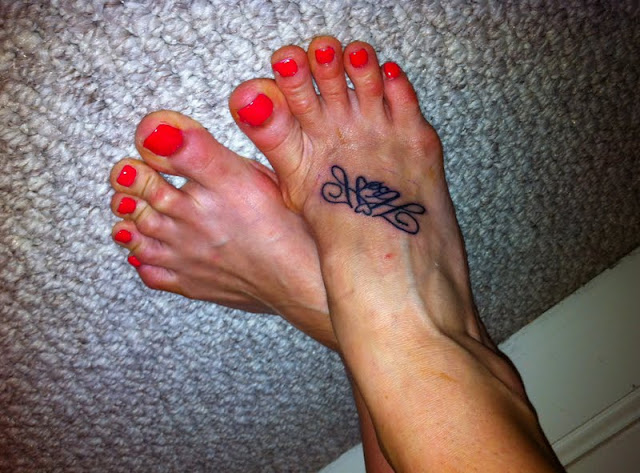 And the best part? I feel like our marriage is finally official.  Sounds weird, but it’s true.

How many of you out there have monogrammed or any wedding-related tattoos?